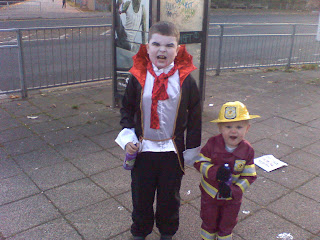 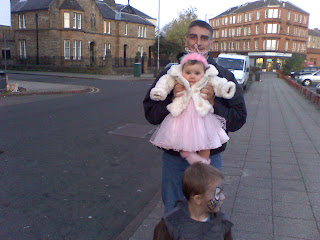 There are plenty of children dressed up and ready to get up and dance, tell a joke or sing a song for their Hallowe'en.

Most of the costumes are ready-made-bought-from-shops, and include ladybirds and skeletons, fairies, spiderman and other superheroes, a couple of witches and quite a few vampires.

On Langlands Road, a few guisers are happy to pose for pictures as they make their way home to begin an evening of guising around the doors.
At the top of Shaw Street, a skeleton is being lectured by her ma.
"Don't you bother aboot whit they say, just remember 'Sticks n stones'll break ma bones, but names'll never hurt me".
The skeleton is about 10 years old and is shaking her head and saying, "Aye stanes dae hurt ye".
A Samurai warrior is standing at a close mouth and the ma calls to him, "Ye comin up later for Halla'een? Wir daein dookin fur aipples."
"Ur ye gaun oot trick'r' trea'in?" calls the skeleton.
He nods stiffly, in the style of a warrior. 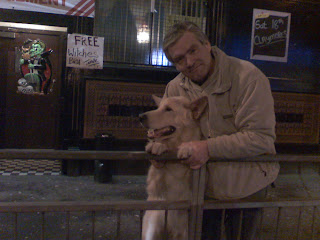 At nightfall, guising is in full swing. A warlock and his familiar stand outside the Old Govan Arms where a free glass of witch's bru is on offer between 7 and 9.
A few teenage girls dressed in pink cowboy hats and very short skirts hang about outside the Cosmo chippie on Govan Road.
A gang of four 10 year old boys are buzzing about the streets dressed up in makeshift costumes. They stop at the side door of the Harmony Bar and the barmaid sends them straight inside where I am sure the punters will be generous.
Two ghouls are fleeing up and down the streets of Govan. One wears a mask of "The Scream" and the other has a grotesque mask which he often pulls off to reveal a wee freckly, bespectacled face.
Posted by Nihil Sine Labore at 23:41

thats a dead good costume that wee boy has on in the bottom picture!