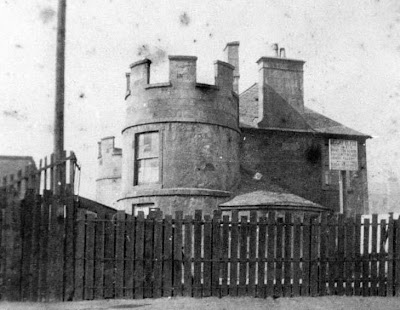 "The Hunty" (haunted house in Kintra Street, Govan)
Guest blogger Tillie shares scary Hallowe'en memories
For Hallowe’en, my favourite outfit was a witch. My dad made a brilliant witch's hat and I even had a broomstick and an artificial black cat. Lots of us used to dress as a gypsy. My mother would put one of her black skirts on me all tucked in with safety pins and another black skirt would be fashioned into a cape. This would do as either a witch or a gypsy. As a witch I would wear a tall pointed hat made with black crepe paper, along with my broomstick and dummy cat and as a gypsy I would wear a pair of large gold coloured curtain rings tied round my ears with thread and a sort of bandana style head scarf. Of course one would carry a pack of cards and a crystal ball. Mine was the top of a glass dish which had a round glass ball on top. I used to gaze into it, as in those days I did believe in magic. I liked to think I could see moving shapes in it and could tell the future.
Another thing I remember about Hallowe’en was going to school with my lantern. It was a turnip carved hollow with a face cut out of it. My daddy used to make one and a candle burned inside it. What a strange smell - we were used to the smell of boiling turnip in soup or as a vegetable - but the lantern had a roasted smell mingled with candle grease. We took the turnip lanterns round the doors with us when we went Guising.
In Govan we used to stay out quite late, going to everyone's house we could think of. After we had exhausted the list of relatives we would start on friends and neighbours.
First, me and my pals would visit my two Grannies, where we were sure of a good welcome. My maternal Granny was first on the list as she only lived round two corners, in Neptune St. (nicknamed the Irish Channel) and indeed she had been born in Ireland. Her close was the scariest ever, as it was badly lit and she lived on the top floor. My mother's cousin Bridget was usually in there waiting on us; a young war widow she would always be reduced to tears at my recitation of the poem "The Slave’s Dream". Very sad, and not a terribly appropriate entertainment for Hallowe’en. However we would be sure to cheer them up with a musical selection starting with "Roll out the Barrel."
We would then set off with our bags (not plastic) a little heavier.
For our Hallowe’en, my friend and I would act out a little play that we had made up, in which my pal would be the beautiful Princess Veronica and I would be the handsome Prince Gavin. This entertainment would finish with a “waltz”, no matter what costume we were wearing. In other houses we would do our version of "The Highland Fling” or sing "If you ever go to Ireland".

Next we would wend our way towards my other Granny’s and on the way there we would stop at the Castle in Kintra St. where my friend’s Auntie Mary lived.
“The Castle” was actually Broomloan House, a small 19th century mansion predating the surrounding tenements. Eventually it was sold and subdivided into flats itself. Rumours abounded concerning ghosts in and around the 'castle' - so much so that local children referred to it as 'the hunty' (lit. 'haunty' or haunted house).
One Hallowe’en night, Auntie Mary had a treat in store for the guisers. When we arrived she told us she was going to take us to visit one of her neighbours. She made sure that we all had our lanterns lit and we formed a line behind her, "Follow me and don't utter a word" she declared in a sombre tone.
As soon as we were all out in the close, she closed her door leaving us in the pale flickering gas light. Beckoning, she began to ascend the spiral staircase, we guisers all shaking in our shoes. At the top of the stairwell we could see the turrets through the stairhead window. What a fright when we heard Auntie Mary's voice ringing out in sepulchre tones, as she knocked loudly on the first door. It opened suddenly and there stood an old witch dressed in a cloak and clutching her broomstick. While we stared in horror, loud music erupted playing an Edie Cantor number. In seconds a bright light came on in the lobby and the old witch began dancing with her broomstick. She laughed and called to us to come in and join the party.
Feeling a bit daft at having been so scared, we hurried inside and found a big cake on the table which Auntie Mary had made for us, and on the floor was a basin of water filled with apples for dooking.

My other Granny, at Elphinstone Street, was our last port of call and there we would have quite a little party, drinking Granny's homemade lemonade and eating her famous shortbread. After our performances and feeling a little tired we would set off for home, my Grandpa insisting on "seeing us roon the road".
Posted by Nihil Sine Labore at 08:12