At the Going Down of the Sun, and In the Morning, We Will Remember Them 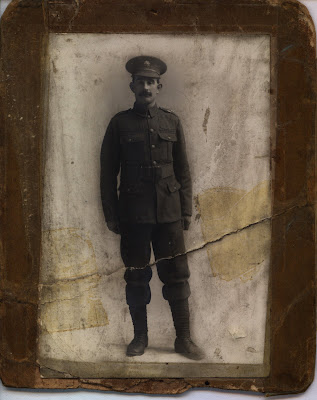 Personal memories of Mary Fernie, born 1905.
My father was in the Scots Guards and had served in the Boer War. Everybody knew him as Big Jock Fernie. Mother met father in London outside the Palace when he was on duty. They got married and lived at Plantation. My father worked at the docks, but when the First World War was declared, he was called up.

After my father was killed, my mother would go with my brother to meet the trains bringing the wounded home between 10 pm and midnight at Central Station, just incase she'd see my father coming home as a wounded soldier. She wouldn't believe he'd been killed so for months she'd stand up at the station. At Bellahouston Park she'd go up to the hospital huts and look for him or some of his friends. Everyone was crying at the sights of the wounded men.
Finally when they sent his belongings back to her she realised he was dead.
He'd taken a picture of all of us children and he must have been holding it as he was dying because when we got it back, his fingerprint was on it in blood.
Months later my mother met a soldier from the Scots Guards who was with him when he died. He said my father had gone out of the trench - they'd been told to charge - as he'd been running across No Man's Land there was an explosion. This man stayed with him as he was dying and my father asked him to take out our photograph and he held it as he died. 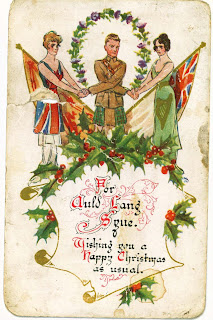 A Christmas card sent from John to his daughter Mary in 1914. The inscription reads:
"Dear Tissie, Just a line from Dad. I hope you are well. A merry Christmas to you. Give my love to all. Goodnight, hoping you will enjoy yourself tomorrow. Hoping to see you soon. xxxxx J.F." 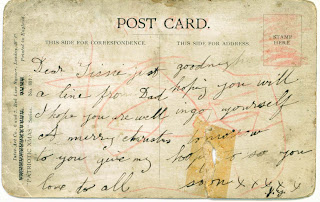 What a sad story. It brought tears to my eyes when I read of his widow going to Central Station in hopes of seeing him among the injured. And all these years later, we are still losing young men and women ~ when will it end?