Tillie Tells A Tale: A Snowy Day in Neptune Street 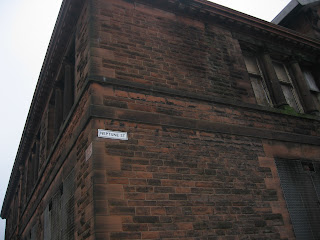 Welcome back to guest blogger Tillie, who Tells a Tale of a snowy day in Neptune Street, 1944During the Christmas holidays, when I was eight years old, I awoke one morning and ran to look through the frosty panes of my bedroom window. My whole being was filled with exhilaration - the snow that had fallen the previous night lay deep and white, and even better, there was no school! I could build a snowman, and help my friends make a slide.

I quickly got ready and as I ran out of our close in Broomloan Road a fresh fall of snow was gently descending. I turned into Brighton St, where children were having snow ball fights and rolling out heads for snowmen, and then into Neptune St, where I was far from prepared for what I was about to witness.

I had come from a wintry wonderland to a wintry nightmare as I was met with a sea of people jostling together and craning to get a look over each other’s heads and shoulders. Some were shouting and a woman was sobbing. I squeezed myself through some of the little spaces in this dense crowd and was soon on the inside edge of a large circle of people surrounding a coal wagon. From here I could see that a terrible accident had occurred. One of the great Clydesdale horses had slipped and fallen onto its two bended forelegs.

The local coalman was Charlie Macdonald. He was a tall skinny fellow who wore very thick glasses, not at all the type you’d imagine would be heaving hundredweight bags of coal on his back to the top of three storey buildings. I had always thought of him as slightly crabbit, although from that day onward I forgave him for anything.


Charlie had removed the halter and trappings from the horse and I could hear the voices around me muttering, “the vet will come…” “It’ll have to be shot…..” “Oh please God, let the horse get up….” I joined the latter group in a silent prayer.

What a hard task! Charlie bending right down would push one arm in between the horse’s front legs and putting his arm around its legs he would slide his shoulder under the horse’s breast and heave with all his might. Taking the weight of the horse onto his back he would hoist it up onto all four hooves, but just as Charlie tried to withdraw, it would lose its footing on the extremely slithery surface, sliding once more onto its knees. We spectators all held our breath in unison and gave a gasp of despair at each failed attempt.

Now the crowd became silent and intense. Everyone was willing success for the hero, Charlie Macdonald, who on that very cold December day was sweating great drops from his long nose. The horse was a hero too. I had made it to a ringside vantage point and could see the fear in its eyes and hear it whinnying in terror but I was sure the creature was doing its best for its master.

They say “third time lucky” and that was the case. Charlie saved his precious horse and went on with his work. The crowd dispersed and I went on to play in the snow, but that memorable event is one that will stay with me until the end of my days.
Posted by Nihil Sine Labore at 20:16

Tillie, I'm so glad that story had a happy ending. My dad once told me a similar story (think it was in Harmony Row) and the outcome wasn't a happy one.