Anyone With Information Can Call Police on . . . 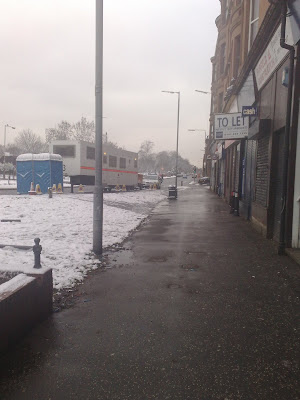 A police incident van is parked on Govan Road at Golspie Street in the hope that someone will come forward with information on a murder which took place here earlier this week.
A lad in a beanie hat stops for a chat in the freezing weather. We are conversing about the youngsters and the not so young who are engaging in a spot of violence now and again.
"Thir aw aff thir heids these days." he says, "There's Turtle. Stabbed 'im up at the Wine Alley, he staggers doon here, they chase 'im an kick 'es heid in. An he wisnae young; twin'ty five ah think. Ye've goat tae watch noo."
"Who done it?" I ask.
"Aye, well, ah think they've picked up two furrit".
A window above us opens and a fat man with a beard and his sleeves rolled up leans out.
"Howje hink they'll dae the night?" he shouts down.
Rangers are playing.
"Ah'm hopeful. Ah hink Milan'll be at a disadvantage wi the cauld an that."
"Aye, me an' a'".
Posted by Nihil Sine Labore at 22:51