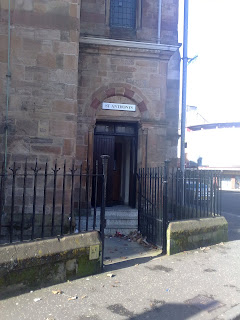 A gusty wind scatters dead leaves and paper pokes at the side door of St. Anthony’s. I slip inside to ask when today’s special services will be on. A friendly lady is polishing glass in the side chapel and tells me there will be one at half twelve and another at half five. I’ve missed the one at ten o’clock.

The front doors on Govan Road are open when I return at twenty-five past and there’s a steady stream of the devout heading inside. As the people enter, they dip their fingers into receptacles of holy water, dab it on their foreheads and make the sign of the cross. There are only a few seats left in what I think is the overflow area which is separated from the chapel proper by glass partitions and so I sit down quietly on the back row.

Inside, the chapel is beautiful with light walls and a dark wooden vaulted roof. At the front the ceiling is domed and painted azure blue. From where I sit, I can see a large statue of Christ on the cross, and a statue of a woman – probably Mary, eh? – stands with her back to me in the corner.

The priest is speaking in his soft Irish lilt. He says he used to think Lent was about him giving something up, but that’s a reflection of the materialistic world in which we live, where it’s all about I, I, I. Rather, he now sees it as a time in which we could give up in a different way; make time to do a good deed to another, do something that will make another person’s life better. Between now and Good Friday, could we all try that and give that gift to God?

Now is the distribution of the ashes. The worshippers rise in an orderly fashion, moving to the front. All ages are present here, except teenagers and children, who will be at school I suppose, or roaming the streets. Elderly men and women, and the middle aged and the young, shop workers and office workers, the genteel and the down at heel; all have come to receive the mark of the penitent on their brow. As they walk below the statue of Christ, each kisses their fingertips and presses them to the feet of Jesus in an attitude of reverence and love.
Some people return to their seats for the Mass whilst others leave.
“Ah’ve just nicked out at ma dinner time” says a girl to a young man.
“See ye later” he says.

A woman sings a hymn at the pulpit in warm Glaswegian tones. A few people here and there mumble along with her. There’s no organ playing, although I can see organ pipes. It’s a sort of modern hymn, which is a bit disappointing. I wonder if you ever hear Latin in the chapel now. I’ll come back another time to find out.
Posted by Nihil Sine Labore at 22:56

Thank you for that description of the chapel and the rituals, something I've never witnessed. I was only ever in the chapel once, as a child, and remember thinking how wonderful it all looked but feeling slightly afraid at the same time. (I think the statues scared me a bit!)

right very good well done that was yet another good read

I was only ever in St Anthony's once as a child and it was close to Christmas. My friend took me in to show me the Nativity scene. I remember a nun spoke to us but we hurried out ~ I was afraid I'd get a row for being there because I wasn't Catholic!