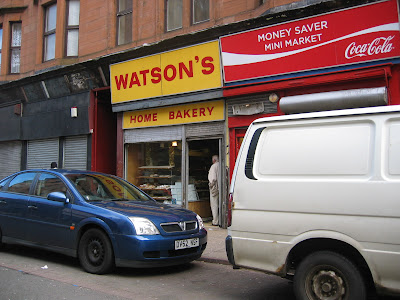 Sometimes I get a panic attack when I walk along Shaw Street, that Watson's will be closed down. But so far it's been fine. I've done a few sessions of psychotherapy on myself to try and find the source of my fears and actually, it's easy to trace; dearly loved shops of Govan (not that you knew that you loved them at the time) well, there's none of them there now. Well is there? A few perhaps, but they are mostly a sad mockery of their former glory. Except Watson's.

I am going to begin a project today to record Govan's shops, 2009 and if possible, contrast them with their counterparts of yesteryear. Then we'll see just how much of a panic attack I should be having. 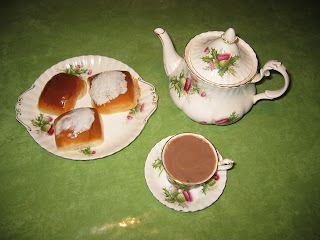 An in-depth examination of Watson's Home Bakery is essential because it hasn't changed in all the decades I have shopped there. The lady in it told me it has been there for over 70 years, so I suppose the red and yellow fibreglass sign is a nod to modernism. However, this is a great bakery with very nice, friendly staff and an excellent range of delicious home baking, all at very, very good prices.
Today we're going to start with the variety of buns on offer at Watson's. Click on the photos to enlarge them and then you will almost be able to taste them too. 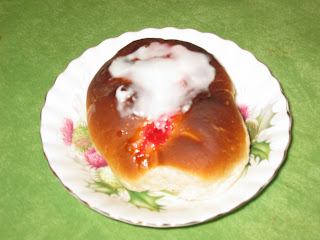 This tasty bun has a dash of icing and a jammy surprise. 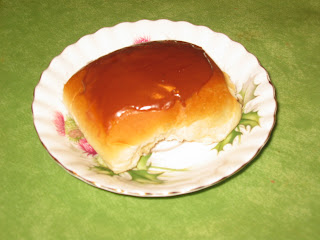 This bun comes in white icing or chocolate icing. I bought both kinds but couldn't resist eating the white icing one before we took the photos. 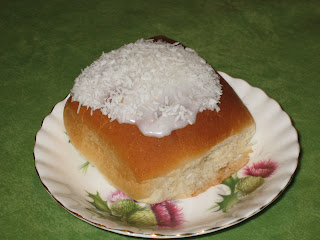 I think this bun with white icing and a generous sprinkling of coconut is my favourite. If you were to offer me a plate of buns, this is the one I think I'd choose. 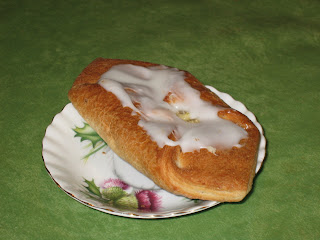 This is more of a pastry kind of bun and has a lemon twist to it. It's nice, especially with the icing, but I'd never normally buy one of these. It did get eaten though by the cameraman after the photo shoot.

Someone I know claims the buns are actually morning rolls with icing on top, but she's wrong. The inside of the buns is much more dense and sweet than a roll.

Yum yum, and thanks to my granny for the beautiful china tea service. More of Watson's fare to follow.

Apologies for no photos since ma camera got tea-leafed
A clown dressed in a lime green romper suit with yellow spots and a mass of frizzy green hair is mooching about Govan X. It's shaking a red bucket up and down, looking for money for comic relief and then settles into a serious conversation with a chap at the bus stop. I nick by him, heading over the road towards the Bank of Scotland. Parked at right angles to the kerb sits a police car and an ambulance. A couple of polis stand above a middle aged man who is lying face down on the ground in the recovery position. Someone has very kindly put an old brown velvet scatter cushion under his head. There's no way past on the pavement, so I swerve back onto the other side of the road and hurry on my way to the bakers.

The streets are busy today, lots of pedestrians walking to and from the Cross. The weather is a bit blowy, and cold - typical March but quite pleasant. As I approach the corner of Shaw Street, the police walk briskly along the other side of the road; a tall man and a stocky wee woman, who look like they mean business. They head straight for Richards pub, push open the door and are swallowed into the den.

Inside Watsons it's warm and homely with a delicious array of cakes and icing buns on display. It's well into dinner time but still busy and they're short of hot stuff now. Plenty of pies left, but only one sausage roll.
Two schoolgirls are in the queue with their noses smeared red. "Ye's collectin fur rid nose? Here ye go," says an elderly man and he pushes a wee bundle of coins into one girl's hand. They look a bit bewildered and shy at the attention that is turned on them.
The shop has filled up with customers and the queue is stretching out of the door and down Shaw Street. I gather up my pies, the last sausage roll, coconut icing buns and apple round and step out into a squally shower.
The police are just emerging from Richards at the same time, on their own, no arrests. They march off down to Govan Cross, shoulders back, creating a presence.
Posted by Nihil Sine Labore at 19:52 1 comment:

The Street Where I Lived - pics from today 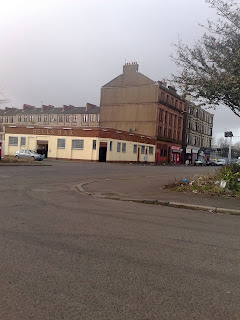 click on the photos to enlarge
Burndyke Street/Govan Road; view of the Bells pub and the site of Dan's now demolished tenement home above it. The back of Southcroft St. tenements are also on view 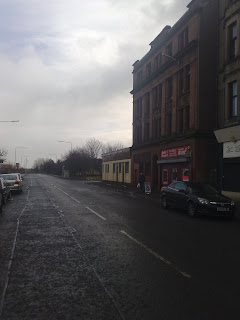 Looking along Govan Road at the Cossar building 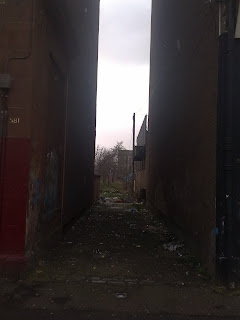 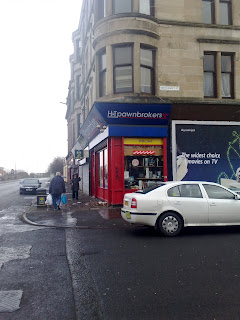 The Pawnbrokers at the corner of Govan Road and Southcroft Street
is still doing good/bad business in 2009
Posted by Nihil Sine Labore at 19:53 No comments:

The Street Where I Lived

Hello again to guest blogger, Dan, who takes us on a tour of his bit of Govan Road

Well, what do you know? It would appear that quite a few people read and liked the ‘piece (in the words of Ernie Wise) what I wrote’, when I guested in Lady Govan’s blogspot prior to Christmas. One even asked for more, and since I enjoyed the submitting and the comments received, I hope that you will forgive me for indulging myself again as I record a little of the Govan of yesteryear, with the hope that it may provide someone out there in cyberspace a little bit of cheer too.

My family lived at 571 Govan Road, next to Burndyke Street, ‘kitty-corner’ to Princes dry-dock. There were five boys, two girls and mother and father living in a two bedroom and kitchen house with inside toilet, but no bath or shower.
Are you wondering where or how such a big family slept in such a small house? So am I, so if you can figure something out, please let me know! My father worked constant nightshift so he slept during the day - still we lived in that same house from 1935 to around 1960. To add to your puzzlement, at one point we actually had a lodger stay for a short time, I think to help out with the rent.

I attended Copeland Road School and please note the spelling of the School as against the Street spelling. Miss McKenzie made sure that everyone should know that the school was there before the street was named -- so stick that in your pipe, and smoke it! After ‘passing my quali’ I made it to Govan High School and it’s really the walk - four times each day (aye, I used to come home at dinnertime for a plate of ma mammy’s soup) - from 571 to Govan High that I was going to base my ‘soaking in nostalgia’ blog at this time.

As I mentioned our close had ‘The Bells’ (Campbells) pub in between us and Burndyke Street. We had some great games of football in that street and I remember some keenly ’fought’ matches with the ‘Hoey Street’ gang.
The other interesting thing about Burndyke was that there was a ‘Seaman’s’ Mission at the bottom of the street, used mainly, I believe by Chinese sailors. Infamously, one of the sailors stabbed a young Govan man to death - right across the road from our window.

Our close was known as the ‘Jew’s Close’. Mrs Wilkie, who always reminded us of old Mother Riley (she wore those same gloves with no fingers in them) ran the dirtiest and darkest newsagent shop you could imagine with cats everywhere.
Next to the newsagents was Dicksons’ Dairy, a small dairy, right below our house. I don’t think the coakroaches liked it very much, because they kept emigrating up to us - I still have a hatred of the black, slimy creatures.

The Govan Press office, next to the tram stop was quite palatial (certainly compared to Wilkies’) with large plate windows and an inset door. This was just the front office to a printing factory and warehouse which stretched all the way from Govan Road, the length of Burndyke Street.
At the back of the property was a three-storey building where the ‘Presses’, Govan, Renfrew and Clydebank were typeset and printed.
There was a huge printing machine, a Cossar, which bore the name of the owner of the business. I believe it was Mr Cossar’s father who had invented or built it.
My first job on leaving school, was message boy in the Press office, and I was given the chance to sit the ‘printers’ apprentice’ exam. It was very difficult to get a printing apprenticeship, only one apprentice per four journeymen was allowed - and that ‘one’ would usually be the son of a compositor or a machineman – so I was very pleased when I eventually managed to get the apprenticeship.

Back to our journey along the Govan Road; we’ve not got very far, only to the ‘Press’ Building, but it is worthwhile dwelling here for a few minutes to see the beautiful and interesting architecture and famous figures of Gutenberg, Caxton, Burns and Scott - not to mention Mr and Mrs Cossar themselves - sculpted below the windows of the houses above the office.
The Press building and ‘close’ (but not the factory or warehouse) are still there, looking a bit forlorn amid the devastation and clearance of all ‘that once was’.

Next to the Press was ‘Coffee Joes’, a very, very popular eating place, mainly for shipyard workers, when Govan was thriving. I remember it was a great place for a ‘bag a’ broken biscuits’ when we were wee and if you were really lucky you might find a wee bit of a chocolate biscuit among the crumbs.

There was a lane just before Runcimans’ the Chemist, which led to John Smeaton, Wrights. We always looked upon them as a joiners’ yard, and there was a great feeling and an atmosphere of friendliness about the place. The lane was also the site of an engineering workshop in a small garage-type building.

Very important - to our family - down the lane was a small back door opening to the Southcroft Street Pawnbrokers. I say important, because it allowed whoever of our family was assigned on the Monday morning, to slink through the backdoor with the suit which had been ‘redeemed’ by wages received on Friday night - allowing weekend use - and then the suit returned on Monday to get that little bit of money that would help until it would be needed on Friday again. Unfortunately, I’m sure that scenario must have gone on for years; I seem to remember being too small to see over the counter in the cubicles.
Looking back, my mother appears to me like one of those jugglers trying to keep balls in the air, or exemplifying the adage, ‘robbing Peter to pay Paul’. She was quite wonderful, she knitted, sewed, mended and bemoaned the fact that she could not make shoes - especially with five boys who were forever ‘kicking the toes out of theirs’.
Posted by Nihil Sine Labore at 17:12 3 comments: