And Another Thing; What's Gonny Be In It's Place??? 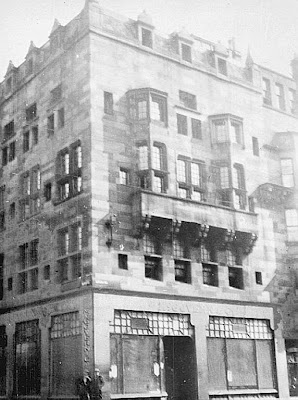 Just after teatime, Ned arrives and slings the free rag he picked up at Elderpark Library over to me. The headline reads,
"END OF THE ROAD FOR TRAFFIC HELL
'Danger' building will be demolished"
There is a photograph of Napier House, the old model lodging house on Govan Road with the caption, "Coming down".

John 'Wide as the Clyde' MacLean rants on about "six months of hell", the "misery", the "total nightmare" endured by all who had to drive an extra quarter of a mile diversion when the council closed Govan Road because the 100 year old building was suddenly going to crash down around our heads.

Residents are fed up with extra traffic carousing through the side streets and Summertown Road is apparently pitted with potholes now (haven't noticed anything different from Glasgow Council's usual neglect).

Three skanky businesses apparently have gone under due to a lack of passing trade. Well, that could only be the couple of shops that are directly under the model lodging house itself and now they are going to be CPO'd and demolished along with the rest of this historic building anyway.

Councillors and MPs are pictured, smugly declaring that they are responsible for hurrying along the demolition. They don't even care enough to put up a pretence of being concerned about conservation, architecture, preservation, history, or even - culcher!

I cast the paper aside and feel so down in the dumps. The road's been shut for ages, it's true. I have been hoping they were going to shore it up, make it wind and water tight and then turn it into flats. Can you imagine living in there? Living in grandeur in a stately home of red sandstone; the view out your window, across the river, up to the city and doon the watter, ships passing and birds flying, sunshine in the summer and howling wind and rain in the wintertime.
And now, we've no chance of making this a reality cos those cretins are pulling it down. You'd think they would have learned by the 21st century, after all their idiotic, shambolic, criminal mistakes in the 60s, 70s and 80s that we're still living with. Scream.
Posted by Nihil Sine Labore at 09:23

I've just had my attention drawn to your blog.
There are some nice pieces in there, and the article on midgie-raking brought back a few memories of growing up in the Oatlands.
Howevvah . . .
As the Editor of the local "rag" (also known as The Govan Press), I was disappointed by the sneering tone of your comments on the closure of Govan Road.
You seem to have little sympathy for the plight of local residents and shopkeepers over the past six months.
It is clear, though, that you would have relished the chance to take up residence in the building, which was allowed to degenerate to a dangerous state by the negligence of its owners.
Well, it might have made a change from your Ivory Tower.
Rant over.

I stand chastised for my unkind remarks towards the shopkeepers concerned.
I know it is difficult to make a living in an area that has been decimated and de-populated. I am sure this is the reason they are charging exorbitant prices for the goods in their shops, some of which are 3 and 4 times the price of Sainsbury’s in Buchanan Street.

I, Sir, am dismayed that you are content to write such a one sided report on the destruction of yet another historic building in Govan.
As the Editor of “Glasgow and Govan South West Press”, you are a powerful man.
Come on! What about a challenge to these politicians? Take them on instead of giving them voice and indulging their short sighted, utilitarian attitudes.

And as for my Ivory Tower; where else would’st thou that a lady should dwell, Sire?
Come aloft - the view is splendid!