Midgie Rakin' As An Education 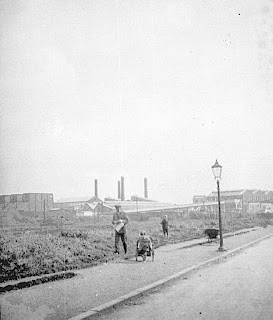 Hello again, I thought I might share a word or two about a subject that I found very difficult to discuss in the playground in the 1950s. This was of course the art of midgie rakin', which is, for the non-Govanite, searching dustbins or middens as they were affectionately known.

I was brought up in and around Burndyke St., and my playground was the empty tenements and the bombsites of the surrounding area. Having a large number of younger brothers and sisters, I very quickly learned that being an explorer in a deserted tenement was a great way to dodge the ever present chore of "watchin' the weans".
Now the empty tenements of Govan were a great source of fun and learning for many a youngster and there were wonderful things to be had, like doors for building gang huts, old enamel hearth plates which could be bent over to form a sort of sledge which would provide hours of fun when carried to the nearest hill.

For me there was also the possibility of finding some items of value, however meagre, that could be traded for a few pennies at Mary O'Hara's rag shop, an establishment well known to my mother as well as may other Govan women who struggled to clothe large families on very little money.
Mary O'Hara's was situated behind Orkney St police station and was a sort of Victorian cavern with a great pile of old clothes in the centre of the floor that people picked through in search of useful items.
In one corner there was a large iron scale for weighing the goods brought in by the totters or rag men as we called them, when they had spent a long day exchanging balloons or sometimes even goldfish for any rags or scrap metal that the kids could persuade their parents to part with.

For my part I would remove old brass door handles, gas lamps, or any item that looked as if it would be worth something. Some of the empty flats would still have items of furniture in them and even pictures hanging on the walls, so when I had gotten old enough to make myself a pramwheel bogie I would put anything I deemed to be treasure on the plank and haul it along the Govan Rd.

Another source of income for me was the much frowned upon practise of "midgie rakin' and this, having begun in Southcroft St, expanded until I would take myself off on a Sunday morning to the far reaches of the top end of Copeland Rd., and even on occasion into Bellahouston.
Whilst this enterprise did in fact sometimes yield a few pennies, I had this great obstacle in my way when, having been rewarded by Mrs O'Hara and headed off home along the Govan Rd, I would find myself at the counter of Sicci's cafe where many of my great plans and good intentions would pass over the counter, leaving me with a full belly and empty pockets.

I went on to become an antiques dealer many years later, but I will ever be aware that the beginnings of my education in the trade, however humble, were in those back closes and bombed out buildings.
I have spent a lot of time over the years at antique fairs and auction houses seeking the rare and unusual, but even to this day I remain convinced that the best treasures I ever found were those found in dear old Govan.
Posted by Nihil Sine Labore at 09:41

my mum grew up in Govan and I remember her telling us about getting balloons for old clothes. Thanks for the stories it opens up a whole world I wish I had known. Hope one day I'll get to see Govan itself.