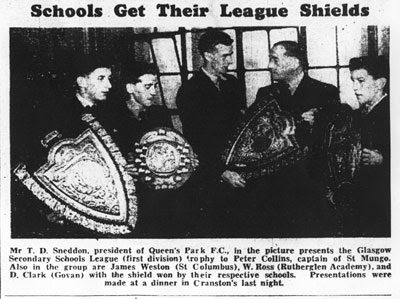 I love this account from guest blogger Dan who takes us back to the football of the streets and playgrounds of old Govan.

Has anyone ever asked you, ‘how do you know if you are in love?’ The question was asked of me by a friend when I was much younger, and I am quite sure that it has been in the mind of many people over the years, perhaps, in most cases, thought - but left unsaid. I don’t remember giving more than a mumble when it was asked of me; could it be described as one of life’s ‘imponderables’, like trying to describe the taste of salt to someone.

A strange way, I suppose, to introduce ‘My Latest Blog’. But having been asked to write a bit about playing football in my young days in Govan got me thinking about my obsession with ‘the beautiful game’.

My earliest recollections of ‘kicking the ba’ go back the school playground in Copeland Road Primary School. I have since - about fifty years later - had a look at the school playground. It looked so tiny, hardly big enough for a game of ‘wee heidies’, let alone two sides, each of ten wee boys running, all chasing the ball. I can’t remember how many were on each side, but I’m sure that there would be about that number per team.
We played before the 9 am school bell went, and again for about fifteen minutes in the morning playtime; after lunch there would be a game for about 30 minutes before going in to classes; and when we got out of school at 4 pm we were at it again - often lasting for over an hour.
We played, generally, with a tennis ball - referred to as a ‘tanner-ba’ (a tanner being a sixpence in old money) and later, many of the professional players would become known as ‘tanner-ba’ players’ - because of the tricks and ‘keepy-uppy’ they could do with the ball.
There was a variety of other balls; solid rubber (almost like a brick), and there would be times when old newspapers would be ‘scrumpled-up’ and bound with some kind of tape, and kicked around until the whole thing unwound. Such intensity, oblivious to the fact that we were kicking around one page of a newspaper - must get the game finished with the result of the match being the only that mattered.
Team selection could be a ‘real lift’ or a ‘complete downer’ depending, mostly, on how skillful you were or, alternatively, if you were able to bestow ‘favours’ (like sweeties) on the person doing the selecting.
Imagine the scene: two boys standing out from a line of about 20, sometimes 30 eagerly expectant boys, all looking to be selected to play in one of the teams. If there’s 30 and it is just ten a side, there’s going to be ten disappointed, or even ‘gutted’ boys.
It would, naturally, be the two boys considered to be the best players who would do the selecting. Toss up for who gets the ‘first-pick’. Of course, he’s going to go for who he considers the next best player. Turn-about in choosing who’s next, right down the line of expectant faces.
When I think of the impact that ‘the deciding’, ‘the judging’ of who was ‘next best’ had on young boys, around 7-10 years old - on the one hand, thinking you were the greatest if you were among the first chosen, and so devastating to be left on the sidelines. It seems so cruel, and I would think, almost life-changing or character-forming (or destroying) at such an early age.

On with the game then. Apart from the selecting of teams there were times when, if there were only a few boys around, a game would start with 3-a-side, and then as others appeared they would be allowed to join in -’cock or a hen’ - one for each side, the two newcomers would have decided who was ‘cock’ and who was ‘hen’. This procedure could also be fraught, since the ‘hen’ might be a much better player than the ‘cock’ - but, of course, it was just the luck of the draw. Nevertheless, it justified a few moans - either way.
No referees, no trophies, no showers, no half-time, for some no full-time (‘ah’ve just remembered that my Mammy told me to come straight hame after school’).

What do you know? I’ve just remembered some of the reasons why I love football so much.
Posted by Nihil Sine Labore at 09:40