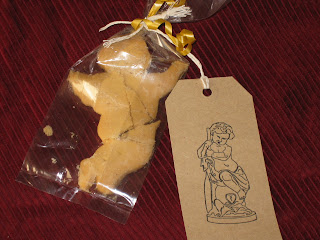 The back of the card reads, 'In 1884, the people of Govan built the Aitken Memorial Fountain at the centre of Govan Cross to honour one of their own, Dr John Aitken, who had died working to improve public health locally. At the centre of the fountain was a statue of a cherub - 'The Govan Baby'. Having stood for over 100 years, Govan's Baby disappeared in the 1990s and has not been seen since. It is a small symbol of all that has been lost at Govan Cross.'

Funny that, how I was just thinking about the fountain at Govan Cross about 2 or 3 weeks ago, googled it, and found out all about the good Dr. Aitken.
Then yesterday, I saw two men inspecting the fountain and measuring it and discussing it and I thought, oh no, please don’t be dismantling this now.
And then, today, I sees a crowd mingling around the fountain and banjo and fiddle music playing out of a white marquee against the wall which divides the waste grun from the slabs wherein the fountain and the public lavvies are set. There’s a giant mobile screen with rolling captions which says this is done in partnership with so and so and such and such and this one and that one.

A dog walking buddy is wryly watching on the periphery.
“Another waste a money likely “ says he, curtly.
“Is this for the fountain?” says I.
“Ah think it’s for the church,” he says. “That bit a grun belangs tae them. That’s how they pit that tarmac doon, so’s the market couldnae get oan it.”
He shakes his head, scunnered.
Two guys are footering nearby with a tv camera and a big furry mic.
“There’s the telly,” I say, “Go’n on it.”
He snorts. “Aye right, Ah’ll get taken away in a van”.

On the bench behind the marquee sit a few gents, enjoying a swally. They wander round to the main event and I ask one if he knows what this is for. They all join in with, “Don’t know”, “We jist put up the marquee”, but one, knowledgeably says it’s cos there used to be a baby in the fountain and then the council lost it or something.

A lady comes up to me with a basket of shortbread cherubs and I take one out, which is unfortunately broken, but I just keep it anyway.
“What’s your wish for Govan?” she asks and writes down my answer on the back of a card.
Posted by Nihil Sine Labore at 20:39