It's a great procession tonight - best I've seen for ages, since I was wee and the floats were amazing and threw things out at you, like wee tiny loaves of bread, sweeties and biscuits. Well done to Thos. Tunnock who maintains this great tradition with Caramel Wafers aplenty.

Big Dave got chips out the Cosmo earlier on and shared them round. They tasted great and as we're starving we head back in that direction as the final float passes on by. 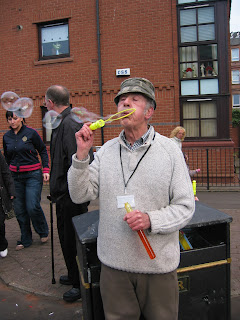 Then surprise, surprise! Who else do we see but Harry the Hat, counterfeiter extraordinaire, whom I erstwhile assisted in forging £50 notes.
I hail him with a "Long time no see Harry! Where you been?"
"Hello hen," he replies, "How's everybody? I'm onto the bubbly the night."
He is blowing bubbles through a long wand and a bag of them for sale lies at his feet.
He poses for a coupla pics and we go on our way. 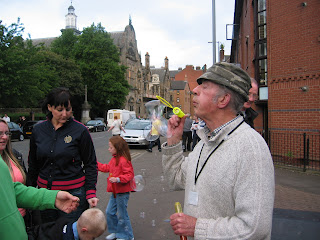 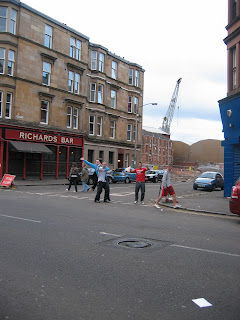 There's a nice view of a shipyard crane over the Howat Street tenements and I take a picture. Passing youths strike a pose and there's mirth and laughter in the air. 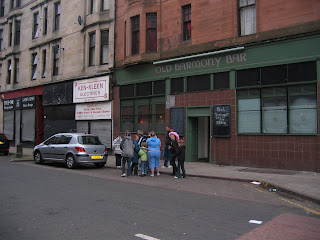 well how fun, to see all thes festivities in pictures! The goven baby I'm not too sure about...

Geat photos, and much appreciated by those of us now living far from Govan. It's wonderful to see that the Govan Fair is still as popular as it was when I was a wean living in Pearce Street. My favourite float back then was the Southern General one, with the patient running along Govan Road being chased by the doctor armed with a saw (or was it an axe?) Thanks for sharing, Lady Govan!