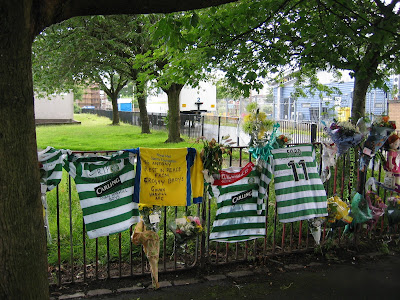 Tributes adorn the railings where poor Anthony fell,
shaded from the strong sun by trees in full leaf. 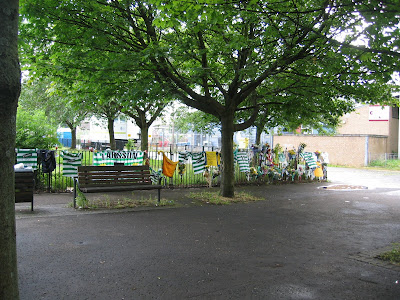 http://212.58.226.17/1/low/scotland/glasgow_and_west/8140977.stm Murder probe after violent attack
A murder inquiry has been launched after a 30-year-old man died following a "violent attack" in Glasgow.
It is believed four men, armed with a variety of weapons, were involved in the attack on Anthony Ford, of Rosneath Street, Govan.
The incident happened at about 2030 BST on Tuesday, 7th July in Harhill Street, near Langlands Road in Govan. Mr Ford later died in the Southern General Hospital.
Police said the attackers were thought to be in their mid to late teens.
Det Insp Paul Livingstone said: "Although a post-mortem examination has still to be carried out, we will be treating his death as murder and an inquiry is under way.
"Anthony Ford was the victim of what would appear to have been a sustained and particularly violent attack and we need to trace those responsible."
He called on anyone with information which could help the inquiry to come forward.
Posted by Nihil Sine Labore at 23:15

I was born in a single end in Rosneath Street. Found your blog trying to find a street view map. Like it. x