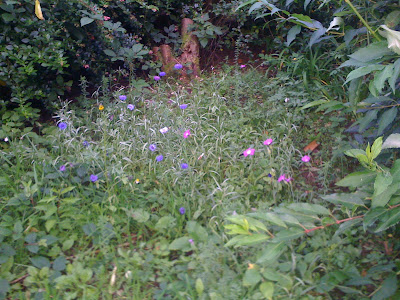 Around this time one year ago, I wrote of the 'dear green place' that had sprung up off Water Row.

"We are on the cusp of autumn, but today is decidedly summer" I wrote, waxing lyrical. "This grassy field is surrounded by trees and hedgerows, still in full leafy bloom. The grass grows long and wild and I walk round the perimeter, enjoying the warmth of the sun beating down on me".
Today is a day pretty much like the one I described back then, but now, the dear green is going, ploughed up by a digger, rubble piled high and ground scraped right down through a few generations of dirt.
It used to have Jack's Bakery, it used to have a close, it used to have a post sorting office, it used to have trams running over it, it used to have a shipyard, it used to have wee cottages and inns. The dear green place - which was only that for a season - now enters its next incarnation. 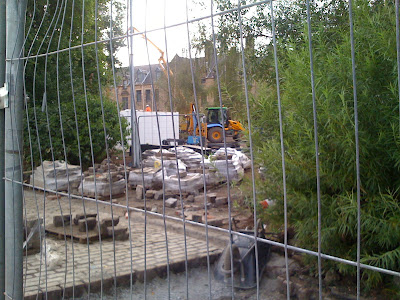 Glad they're keeping the cobblestones safe. 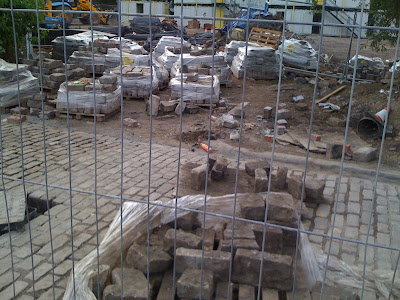 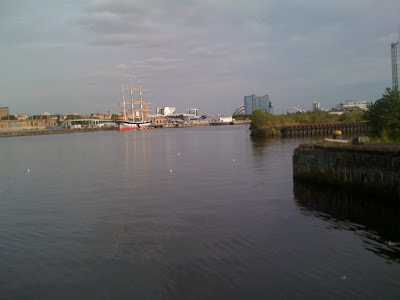 And so we bask in a glorious Indian Summer. 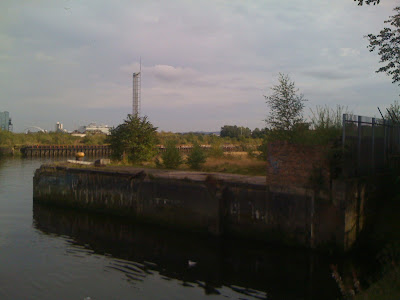 Me and his lordship promenade by the riverside; the early evening sun in the warm cloudy sky is still radiating heat and casting rays that shimmer on the surface of the chocolate coloured Clyde.
We hang over the railings, watching the river roll on by. It's pretty empty, my companion observes, not like the Thames, which has many a boat chugging over it. 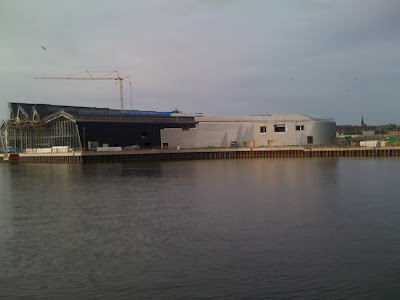 Across on the other bank, the pinnacles of the new Museum of Transport rise high. 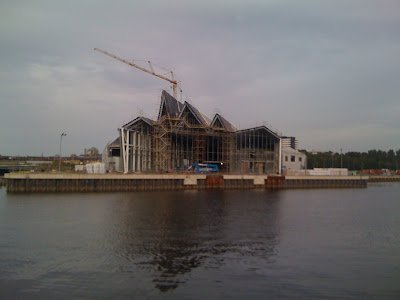 I defend Glasgow's neglect of the watter, telling him, yeah, well, it's gonny get a lot busier when the ferry's back on taking us over to the museum. Just at that, a speedy wee dinghy zooms up towards the city, skiffing the surface. See.
A small group of 'thirty-something' ladies pass us by and take up a spot on the grassy embankment. They are each laden with bottles-a-plenty and once settled begin screwing off lids and popping corks for a late summer soiree.
A big boattlaIrn-Bru explodes with a fizzing, foaming and hissing. The lady puts it firmly on the ground, holding it by the neck and slowly tightening the lid again.
"It's phe - no - men - al. Get - bi - zzzzy with the fi -zzzzy" she gurgles, mixing her drinks advertisements.
We continue our walk, passing through the urban landscape, trees and shrubbery in full leaf, the grass a vibrant green, the white pebbledash houses and flats sitting prettily inbetween. Got to be the best spot in the whole of Glasgow to live.
At the party, a couple of the ladies are really getting down to business mixing cocktails. An African girl, tangly hair highlighted with silver, introduces the rest to a new and exotic recipe, as she pours liquids from one bottle to another and shakes them vigorously.
All are lively, laughing and joking, except one, who is sitting on the wall applying a roll-on deodorant under her oxters.
"Aye, ye've jist got t' deal wi' it when ye get t' ma age" she says resignedly to her pal who nods absently, awaiting her turn to slug from the bottle.
Posted by Nihil Sine Labore at 22:23 No comments:

A Glow In the Gloom

Another wet day in a long, long line of wet, wet days. Rainy August flowed into torrential September and yesterday was so bad that the Rest and Be Thankful slipped down its own mountainside and there's a 60 mile diversion if you want to go to Islay. My hair is pure frizz. You can go out for a walk with a cagoule on and a brolly, but you can forget sitting down anywhere - and don't even entertain the idea of a picnic. This much rain can make you dead miserable, and that's saying something for me who usually quite likes dismal weather.

A big fella cuts out of the Job Centre in front of me and walks briskly down Govan Road. Chasing after him, on unsteady legs, totters a young man, shaky and painfully thin. He follows as fast as he can calling in a high whine, "'Scuse me, mate, 'scuse me. Ur ye wan'in a . . "
The big chap doesn't respond but the skinny lad reaches forward and taps him on the shoulder. Now the other looks round and I see he has earphones in his lugs. He's got a kindly face, a big beardie fellow.
"Would je like a hat?" he asks simply in a quavering voice, holding out a khaki green baseball cap with extra large skip.
The bearded one pulls one of the ear things out and gestures with his palm in a no thanks but thanks for asking movement. He continues along the road, making good headway with his giant strides.

Two workies cross over towards the shops. There's plenty of them in Govan these days with all the stuff getting built. The thin man whirls round to ask them,
"Any yeez want a hat? Keep the rain aff ye?"
They have their eyes on Greggs but one of them looks at him sideways and shakes his head while the other continues talking.

Anyway, hat man is not deterred by the lack of takers and after standing for a moment, swaying on the spot and then leaning back and peering through narrowed eyes, he advances.
Outside Dean's Superstore an elderly man is standing, maybe sheltering from the rain, maybe just waiting for someone, maybe just passing the time at Govan Cross. Suddenly he is seized by our friend, who is now determined that this man should be the recipient of the hat. He holds onto the old man's arm and tries to press the cap into his hand. The older man is smiling widely and saying no, no, ye're alright, and then before you can say splish splash, the cap's been set on the old man's head and whit dae ye know, it's a great fit and "that'll keep the rain aff ye, eh?"

So, now I am waiting for the financial transaction to be negotiated, but hey - this rain's making me cynical. No such thing transpires. Jittery Jim claps his hands on the man's shoulders and nods his head in satisfaction. A good deed done and he swivels round and heads off back to the job centre entrance. The old man grins and laughs with the shopkeeper at his doorway.
Posted by Nihil Sine Labore at 20:30 1 comment: