Tillie Tells a Tale of Evacuation 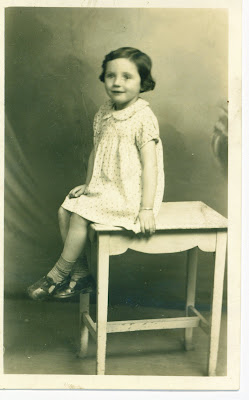 Wee Tillie
"Tell me all about the war and what they fought each other for", is a couplet my granny oft repeated when pestered for a story. So, in the month of November, when we remember our war dead, let's listen in to one of Tillie's interesting tales of wartime in Govan.
I was very young at the start of the war - just three when it began and about nine when it ended, I can remember quite a lot of things though. I lived at 163 Broomloan Rd, and when I was four, myself and John, the wee boy who lived downstairs on the first floor, were going to be evacuated to the country, where we would hopefully be kept safe from the German bombers.
At that point everyone was in a panic, due to the fact that we lived almost on the banks of the Clyde - a prime target for the Germans to bomb due to the war effort in the shipyards of Govan; Harland and Wolff, Fairfields and Stephens.

I was all ready to go with my wee suitcase packed. No time for tears - I didn't have any as I didn't realise that my mother was not going with me.
The buses were waiting at the top of Neptune St to transport us to wherever we had been assigned when, just at the very last minute as my wee label was pinned onto my coat, it all became too real for my mother. She suddenly decided she couldn't go through with it and ran downstairs to her neighbour's house to say she'd changed her mind. There she found Mrs L. in floods of tears, busily trying to disentangle the label from John’s coat.

My mother and my granny then decided to evacuate themselves. I don't know how they went about arranging it, but somehow or other we moved to a place called Barkip in Ayrshire and stayed in a rented cottage there for about six months. Every weekend my daddy and my grandpa who both worked in the shipyard, Harland and Wolff, came down to visit us and would stay until the Sunday night. They would then travel home - I think on the train - to get a good night's sleep before starting back at their work on Monday morning.
I remember Barkip as an idyllic paradise, with lovely scenery and lots of sunshine. It was a bit of a change from the tarmacadam streets, disused wash houses and dirty back courts filled with broken glass where I normally played.

We used to go for picnics to a place everyone called “The Den.” The local people were very friendly to us, “The Evacuees from Glasgow”. A jolly time was had by all, ball games played, delicious picnics eaten, and walks taken through leafy lanes, while all the older folks blethered to their hearts content.
The children of the family we lodged with were Myra and Clifford and they usually accompanied us when we went out and would lead us to favourite places which we would never have discovered otherwise. They were older than me and both extremely kind. When I was tired of walking they used to cross their arms and join hands, making what we called a basket. They'd kneel down so I could sit on the basket and put my arms round each of their necks and then they’d walk along carrying me, the wee lassie, like a queen.
Posted by Nihil Sine Labore at 21:28