Hey, so I'm walking by Boyds the Jewellers on Govan Road and notice the front door shutter is pulled up and the front doorstep lies in its original glory. I remember my recent description of the Govan Printing Works front step which is now covered up - and lo and behold, the very same step is here! Quick fish in the bag for the camera. Snap! 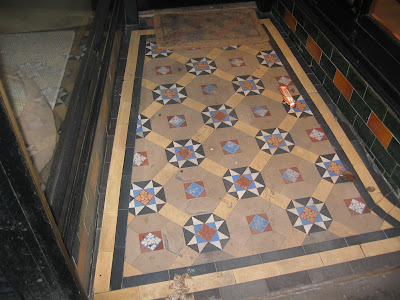 Work is underway outside the shops at Govan Cross. The big planters full of trees and litter out of Greggs are away and tar is being laid.
No matter what they do, it won't be as good as it used to be. Sorry, it just won't be. 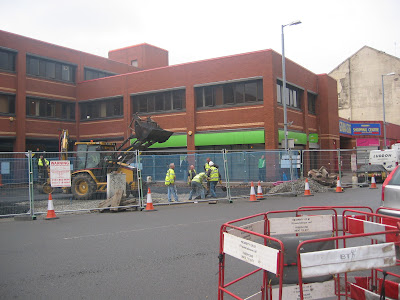 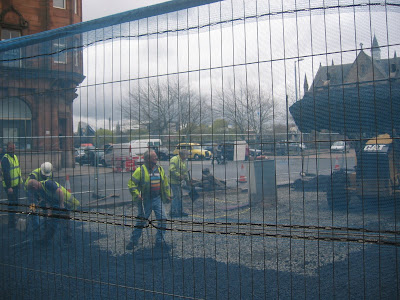 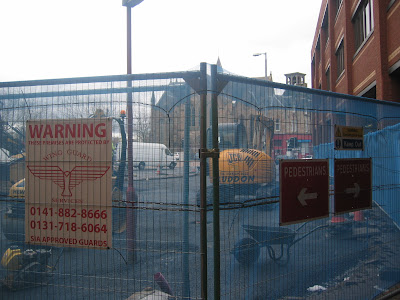 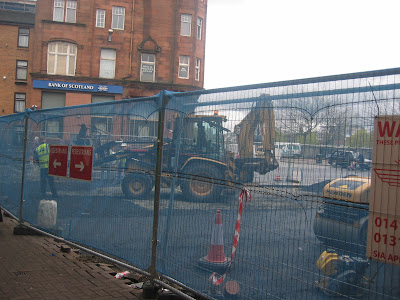 Tillie Tells A Tale of The Doctors

The first doctor I ever met was Dr. Norman S. Dykes who delivered me in my home, as was the custom in Govan of the 1930s. Some women didn’t even have a doctor in attendance at the birth and would have a midwife to deliver their child. Others had an unqualified woman, one who was well known in the neighbourhood as an expert at delivering babies.
It was all a matter of money. I was born in the days before the National Health Service. If we needed the doctor to visit us at home, there was a fee to pay. As you can imagine, people who lived in Govan were not as a rule wealthy, so most of us dragged ourselves off to the doctor’s surgery no matter how sick we were. We also had to pay to see a doctor in his surgery, but that was less expensive than a home visit. Many patients were only seen by the doctor when the circumstances became extremely urgent and it was a well known fact that the doctors took their work very seriously and would perform their services whether they received payment or not.
I can’t remember seeing Dr. Dykes too often during my childhood. We didn’t go to the surgery as often as people do nowadays. Instead,the chemist shop was visited by all and sundry, seeking advice for minor and sometimes major illnesses.

The Waiting Room at the Surgery had small wooden chairs to sit on. There was no receptionist and as a person came in, they would ask, “Who’s last?” Then they’d know their place in the queue.
The people of Govan were kind and would often let someone who was noticeably sick or a child go first.

Dr Dykes had been my mother’s doctor since she was a wee girl. She told me that she’d loved him since she first saw him when she was about ten years old and was walking with her pal Katy down the stairs of their tenement building. Suddenly, a very handsome young man ran upstairs, smiling at them as he passed by. They looked questioningly at each other, wondering who this dashing stranger could be. He was well groomed and dressed as though he was going to church. Then Katy realised this might be the new young doctor. Her mother had sent for a home visit because her sister had measles. And of course, it was.
Dr Dykes became a revered and trusted friend in my mother's household until his retirement and his wise advice is still quoted to this day.
Posted by Nihil Sine Labore at 10:31 2 comments: 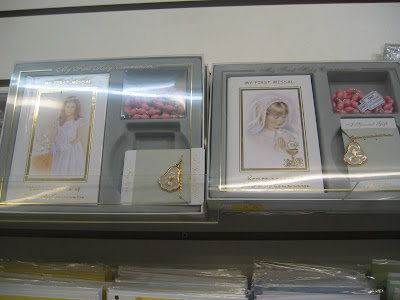 As the year rolls round, the card shop at 851 Govan Road marks a very important milestone in a Catholic child's life; First Holy Communion. You may buy cards or little sets with a missal, rosary beads and either a locket of a saint or a rosette of some kind, for girls and boys. 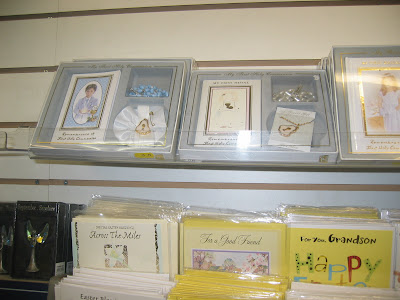 When I was wee, the First Sunday in May was an occasion for Catholic children to wear a new outfit - though I only remember girls talking about it. They'd get a new dress, hat, a bag, snowy white ankle socks, patent shoes. There was a lot of excitement and pride associated with it. Those who attended the kirk joined in a bit but lacked the fervour.

I'm not sure if the First Sunday in May is an official church festival, but I'll wear my new belt in commemoration of it anyway.

Posted by Nihil Sine Labore at 07:35 No comments: