The Funeral of Jimmy Reid 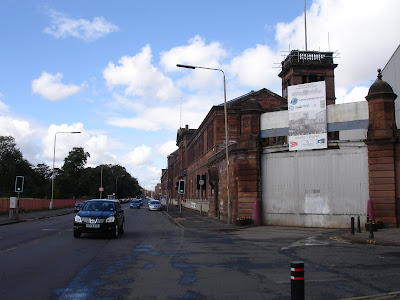 Our roving reporter, Dan, is on the spot for today's celebration of the life of Jimmy Reid, Shipyard Worker and Trade Union Official who was one of the leaders of the famous "work-in" at the UCS Shipyards in 1971.

Well, it wouldn’t be Govan – and I don’t suppose it would have been Jimmy Reid either - if we didn’t have a bit of ‘Govanitis’ controversy. Yes, even on the day of someone’s funeral.
As the cortege passed along Govan Road, there, on the busy pavements, outside the Old Govan Arms, Jimmy Reid was being given his blessings from one irate ‘punter’ shouting at the cortege, accusing the dead man of deserting his ‘class or class-less’ roots, when he defected from the shipyards and became a political pundit for The Sun newspaper and the old Glasgow Herald.

Ah well, you can’t please everyone -- and the contrast, I’m sure, would have been evident to Jimmy, lying there in his coffin as he made the journey from his home in Rothesay, on the ferry across the Clyde, up the road alongside the Clyde estuary, and thence to Fairfields’ (now Upper Clyde Shipbuilders), where around one hundred shipyard workers, yellow helmets in hand, bowed as the cortege passed the yard door.
Of course, most of the workers were not around at the time of the ‘sit-in’ which had taken place almost forty years before – but the legend lives on. 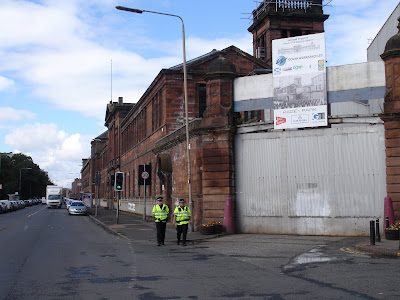 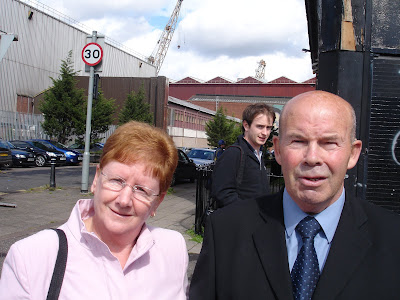 I did meet one man who was there, retired former Fairfields’ man, John Cassells who had come along with his wife, to pay their respects, as did many others who had nothing to do with the shipyards – but were unstinting in their praise of ‘the Committee’ who had organised the ‘work-in’. 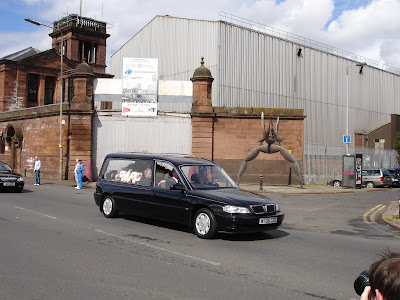 The praise was also, very much in evidence at a ‘Celebration of Life’ for Jimmy Reid, held in Govan Old Parish Church.
The place was packed out and the speakers included many famous friends, such as fellow-Govanite Alex Ferguson (Sir, mind you – and Manchester United manager), Alex Salmond (Rt. Hon. don’t forget – Scotland’s First Minister, and proper ‘punter’), some prominent Trade Union people and Billy Connolly (I don’t think he is Sir yet, although he is a neighbour and good friend of The Queen, up there at Balmoral).
Billy seemed sad that he could not claim to have been Govan-born, but had been educated at St. Gerard’s School, in Southcroft Street, Govan.
The Service (or Celebration) lasted for one and a half hours, with loads of laughs, emotion and mighty tributes, re the way that Jimmy Reid had lifted himself, from the Whitefield Road days of his birth and youth, to become a raconteur, after-dinner speaker and writer – much of his learning self-taught, from countless hours spent in the Elderpark Library in Govan from age fourteen. Jimmy is survived by wife, Joan, three daughters and grandchildren.
David Scott, a former Television presenter, and long-time friend of Jimmy’s conducted the Proceedings and recalled how Jimmy had told him of an incident from his shipyard days – when one of the workers had dreamt-up a ‘scheme’ (or scam), whereby he would take a load of grease up to the greyhound racetrack (‘the dugs’) and grease the floor of four of the five traps – leaving trap number three, allowing a ‘safe –passage’ out of the traps for dog three.
Of course, all of the workers were told of the idea and there was an unusual amount of bets on number three dog in that particular race.
Number three dog won, and Jimmy said that the only things faster than dog three that night were the punters going to collect their winnings from the Bookies before they held a Stewards’ Enquiry.
We know that this story will be told again, as will other countless stories, fact and fiction – about Jimmy Reid and his accomplishments. I’m glad I was able to attend his funeral, the feelings of respect and some distant admiration I had felt beforehand -- for what he achieved were endorsed by those who had known him, up close. 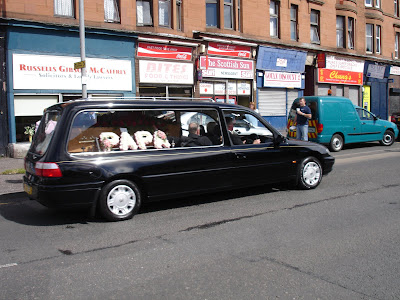 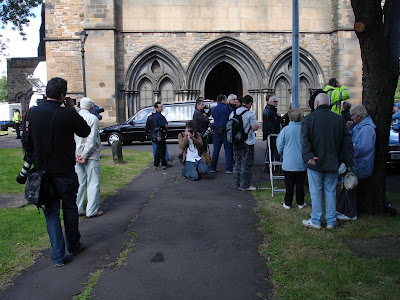 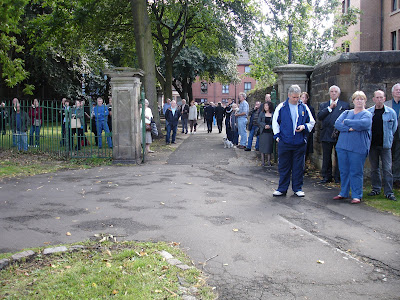 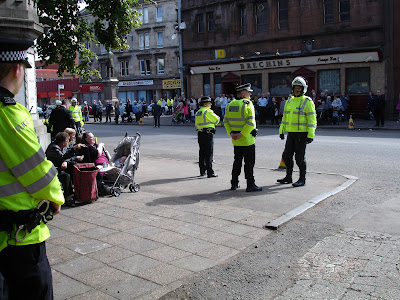