Spirits On The Streets 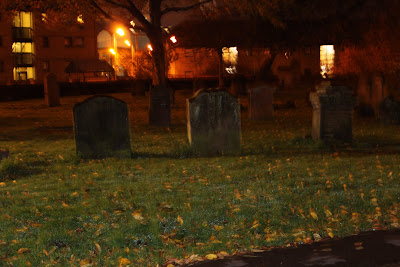 Ghaists 'n' bogles are fleein' aboot the auld haunted graveyerd o' Govan Auld the nicht.
Hallowe'en's become sooooo commercialised - here we put some of the real meaning back into the evening when spirits roam freely through the world. 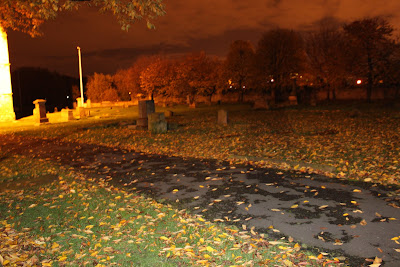 Clocks went back an hour last night, so this Hallowe'en sees darkness fall around half past five.
On Govan Road, I see the first pair of guisers of the evening. A couple of 12 year old boys. One is a white boy sitting in a wee nhs wheelchair. On his head is a bald cap with straggly wisps of hair round it. He's being pushed by a black boy who's got a baldy wig on too with a big mohican jagging out the top. They cross over Shaw Street and the wheelchair batters into the kerb, knocking the wee baldy flying. Smokers at the side door of the Harmony squawk and shriek, "In the name a the wee man! Look it ye's!". 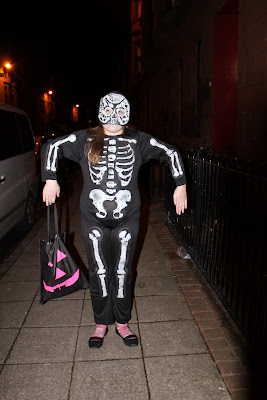 After dinner we go for a saunter through the festive streets. Half sixish sees plenty of guisers heading round the doors. Skeletons on Shaw St, fairies, witches floating down McKechnie St. A couple of St. Trinian's lassies zip up and down arm in arm. We catch sight of the baldies once more, the black one still charging along with the white one rattling about in the red metal wheelchair.

Outside the Liquor Barn a skinny scallywag squares up to us. "Gonnae take ma pic-cher?" he whines, out his contorted face on various stuffs. 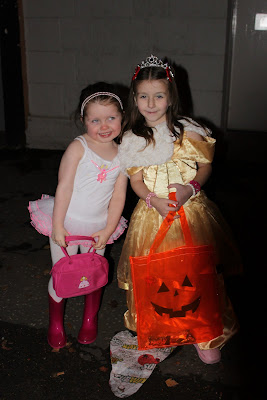 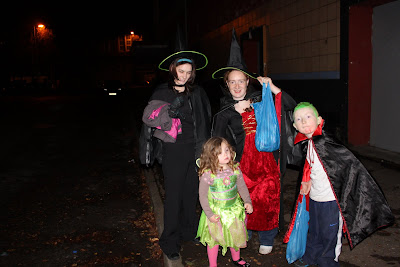 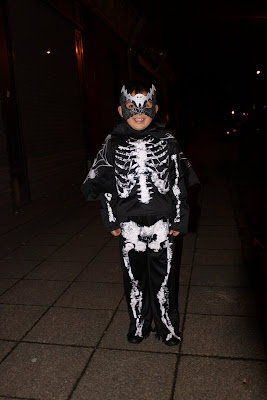 Back home, the basin of cold water's set in the middle of the living room and dooking for apples begins. Performance of a joke, a song or a dance is required before you get one of Watson's fancy cakes and a handful of monkey nuts.

Posted by Nihil Sine Labore at 23:12 No comments:

Email ThisBlogThis!Share to TwitterShare to FacebookShare to Pinterest
Labels: hallowe'en 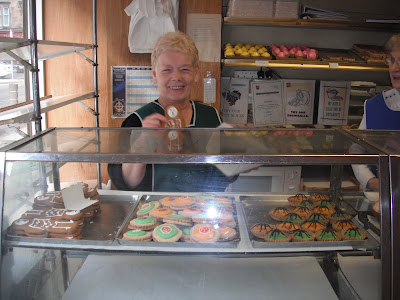 Midday on the Saturday before Hallowe'en, a mad dash to Watsons proves just too late to purchase a big Hallowe'en cake, but still plenty of scary wee cakes, evil empire biscuits and skeleton gingerbread men ready for the guisers. 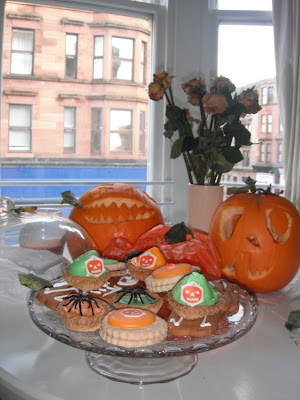 A bit of football and filosofy from guest blogger, benk, who gives an account of the recent Scotland v Spain game in his own "Broonsian" vernacular.
ye ken whits braw? hindsight. it means that ye can look back in yer minds bead and say whit shoulda been efter it wiznae. it wiz aye like that the other nicht when the spanish invaded. the tertin ermae hud flooded the rePUBlics o czechs on a friday, turned up wi a 4-6-0, nae strikers, and got walloped 1-0. so on the tuesday when the spanish came, we wurnae expectin.
the match wiz a sell-oot and we hud wursels ten tickets. ya dancer. wan mare n we coulda hae'd wur ane team. wee boabjim poached thum and we got aw organised. we'd went afore me an boabjim an whit we noticed wiz that the ticket collecters didnae check yer tickets, so for this ane, he got twa big ains and eicht weans (what do the turkish call their weans? kebabees). that wiz fine whener it wiz twa big ains and eicht weans, awmist, but when aw the wee ains dropped oot and wur replaced wi real big ains, it wiz a worry on the heid. shouldnae o been mind, abidie got in nae bovs. the ticket collecters didnae check.
the crood wiz booncin. flooer o scotland wiz loud as. the first half chancez wir pritty even till david villa shot, stephen whittaker haunbawed, and david villa popped in the penalty. wan nil tae the spanish at hauf time. ten minutes intae the second hauf, andres iniesta made it twa nil, and that we thought wiz that. ootta nowhar, charlie adam pass, kenny miller cross, stevie naismith heider, twa-wan. comebacks on. a few mair minutes, darren fletcher and jim morrison wan-two, cross, pique, own goal, twa-twa. whit it a team. the supporters went wild. it wiz scotland mind, an it wisnae tae be. steve mcmanus did whit steve mcmanus does and the big spanish boi popped it in fir three-twa. we wurnae expectin, and we niver got. it wiz awmist nearies.
getting back tae the govan efter a tidy wee short-cut from a taxi man we parked up. in ma beads a spotted twa o twa o the locals haein a chat, nae doubts aboot the nichts match. we got oot the ker in wur scotland tops, and heided towards wur flat. the locals haid fenished their chat. the baldy ain sez tae iz, 'you at the match?' i says 'aye, it wiz grait, awmist'. he says, 'naw it was rubbish, just like friday.' a turn o events i wisnae expectin. 'i says, naw, they wur guid. they wur unlucky. if they'd played like that on friday they wooda won', usin the benefit o hindsight fae ma minds bead. 'aye eh suppose.' he says, 'eh only seen the last twenty meenits. eh diny hauv that sky, eh wiz listening tae the radio while eh was paintin.' 'awrite' i says. 'its no the same is it?' 'naw' he says, 'see ya later', and we went wur ane ways, usin wur minds bead and constucting wur ane realities oota wur hindsights.
Posted by Nihil Sine Labore at 09:20 4 comments:

You Can't Go Wrong With A Scone

In Watson's this morning, I buy half a dozen freshly baked rolls and then ask for two fruit scones and two plain.
"You get six for a pound," says the lady serving me.
"Give me six then - two Paris as well."
"Ye can't go wrong wi a scone," she says, and I nod in agreement. "They'll aye keep to the next day."

I savour the moment; the homeliness of the bakery, the aroma, the wee signs still stuck on the glass counter, though scraping off a bit, the same floor, the same ceiling, the same fittings since ever I remember. And, the friendliness and warmth that makes Govan great.

I go out into the world, full of nostalgia and resolving to show that same couthiness to the next person I meet.
Posted by Nihil Sine Labore at 19:52 No comments:

It's misty and grey all the livelong day. It's the kind of weather that makes you think of the nights fair drawing in, so when I get on the subway at Buchanan Street and alight at Govan Cross, I am fully prepared to ascend from the bowels of the earth (like the Chilean miners today) into the darkness of a Scottish autumn night. But it's only half five and daylight still reigneth, with a soft brightness.


I reckon that plaza thing in front of the shopping centre is complete now. It's a bit of a let down if I'm honest - ok, better than the giant manky planters full of pigeons and papers, but nothing to ooh and aah over. Just a snaking stainless steel bench; dead uncomfortable, cold, no back on it to rest against. The paving slabs are nice stone though.


Two wee boys are having fun jumping over the bench. They are small, maybe 7 or 8 but they can take a running jump and easily clear the bench, and they race back and forward, bouncing over it before disappearing into Farmfoods, which is where I'm heading myself.


One of them has scaled a refrigerator unit and is gripping on to a ledge at the front door.
His harassed ma shouts, "Git doon you," and then, "Thiv no got yer Jamaican stuff."
An old man with a droopy Western outlaw moustache calls out, "Naw, ther's nane a the gingerbreid in. That's whit Ah'm efter an'a'."


I get a coupla loaves, Hovis, two for a pound and go to the checkout. The wee boys are loading bananas, bread and a big boattla irnbru onto the conveyor belt. The checkout guy takes the ma's money and hands out seven pounds something in change. The wee boy's hand darts forward and snatches the fiver and the coins.
"Riiiiggghhht," growls his ma and he reluctantly holds his hand out for her to lift the cash.

The checkout guy and me have a wee laugh and the ma shakes her head and tightens her mouth. We're only half way through the October holiday week.
The wee boys are off like streaks of lightning, running pell mell along the silver seating.
Posted by Nihil Sine Labore at 19:48 No comments: 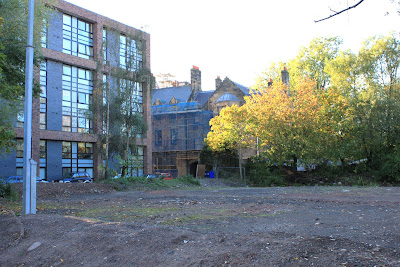 Who's getting to live in the new flats on Pearce Lane? Pensioners? Refugees? Unmarried mums? Lucky beggars whoever they are. 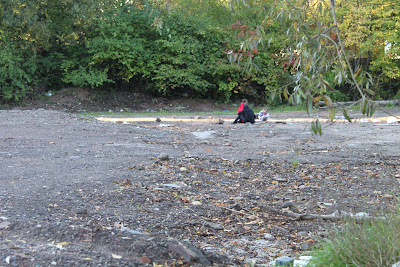 I come upon a sweet little scene in Govan's wilderness, in the shadow of the People's Cathedral.
Children playing in the earth, safe in this sanctuary, surrounded by trees arrayed in autumn foliage and warmed by the last rays of a dying sun. 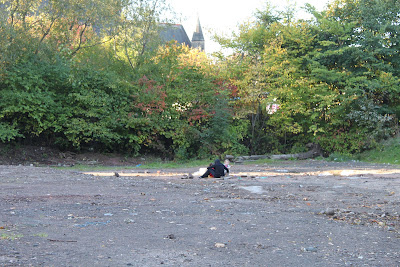 Views Along The Busy River Clyde

Got a loan of a camera and as the weather is fine I take some photos along the riverbank. 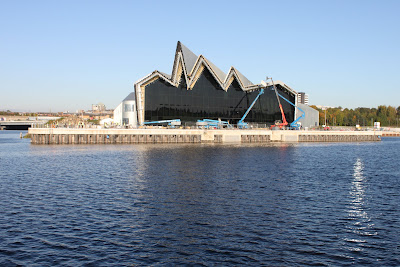 The new Museum of Transport under construction. 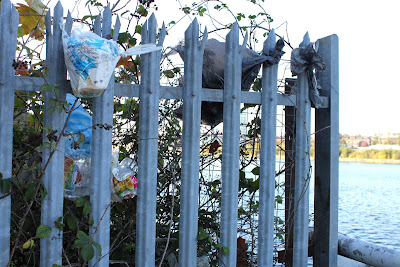 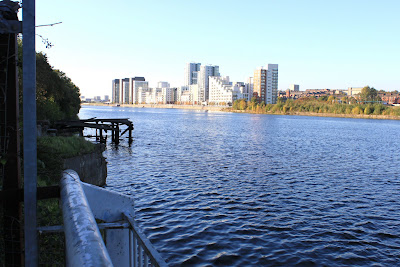 Fancy flats on the north bank. Spare us. 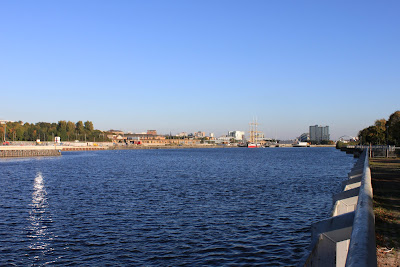 Up river to dear old Glesga toon. Check the sun shining on the rippling current.

Posted by Nihil Sine Labore at 23:12 No comments: 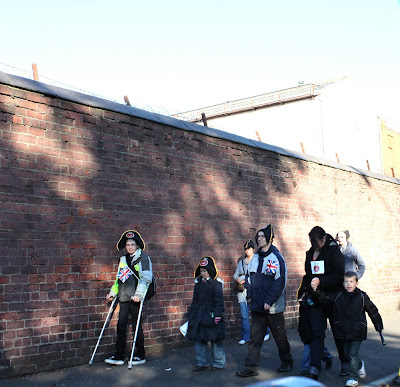 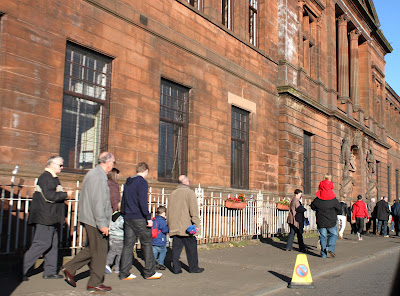 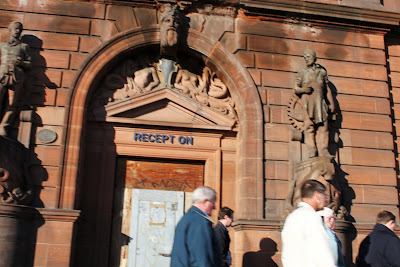 Govan is so busy today. Crowds are wandering along the Govan Road on their way home from the last traditional launch of a ship into the River Clyde.
HMS Duncan

Everyone seems a bit despondent. Some people are wearing pirate hats but there's no high jinks. Just crowds slowly making their way to the bus stops and the subway, or back to where they've left their cars. Just a bit fed up, in spite of the balloons and the fireworks, in spite of the big splash and the magnificent sight of the ship, in spite of the sun splitting the blue, blue skies.
Posted by Nihil Sine Labore at 22:42 1 comment: