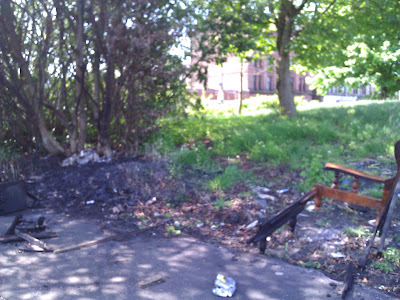 The home that had everything is no more. A grim lesson to be learned by all who are wont to smoke in bed. 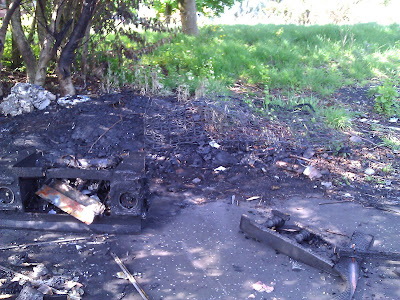 Posted by Nihil Sine Labore at 22:15 No comments: 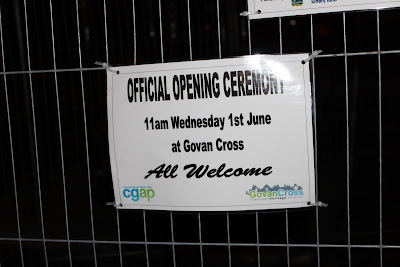 Gets off the subway late at night and in the street it feels dead strange, like you're actually inside a house, although you're not. Maybe partly due to the weather being so mild? Not sure. Maybe because lots of here's been knocked down and the wee bits that are left feel cosy and familiar? Don't know.

So, crosses the road to have a squek at the beautifully refurbished fountain, complete with Govan Baby. After the disappointment of the stainless steel benches, this is a beauty. Can't complain. Can't wait for the celebration. 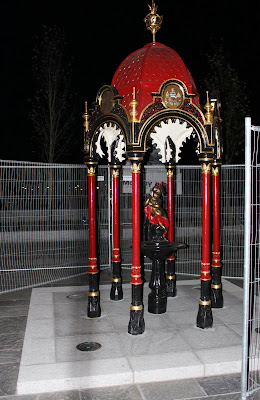 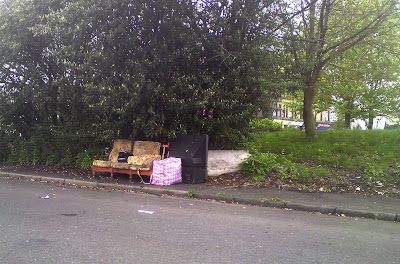 Click on the pic to make it big and you will be as mesmerised as I.
All one's earthly goods neatly packed in a pink checkered shopper. A two seater settee, a double mattress at the back, plus a big screen tv on this leafy residential street make for a prime location . . . only in the fabulous weather we're enjoying at the moment, mind.
Posted by Nihil Sine Labore at 00:02 1 comment:

Watching The World Go By

Hingin' oot the windae has been a favoured pastime of many Govanites over the years. On this tranquil evening, there's me and an elderly woman across and one storey up, surveying the street - not forgetting the eye at the top of the pole.

The sky above is a deep warm grey and the blustery wind and squally showers of daytime have died away to a still evening. The neighbourhood's busy tonight. Govan's streets are busy with people of all ages busy busying themselves with the business in hand.

Three wee boys aged about 5 or 6 walk along the middle of the street, as fast as their wee legs can carry them. One of them's got a big stick which is knocking awkwardly on the ground. Three wee men on a mission, one directing the others round the corner and out of sight.

At a close mooth two men and two women tumble down the steps and stand for the next half hour chatting. One of the girls is bent double laughing and one of the guys performs a comic dance at the edge of the pavement. They all laugh after that and go on with the chat.

Six boys in their early teens swagger down Shaw Street. They range in height from five foot nuthin to a big six footer. As usual they are kicking something about between them all. This time it's a paper cup, squashed flat. They pass it and when it gets stuck in the gutter, one boy tackles another and scoops the smashed cup up onto the main surface of the road again. They stop for a wee bit of a kick about on the Govan Road and then pass on down Rathlin Street.

A couple pass, hauling suitcases behind them. Hers is bigger than his.

Trundling along in his electric wheelchair goes our elderly pal to the pub, a tartan travelling rug lies across where his legs should be.

A girl in her late-teens stops the traffic on Govan Road as she attempts to cross in front of cars. Her hair is bleached and her makeup is orange with highly coloured rouge on her sharp cheekbones. White jeans and a sparkly top ensures she's seen by the motorists who stop as she flounders in the middle of the road, her eye-lids half shut and slowly opening. She halts for a moment, swaying a little before catching her balance and lunging to the pavement.

Two boys on bikes cycle round the corner and stop on Govan Road. One holds the other's bike till he goes in for chips.

The dull sky seems to lighten to a pearlescent grey and a sheen of blue appears behind the cloud. A last lift before night begins to fall.

A wee boy, aged about 4 - no older than 4 - is cycling up the middle of the road on a bike with rickety wee stabilisers. Up to the Govan Road he goes and then stops and manoeuvres the bike around and cycles back down. On his next trip up he sees an African man with his little boy. The African boy waves and the wee cyclist waves back. It's getting dark now, but nobody's calling the wee man in, so he travels on.

The gang of six have circled the block and returned to the big metal shutter at the corner of Shaw Street. One of them has acquired a large black gent's brolly on the way and is holding it aloft. They stand lined up along the shutter and bang, bang, bang against it for a while, hard as they can.

Light is fading from the sky, the blue is deepening to cobalt. Three girls come out the chippy and stand outside the pub. That brings the boys over and a carry-on ensues with a lot of shrieking and shoving.

Forty-five minutes of life lived and loved in the haven of Govan's streets.
Posted by Nihil Sine Labore at 22:12 1 comment: