What a wild,windy day today, with gale force winds of up to 70mph! Games of football, which go on all summer long, have to be abandoned - unless you can find somewhere sheltered to play.
Welcome to guest Blogger Dan with an account of his own highly competitive games in the safe haven of Govan's tenements.

It’s probably around 55 years since I last played ‘wee heidies’ in our back court (goodness, that sounds posh – we just called it ‘roon the back’).

Anyway, as an adult, before the building at 571 Govan Road and the whole of Burndyke Street was demolished, I re-visited the scene of hundreds of closely fought (and fought is definitely the right word) encounters – mainly between me and my older brother, Duncan.
On other occasions these contests would include boys who lived locally or school pals who came by after school. I call them contests because we usually nominated the team that we were representing, which of course, would be the favourite team we supported.

The game of ‘wee heidies’ was very simple. We had goalposts and a crossbar painted on two walls facing each other, the space being the width of the backcourt, in this case about 6 yards. Each player took turns of tossing the ball up above their head and making towards the opponent’s goal and trying to get it past him to score.

Going through the close into the backcourt as an adult, I had to bend my head for fear of knocking it against the ceiling just as you entered the back. That was the first surprise. I could remember having to jump up and touch the back close ceiling.
Next, I couldn’t believe how small the back was – the phrase, ‘no room to swing a cat’ was completely apt and had me wondering if I had come to the right address! Everything looked so different to what I had remembered.

One of the main things recalled from my ‘wee heidie’ days was the fact that one of the goals was adjacent to the midden. Up our close - a three storey building with four houses on each landing - there would probably be more than 50 people living. The midden also had to serve the pub, a dairy and a tobacconist on each side of the close, so you can imagine that it got very full of rubbish before the weekly emptying. The main, and messiest, rubbish would be the cinders of ash that each of the houses would empty in daily from their coal fires.

My reason for telling you the contents of the midden is that during a game of ‘wee heidies’ the ball would very often be knocked in the yard square hole through which the rubbish was emptied. Of course, whoever knocked the ball in was expected to go into the midden and retrieve it – only to come out covered in white ash dust.

Very often too, there would be a dead cat or dog in there which had been knocked down on the busy Govan Road and thereafter thrown into the didgie.
Certainly not one of the ‘lucky middens’ that were spoken about by the ‘didgie-rakers’. Those lucky middens yielded up treasures that had been thrown away in the more affluent areas, such as the top end of Copeland Road, or Vicarfield or Southcroft Street.

I hasten to point out that I was never into the midden raking. The only time we went into the midden was to get wur ba’ back, and we had to check that oor Mammy was not looking out the windae, which overlooked the Wee Heidie pitch.
Posted by Nihil Sine Labore at 18:47 2 comments:

At the end of a week in which we've been caught up in the brou-ha-ha of tims and huns not getting on, here's a coupla pictures of a Republican Flute Band processing along Govan Road this Saturday morning. 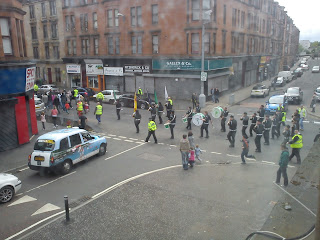 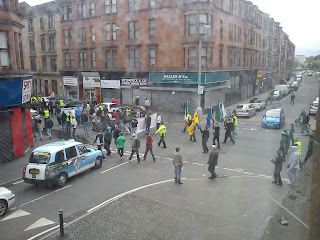 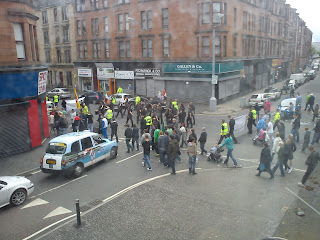 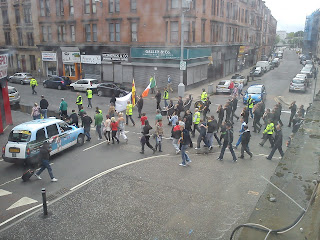 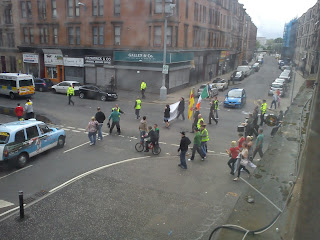 Posted by Nihil Sine Labore at 20:26 No comments:

As is usually the case with bakeries, the best time to visit is the morning when the shelves are stacked with freshly baked goods, some of which have run out if you get there later in the day.

This morning is fine, with a threat of showers, but for now the sun is out and the warmth of spring is in the air.

Watson's Bakery in Shaw Street is well stocked with an impressive display of pies and pastries, cakes and buns. I am going on a journey today so provisions are required for me and my travelling companions and it's so early this morning I am the only one in the shop so far.

"Give's 4 sausage rolls," I say and the shop lady puts them in a white paper bag.
"And a half dozen scones, and can I get 2 coconut icing buns and 2 of the chocolate ones and . . . "

A man strolls in and surveys the counter. After a moment he interrupts.
"Hey, you sell tuna and cheese melt and a chicken baguette?" he asks in a strong eastern European accent.
He's in his late 20s, has a high receding hairline and is wearing a tight fitting sweater and joggies. On his bare feet are flip-flop summer sandals.
I look at him thinking, ha ha, you'll be lucky.

The shop lady stops mid-way putting the icing buns into the bag.
"What is it son?"

He calls in Polish to his companions who are waiting and talking outside on the pavement. A very tall slim girl, whose height is extended further by the high stiletto heels of her over-the-knee black leather boots, is examining a newspaper with another boy and girl. She flicks her long black hair and calls back to him sharply.

"You do tuna melt, huh?" he asks in a surly sort of way.
"Naw son, nothin like that in here," says the shop lady, putting my bags together on the glass counter.

He strolls out and she calls after him, "Maybe try the wee dairy round the corner."
Posted by Nihil Sine Labore at 18:37 4 comments: 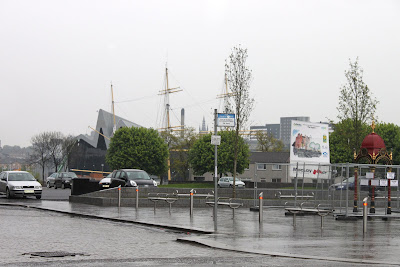 After days of sunny weather, we awaken to grey skies and rain, but are cheered by the news that the Tall Ship is moving down river.
In the evening, we get off the subway and emerge into the light. We walk with mounting excitement in anticipation of the sight which will greet us as we pass Govan New.
Yeeeeessss. we've got a big ship right in our living room! It's so close and looks really amazing.
Shame for Partick. They haven't got quite the same view. 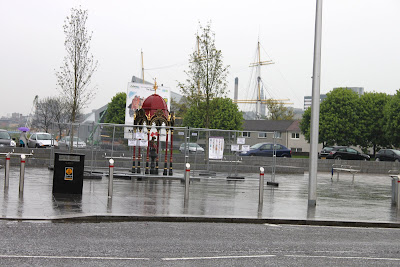