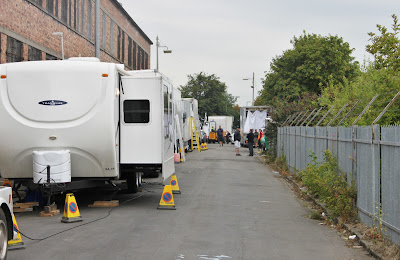 Glasgow is masquerading as Philadelphia this month as Brad Pitt and a Zombie army film a big budget movie, World War Z. The zombie den is in the Big Shed down at Riverside and today, filming has moved from George Square to Clydebrae Street.
On the Govan Road, there's a long line of film unit vans and security men at the top of Stag Street. Queues of luxury cars and mini coaches bring cast and crew into Govan for a day of indoor filming.

At the far end of the street a few ladies from the hairdressers, towels round their wet hair, have walked down to catch-a-glimpse of the stars.

Across the roof of the Big Shed, a man in khaki is tiptoeing gingerly. He dreepies down to the ground, asking if we've seen any big cars driving by.
"I'm Press," he says, brandishing his camera. We cast him a disparaging look. A wee digital snapper hangs round his neck, nothing like the two super long lens cameras the man fae The Sun was carrying earlier.
He continues, "Aye, I've seen right inside the Shed, it's made to look like the Far East. No seen Brad yet," and on further questioning he admits he's the correspondent from Castlemilk's local rag. 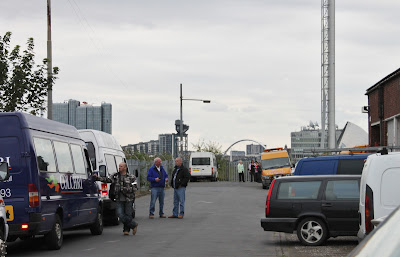 Ladies abandon their hair appointments at Jacquie's on Govan Road, to gaze longingly down towards the glamorous film set of The Big Zombie Shed. 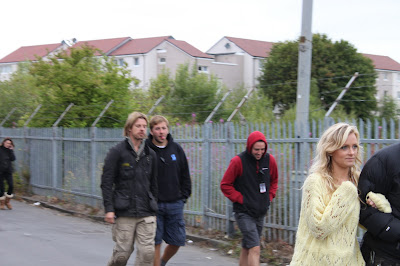 Cast stroll through Govan - yes, it's Brad at the back. 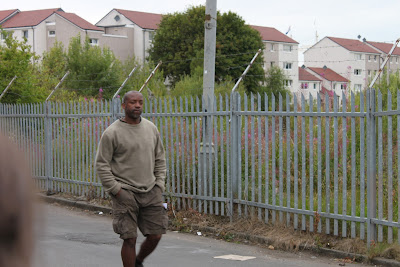 This lad will sort out the zombies 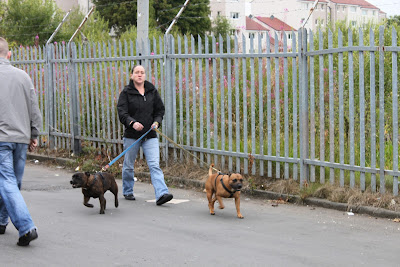 And if he cannae, this wumman wi the dugs will 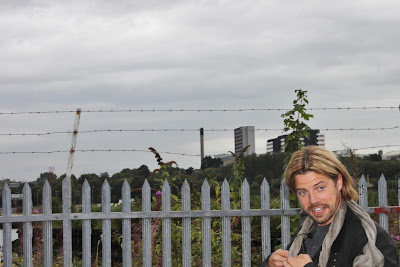 Brad says Hi as he returns from a trip up to Coffee Joe's.
A while later The Sun's photographer appears again, loooong lens slung over his shoulders.
"Watch out for a dark blue beemer. He'll be in it," he tells us.
Aw, right . . . we say in our most blasé tone.
Posted by Nihil Sine Labore at 22:43 1 comment:

Another hot bright day.
"Ah'm very sorry," A man stops me, "very sorry t' get in your way,"
Drunk, I think, but stop for a minute.
"D'ye know about the yairds that used to be here?"
I say, yeah, a wee bit.
"Well, ah'll tell ye . . " and he continues with a tale of working life in the shipyards and what he did and what he didn't do and what was here and what was there.
All the time I'm thinking this could be quite interesting if he wasn't sloshed. But as it is, there's a fair bit of rambling.

While he talks, I can't take my eyes off his, which are the clearest, brightest blue you ever did see with tiny black pinprick pupils.
"Ah'm sorry if ye think ah'm drunk," he says from time to time, "Ah just have to have a wee bit to help me cope. Ye know, ah lost a' ma weans."
And his face screws up with ready tears. He gulps in a deep intake of breath and lets it out in a heavy sigh.
Posted by Nihil Sine Labore at 19:55 2 comments: