Such a warmth in the air this morning. Everyone remarks on it; how mild it is, what a surprise, it's warmer outside than it is in. The first drops of rain start to fall from Govan skies around 5 o'clock and steadily increase to a dreary downpour.

Hallowe'en. What a dismal evening for the guisers.

The primary school children make it home dry at 3 o'clock in their wee costumes; witches, a nurse, a super mario, a skeleton, a vampire. But by 6 o'clock, the streets are pretty quiet with just a few folks running from one close to another with jackets over their disguises.
At home, we light a few candles and coorie doon to listen to some supernatural tales from old Govan.

Tillie tells a tale told to her by her auntie. It was 1936, a dark, cold January night. In the kitchen in Neptune Street, the kettle bubbled on the black range and the gas lamp cast eerie shadows around the room. You daren't cross by the bed recess for fear of what was lurking in the corners.
Tillie's bachelor uncles were amusing themselves and Peter produced a ouija board he'd acquired. He laid alphabet cards in a circle around the table and a card for yes and one for no. The brothers sat at the table asking questions. Their fingertips pressed lightly on top of a glass tumbler which was propelled by an energy, to spell out the answers.
All of the brothers? Well, no, not all, for Edward sat aloof at the window, smoking a cigarette and looking over disapprovingly.
A few simple questions were asked and answered. Edward tutted and shook his head at each one.
A lot of rubbish in his opinion.
"What is the name of the King who just died?" asked Tommy.
The glass began to whizz and spelled out K.I.N.G.  G.E.O.R.G.E. V
"Name the unbeliever in our midst!" cried Peter suddenly and before they could take a breath, the table began to rock back and forward on its legs. The swaying grew more and more chaotic and it began to cross the floor, heading for Edward who had risen to his feet as it clattered crazily towards him, before rearing up on two legs and pinning him against the wall.

On this Hallowe'en, the candles flicker at the window and we look round uneasily and peer into the corners of the living-room.

Now Davy recalls his childhood home, with parents who practised spiritualism. His mother held meetings in their house with visiting mediums and seances in the parlour. Trances and visions were commonplace. At one ouija board session, wee Davy kept tugging at his mother's skirts and interrupting things. L.I.T.T.L.E.  B.O.Y.  A.N.N.O.Y.S spelled out the spirit. He got put into the kitchen out the road for the rest of the night.
Mrs Scobie was a special visitor of some renown. She was an apport medium and used her power to materialise semi precious gems, which she presented to her host. Davy remembers his mother's treasures included opals, garnets, medallions, a set of five sapphires, to which was added on a subsequent visit, a large centrepiece sapphire of glinting blue.
We wonder what happened to the ill-gotten gains. Davy thinks his ne'er do well brother took them.

Outside the rain in still falling in sheets. The candlelight flickers and we have a squabble about who's to put the kettle on until it's decided that two will go together.
Posted by Nihil Sine Labore at 23:40 1 comment: 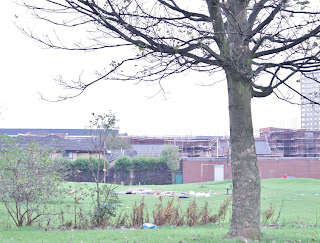 Be prepared. Govan's boy scouts (of sorts) start bonfire wood collections for the big night. After the disappointing lack of bonfires at Guy Fawkes 2010, things are really looking up! Watch this space - which is Burndyke St, behind The Bells. 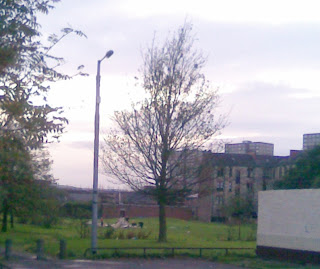 Posted by Nihil Sine Labore at 22:44 No comments: