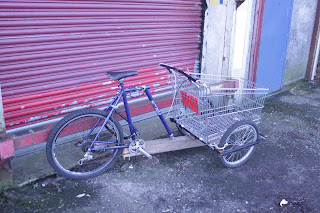 The Winter Solstice has passed and the first signs of new life have been noted after the turn of the year. Children's voices soar up from Govan's back courts and along the riverbank in the lengthening days.
A wee gang of two boys and three girls are running to and fro and stop me as I walk along Clydebrae Street.
"Hiya, where've ye been?" says one.
"Up the town," says I.
"Whit ye gettin'?" and runs away without waiting to hear.
The owner of the trolleycycle has come out of his workshop and is taking questions on Govan's own chitty chitty bang bang. He's speaking in a loud Teutonic kinda accent and the kids are swarming around, one attempting to jump into the basket, another trying to clamber over the handlebars.
A girl and a boy run back over to me and walk alongside. They are nine year olds, with clear, open faces. She has bluey-green eyeshadow stroked patchily on her eyelids and is wearing a pink jersey and pink shorts with woolly black tights under them.
"You've got eyeshadow on," says I.
"Ah no, hee hee," says she.
The boy is wearing a thin quilted jacket and his blue eyes are watering with the cold.
"James, wipe yer nose," she says to him and shivers like she's got the boak.
He looks ashamed and draws the elasticated cuff of his sleeve across his nose and mouth.
"You goat any ginger boattles?" he asks me.
"No, but you're first to get them when I do."
The other children come dashing over, squealing that they're getting a shot on the bike tomorrow.
"Wur gaun ower the squinty bridge!"
And off they go, running and yelling helter-skelter down towards the Riverside.
Posted by Nihil Sine Labore at 21:16

A modern version of the bogey. Looks like good fun!