As I Was Walking Doon The Broomloan Road 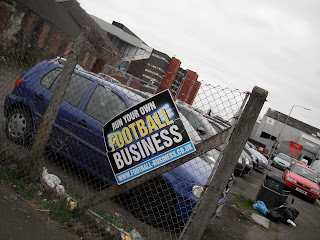 Benk snapped this pic today. In the midst of the disaster that has befallen Rangers Football Club, this higgledy piggledy sign hangs precariously on a fence outside Ibrox, inviting interested parties to embark on a career as a football entrepreneur.

Blogger Dan joins us tonight in black mood. He's ticked, as you will gather.
I'd like to thank Lady Govan for this opportunity to air my thoughts on 'the tragedy' that has befallen me and, at least, half of the City of Glasgow. What a shituation! I apologise for the crude language, a la Sir Sean. I would not, normally, be so coarse, but things are not normal around these parts at the moment, and it seems, so aptly, to describe my mood.

My present remit is not to perform a post-mortem, indeed, I have every faith – knowing 'God is a Prod' – that the 'Blue Knights' or some other Knight in shining armour will come riding to the rescue – hopefully, not another Don Quixote.
I should add at this point that my 'armchair allegiance' has gone, temporarily, to Barcelona FC – it doesn't bother me in the slightest that their players come on to the park making the sign of the cross. I have no prejudices against the 'other half' of Glasgow. As a teenager I wore the Celtic colours when I played in the West of Scotland Juvenile League with St. Constantine's Former Pupils. We won three Trophies and made it to the Final of the Lady Darling Cup, equivalent of the Scottish Cup. I had attended Govan High School but I have good, proud memories of the Connies' team and the boys who played in it.
Back to business, albeit sad business. As well as the sadness, there is anger and frustration that this has been allowed to happen. Forget the James Bond analogy, if it wasn't so tragic, I'd be comparing it to Laurel and Hardy, with Ollie saying to Stanley, 'another fine mess you've got us into!'
For the last 20 odd years, a large photograph of Bill Struth has hung on my study wall. It's a portrait of a fairly stern-faced Mr Struth, Manager of Rangers, 1920-1954. He won 18 League Championships, 10 Scottish Cups, 2 League Cups, 18 Glasgow Cups and 20 Glasgow Charity Cups. I can still remember thinking, as an 8 or 9 year old boy that his policy of a 'wage-cap' for his players, and that his 'strict discipline' was definitely the way to go. Call me 'old-fashioned', and I know that there will be many counter arguments against what I am saying, that we needed to move with the times, player-power, etc. etc., but the pendulum has swung too far. We need people who are dedicated, who are prepared to sacrifice, I mean real sacrifice of time and effort in order to achieve greatness.

Now here's a memory which will surprise the modern reader. As a young boy, I spent spent hours at the main door of Ibrox, on Edmiston Drive, waiting to catch a glimpse of the players. During the summer holidays, we would hang around Copeland Road Subway and wait for the players arriving on public transport for their training sessions.They would walk from there up to the ground and I can still feel the excitement we had on catching sight and following them up the road, finding them 'aye ready' to sign our autograph books.

The emotion of it all has caused me to pen a poem:
What A Shituation
Oh, how I long for the days of youth;
Nae lies then, came oot yir mooth.
No taxing manoeuvres, no one uncouth.
Sure and steadfast in the truth –
A great example was Bill Struth!