Tillie Tells A Tale; The Chippie

Always loved this tale from Tillie about when she used to go for chips every night after refusing to eat her dinner. Dear, dear . . . 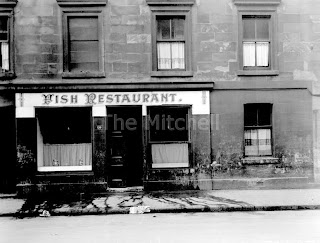 One night as I was standing in the queue, a big tough lassie in front of me said,
"Ha' hen, wull ye keep ma place till a go ootside an pass sumbudy a message?"
I nodded in ready agreement, secretly hoping she would take a long time so that I would get served before she got back.
She did take a long while, but the queue moved slowly in McNaughton's and she didn't take long enough. I had had my eyes glued to the door since she left and suddenly I saw her come running back in when there were only a couple of people left in front of me.
I could feel the anger welling up inside and decided right then that she had lost her place by taking so long to get back. As she came up to slip in before me, I quickly stepped forward and stood very close to the person in front, leaving a space behind me for her to take.

She was a forthright type and turned on me with a vicious glare, clouting me over the ear and shouting at the top of her voice,
"Ya wee besom, ah telt ye tae watch ma place, no steal it."
My ear was ringing and I felt dizzy and shocked by the sudden attack but my mother's instruction on how to handle a bully surged into my mind. "For defence only!" I had been warned.

Grabbing hold of the big toughie's hair and avoiding a rabbit punch to the other ear, I began to scream like a howling dervish. My eyes screwed up - allowing sight only through my lashes - and I started punching her as hard and as fast as I could. Fear gave me the courage to become a non-stop battering ram. Almost instantly, the adults in the queue pulled us apart and separated us. I didn't want to stop as I felt I was having some success. By this time, the big tough girl was crying and I managed to get out of custody and kicked her shins.
Whooosh, next minute we were both being thrown out of the shop. The chief fryer had come round from the counter and taken hold of us by our elbows and propelled us, struggling, out the door.
The two of us ran off into the night, but I stopped and watched as she sped down Queen Street and disappeared into the gloaming. When I felt sure she wasn't going to return, I made my way to my second favourite chippie, Pellini's. Before entering, I peered in at the doorway to make sure she hadn't had the same thought as me. She wasn't in the short queue.

The next day when I came home from school, my mother said, "Don't ask for money for chips anymore."
My heart stopped as I waited for a tirade to rain down upon me.
"I heard there was a bad incident in McNaughton's last night. I don't want you getting hurt in a scuffle."
"Don't worry Mummy, I always go to Pellini's."

Haha...good for you, Tillie ~ your story made me chuckle!

Loved that tale. I could imagine the scene - well done on beating the bully!

so funny! I can not even imagine you!