Fun In The Sun

Whoopee! It's so hot and has been this whole week. People are trying not to get too excited by it and keep saying, "Well, this'll be oor summer," but inside we all feel confident that the sun will shine for the next 8 weeks at least. Funny how good weather boosts our confidence.

A local thug, early 60s but very fit, swaggers out of the bakers with his wee dug at the heels of his open sandals. He wears a vest and baggy shorts, his head is shaven and very smooth, he's lightly tanned after a wee holiday in the Costa. He looks at me and away and looks at me again. I keep looking at him but try to keep a faraway look in my eyes, like I'm not really looking at him. He carries one morning roll in his hand and clicks to the wee dug.

On Water Row, taxis bake in the sun and the drivers chat outside, leaning on the bonnets of the cabs. One sits at his steering wheel, window open and face upturned, eyes closed, catching some rays.

At Govan Cross, the newly paved slabs with metal benches are filled with shoppers and loiterers, relaxing and chattering in the sunshine.

Inside the bargain store with the cutout polis on the window, a few of us are perusing the suncream section.
"Wherr's that stuff that fries ye?" asks one woman.
A member of staff laughs, "Is it this baby oil ye're after?"
Another woman interrupts, "Ye're no suppost to put that on. There's no protection in it."
"Aye, that's it," says the first. "Ah'm goin fur the burn," and she lifts the oil and slips it into her basket.

In the little square of cement behind the iron railings at the front of a Howat Street tenement, a couple arrange a blanket of faded pink on the ground. The sun beams down on them at full force. She is stick thin, black hair in a centre parting and pulled back in a tight pony tail. She's wearing a short polka dot skirt and a black lacy bra and sits on the blanket with her legs straight out and feet on the bars of the rail. She applies oil to her neck and bony shoulders, leisurely lying back as though she might be on the top deck of an ocean liner. He is wearing a perra shorts and no shirt and his body is alabaster white and skin and bones. He squirts open a can of lager and looks around awkwardly for somewhere to sit down.
Posted by Nihil Sine Labore at 23:39 1 comment: 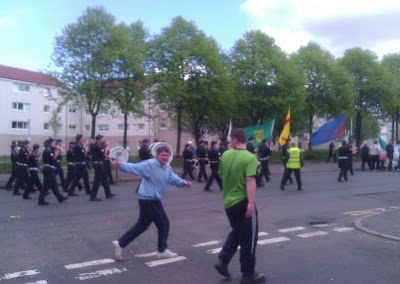 The morning's first holy communicants are barely off to their celebration dinners before a dark drumming reverberates up through our soles and we catch sight of a republican flute band.
It wends its way past Govan Cross before turning right up Broomloan Road, no doubt with a pointed stop at Ibrox Stadium. Ouch.
One of the mothers of today's holy children runs with the march, still in her peerie heels and cream mini dress, her face set in a vicious scowl. ﻿ 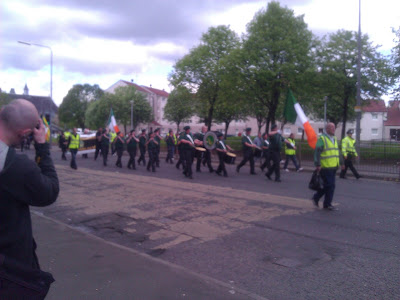 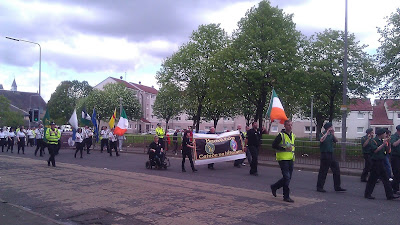 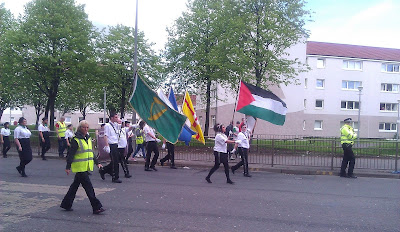 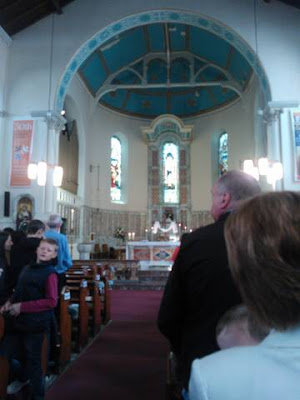 Thanks for the invitation to a First Holy Communion Mass, held on this Saturday morning in May. This is the month - as the priest will later tell us during the service - dedicated to our Blessed Lady (and may we pray that she will watch over us all).
Outside St. Anthony's, Govan Rd, families gather on the pavement. Ladies are in their finery; dresses and coats in whites, creams and pinks. Gents, looking uncomfortable in collars and ties, quietly nod one to another. An African couple approach from Govan Cross. The lady, in robes of burnished gold and a head-turning head-dress, glides along like a ship in full sail.
Cigarettes are extinguished, nipped or stamped on the ground, and the congregation ascends to the charming chapel where me and Wee Raberta snag a seat at the aisle, affording us an excellent view.
Row upon row fills up and families are hailing one another - but in a more subdued manner than they were outside. Pointing and smiling, "Haw, there's Mary n her man. Mary, how's you?" in stage whispers, till the congregation suddenly settles at the holy procession's advance up the side aisle and down the centre to the altar.
All ages are here, from the elderly, well practised in Chapel attendance and all its rituals. to the little children, completely uninitiated and unfamiliar.
"How's he wearin' a dress?" squawks one, as the first of the altar boys marches past in white cassock and perra trenners. 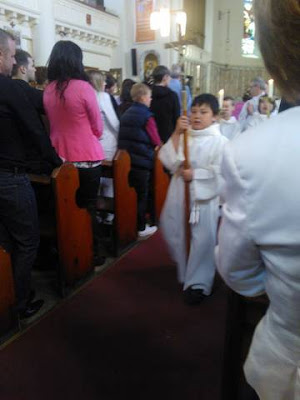 The First Communion Celebrants sit in the front pews, about a dozen boys, kitted out in kilts and three girls in bridal dress. Their primary school teacher, wearing a respectably fashionable outfit of Catherine's of Partick style, keeps her beady eye on them from the pew behind.
The cantor, in full fine voice, sings the entrance hymn and leads us through the mass; Liturgy of the Word, Responsorial Psalm, Gospel Acclamation, Offertory and Liturgy of the Eucharist.
Now children approach the altar for presentation of gifts including bread and wine for the Eucharist, a small gift for Father Dowling and a sample of the work they have completed as part of their preparation to receive the sacraments.
The priest prepares to offer the sacrament and stands on the steps of the altar. A photographer is stationed in position to record each child receiving communion, which doesn't stop the mas and das standing to snap plenty of pics on their phones.
A signal is given for all who would receive communion to arise and approach the altar. A couple, far in on our row, stand and shuffle past us to the aisle. She has raised eyebrows and pursed lips; a disapproving look on her pious face at those of us who remain seated.
The high domed ceiling of azure blue has a few cracked and peeling paint patches. The statues don't seem as large as they seemed when first I visited this Chapel. There's a benevolent spirit of joy here today. 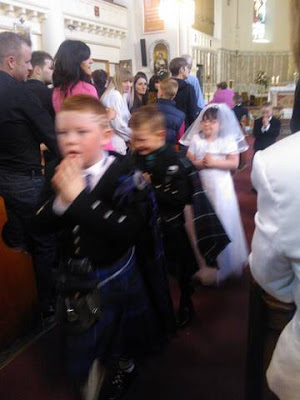 An altar boy holds a weighty tome before the priest who intones a fervent prayer for the faithful, for these little ones who have reached the end of their journey into the holy Catholic church. Baptism begins it. Confirmation confirms it. Holy Eucharist completes it. 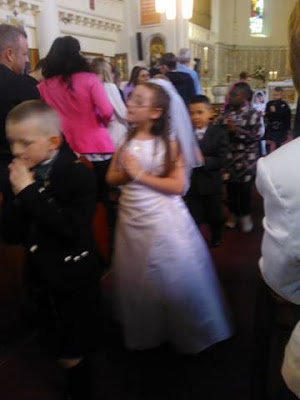 The priestly party depart and the little celebrants follow. The congregation makes its way to the beautiful open door of St. Anthony's, Govan, stopping to dip fingertips in fonts of holy water and descend into the world, renewed by the Communion and its hymn, "Take me Lord, use my life in the way you wish to do; Fill me Lord, touch my heart till it always thinks of you". 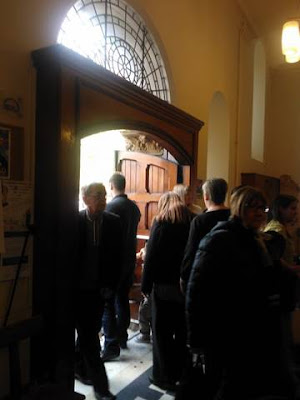 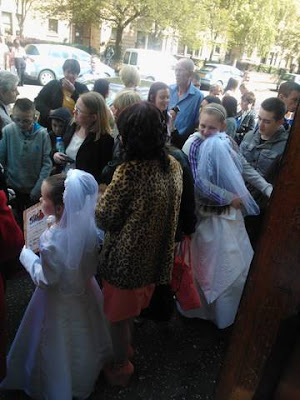 Posted by Nihil Sine Labore at 13:56 No comments:

The bank teller, who looks like the guy off Reporting Scotland has landed them, and we have landed up in a long queue behind them.
Them are a man and woman who are both leaning into the glass partition, breathing on it, wiping it, and she's drooping her head down now and then and casting glances towards a pal who sits on a chair by the door.
He is speaking, in a loud, slow voice with particular attention to enunciation.
"And then when we looks at the cashline it says that there isn't any money. 'N' we knew therr should be money in wir account."
The bank teller purses his lips and looks down, clearly considering what route to start down next. "And, did you attempt to use the card after you discovered the money was missing from the account?" he says, without looking at the couple.
Both in their early 30s, he is unshaven. Both look unwashed with dirty, lank hair. This is noteworthy cos both are wearing brand spanking new tracksuits of navy blue with white stripes running down the legs and arms. Their trainers are snowy white, not a mark on them, thick white laces, clean rubber soles.
"Yes, well," he continues "We went intae Home Bargains efter that and we spent three or four pounds and then, then," he looks at her and she is staring at him with a fierce look of bewilderment. She doesn't seem to realise he's looking for a memory jog from her and just keeps her eyes trained on him.
The teller is tracing his pen lightly over a sheet of paper in front of him and doesn't speak, only glances quickly up and away again.
"We went intae a shop in Cessnock efter that," he says, nodding.
"Aye, we did," she whines, suddenly breaking her silence and looking over to where her pal is standing fidgeting now at the entrance to the bank. "That's right, we did, so we did," she slurs.
The bank teller nods and excuses himself. He will have to go and check a few things, and with that he disappears.
At this, the woman half runs over to her pal and cries out in too loud a voice, "Thir gonnae get the polis."
The pal is a gallus wee madam, dressed in the same haute couture of the tracksuit world, and she just shrugs with a relaxed laugh, "Naw, naw, jist leave it. Jist leave it." And the three of them stand together, united in their own personal banking crisis.
After an age, during which another person reports they have left their card in the cash machine at Asda's, the bank teller returns and just says curtly, "Can I ask you to report this to the Police."
"Whit?" "But can you no . . ?" "Whit?" all three say a couple of times before he says again, "The bank can't do anything. This is a Police matter."
And at that they gather themselves together and wander out, heads down.
Posted by Nihil Sine Labore at 19:00 2 comments: