After my father was killed at Ypres, my mother got a war widows pension. It wasn't a lot of money, but she made the best of it.

At the Glasgow Fair, Mother took the eight of us children down to Dunoon and got a house for 25 shillings for a fortnight. We'd get on the boats (the Clyde steamer) and my mother would buy two tickets - one for herself and one for one child and the rest of us would skip on.

We used to go away picnics everyday. At night walking home we'd go through hedges and pick turnips and potatoes and get the fish from the boats coming in at the pier.
Mother would send us to where they smoked the kippers and we'd get the broken ones. She could make a meal from nothing.

The last week of the holidays we'd go scouring through the shops for jam jars and then pick the raspberries and Mother would make jam and we'd have 30 or 40 pounds of jam to take home. Sugar was only about a penny a pound. The railway would deliver your hampers home for a shilling.
Posted by Nihil Sine Labore at 08:55 1 comment: Links to this post 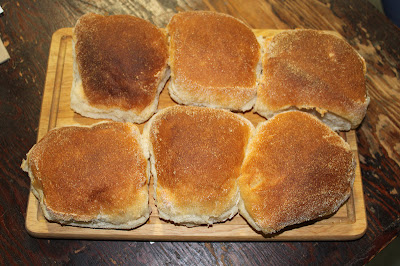 What would your last meal on earth be? If you have simple and honest tastes, and cumfaegovan, then chances are it would include one of these renowned rolls.
Govanites still drool over such rolls; crisp outer shell and a soft, white fluffy inside - a perfect combination of textures and tastes.
Even though the famed Jack's Rolls has passed into legend, I'm glad to report these rolls are still widely available.
Add a generous spread of the best butter, salted or unsalted as you prefer, and sink your teeth into this west of Scotland speciality, tearing the soft bread and savouring the chewy consistency and warm smell of wholesome baked goodness! 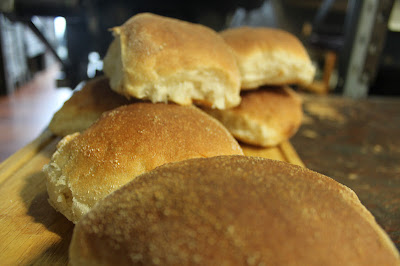 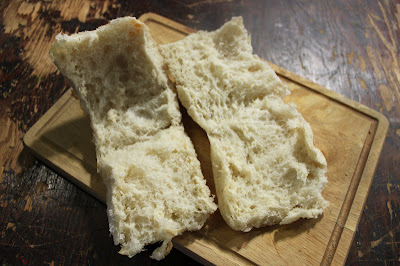 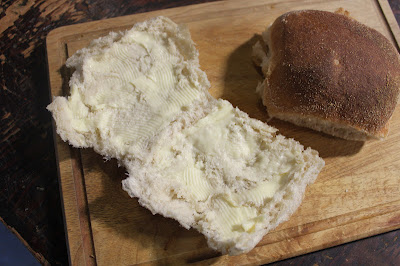 Posted by Nihil Sine Labore at 12:01 2 comments: Links to this post

Govan's backcourts, which once resounded with noise of children's play and women's chat, now lie still for the most part. From the back bedroom, you gaze across the enclosed expanse of paving stones, middens, occasional planters with blooming flowers, ground down dirt. glittering shards of broken glass, and washing lines, from which only the toughest will peg their trackies.
Darkness deepens and moonlight is obscured by this summer's signature thick cloud. Around half eleven, bedtime reading is disturbed by hoarse screeching and yelling out the back. Switch off the lamp with a soft click and over to the window to see glowing window panes in the opposite tenements clicking into darkness too.
As eyesight adjusts to the dark, two women can be seen standing across the backs from each other, hurling insults. Each is surrounded by a few youths, kicking back and forth, seemingly disinterested in the cat fight and only occasionally joining in with a fierce roar and a laugh.

It's late and one of the ladies, a blonde in her 40s, is already dressed in nightime attire; dinky pink baby dolls, the knickers of which are shorty-short-short. She gets called in first, as a man comes out the back close door and orders her up they sterrs.
She storms off towards the back door, in a high-handed manner. As she's about to reach the door, her opponent, a tracksuit wearing fifty something, advances and tries to get her leg up and over the railing to get in for a real attack. A couple of her henchmen leap over easily but stop in their tracks when they realise she's not making it and just stand staring at her as she struggles like a big mealy pudden.

The close door has shut over, but just as Tracksuit retreats to her own close, suddenly BabyDoll appears again with another shrill accusation.
"Aw naw, here we go," I think as TrackSuit swings brutally around to face her.
Fortunately, BabyDoll has said her piece and slips back inside and we are spared the humiliation of the middle aged lady's stiff clamber.

Down on the ground floor across from us, the thin face of an elderly man looks out from behind the sheet he has pinned up as a curtain. He hasn't turned off the electric bulb hanging in the middle of the ceiling and in the sixty watt light, he looks gaunt and afraid.
Posted by Nihil Sine Labore at 23:57 3 comments: Links to this post