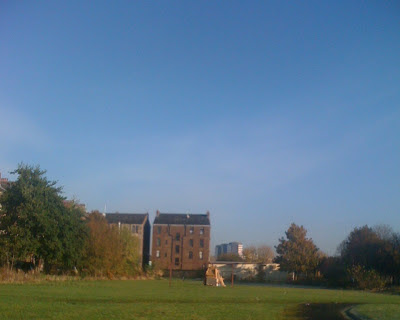 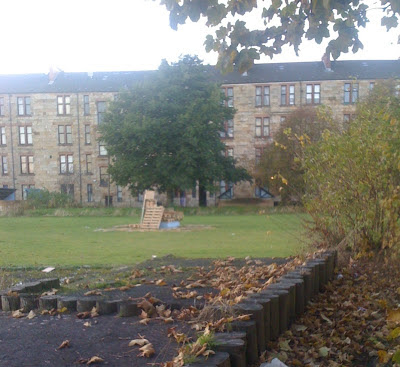 The approach to Guy Fawkes night has been very hush hush. Understandably so, after last year's cruel dismantling and confiscation of the wid.
On Friday the second, benk passes a wee boy pushing an asda trolley full of sticks and planks along the road outside Govan Old, but apart from that, not really seen or heard anything.
Saturday the third and Sunday the fourth are filled with bangs and cracks of fireworks at organised displays and those being let off in back courts and up closes.
Monday the fifth dawns bright and crisp. Glorious blue sky and sunshine beams down on the small beginnings of a bonfire on the grass behind the Bells.
﻿
﻿
Usual striking up time is about 6 o'clock but on my way, I see a good going bonfire in a rundown, red blaize pitch by the old Broomloan Road School.
It's being stoked with doors. A big heap of them are lying on the ground, wood panelled, semi glazed, full glazed, stacked in a pile just outside the low wall of the playground.
There's a few young mums standing at a distance, chatting with babies in pushchairs and toddlers gripping the handles or running around in the dark.
An army of twelve-ish year olds are lugging the doors from the stack to the fire, each taking a turn to lift a door up, shake it gingerly, pause for glass to fall out of it and then drag it - or if you're macho - balance it across your back and stagger to the fire. A final effort sees the door topple flat onto the flames, casting burning sparks into the night air.
In the fire's glow, the old school building looms eerily, hauntingly still, cradle of our grandparents' formal learning, as far as it went. Its stone outer walls are the backdrop to their early childhood images. There they stood, almost a century ago, and here I stand on the same sod, in a world that's turned a revolution or two and yet has not changed. 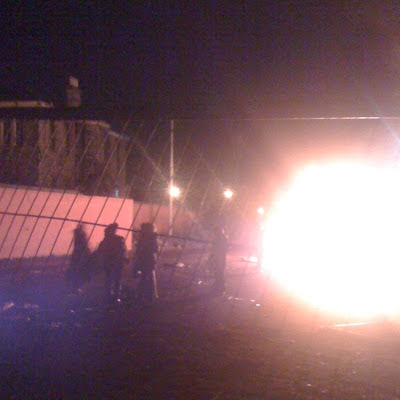 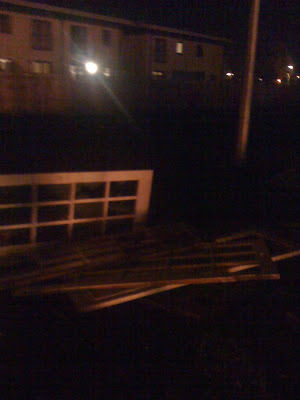 Down Vicarfield Street, and the wee bonfire's been lit on the grass. A few gangs of teens stand around, boys dutifully carting wood to feed the flames. "It's no lasting very long, is it?" whines one girl.
"Who's that wi' the drum?" shrieks another and I suddenly become conscious of a tribal drum beat reverberating around the field.
"A guy ahint the bonfire," and my eyes focus in to see a man gently swaying, head back and looking up to the stars as he palms a drum.
Click, take one of my poor quality photos, and just at that ten year old Jordan shouts to me, "Look oot fur the sticks aff the rockets. Ah nearly goat hit wi wan. It fell right therr next tae me." And we both take a wee skip to the side. 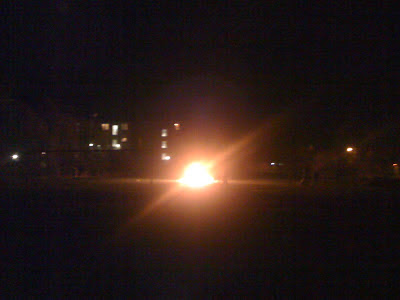 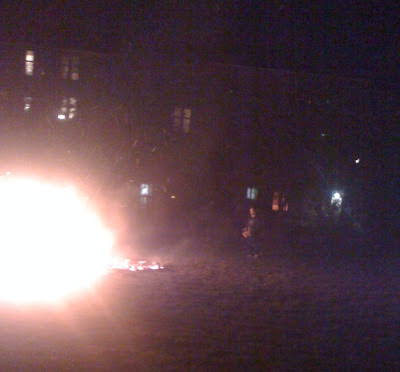 Trendy folks are out at Water Row as I pass. They've built a wee cottage like the one you see in the old paintings and they're opening big iron gates with moons and stars on them for the fairground people to pass into their riverside encampment. 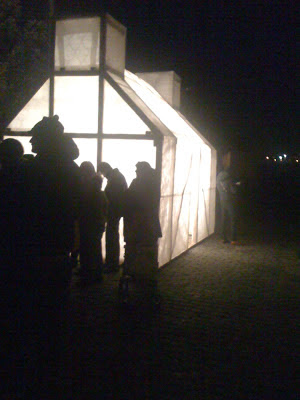