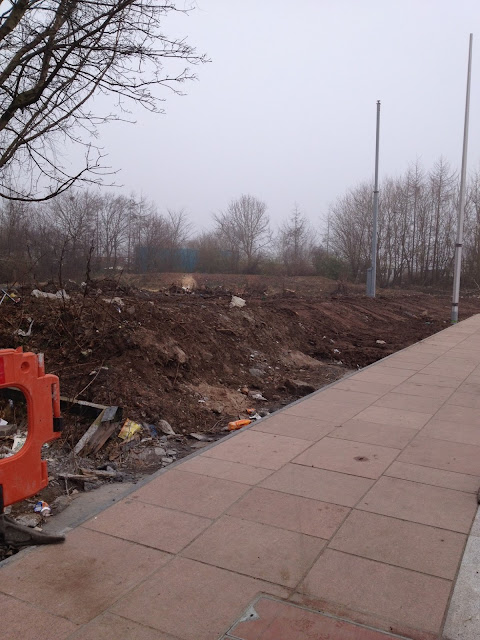 A misty morning, with a light chill in the air, promises hope for radiant winter sunshine later. You can't cut across the historic Doomster car park just now as it's being turned into something official, I think. Plenty of fancy stone, kerbs, turf being laid for the influx of tourists we must be expecting.
All change again for Water Row, passing now to a new era of de-forestation and construction.
Photographs below show the P.I. from Water Row today and back in April 2009. 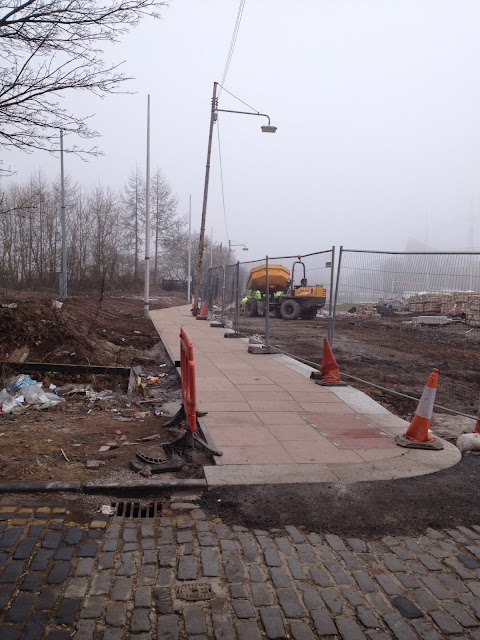 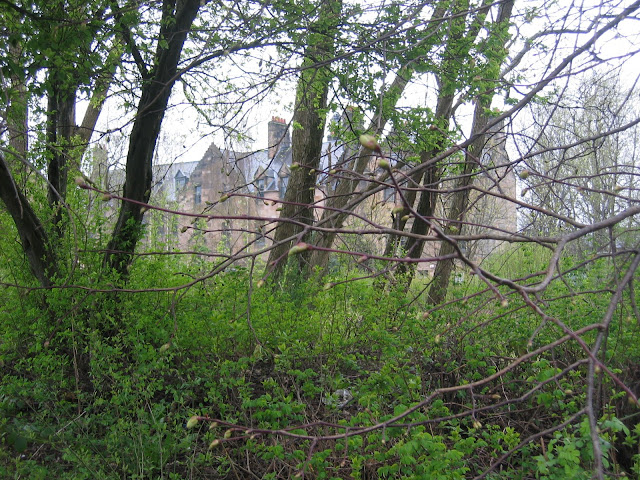 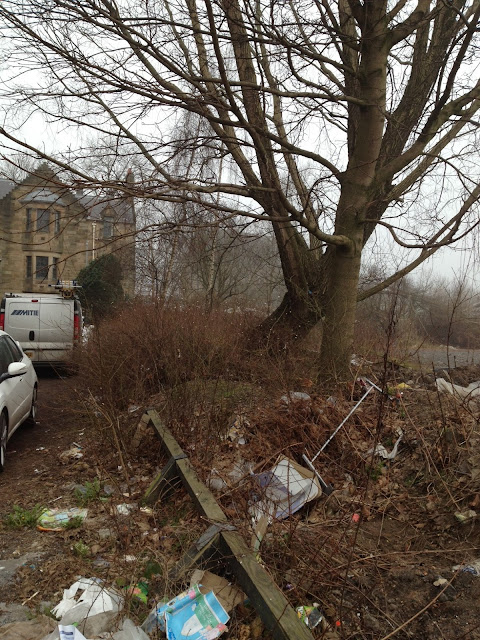 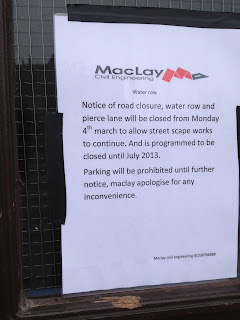 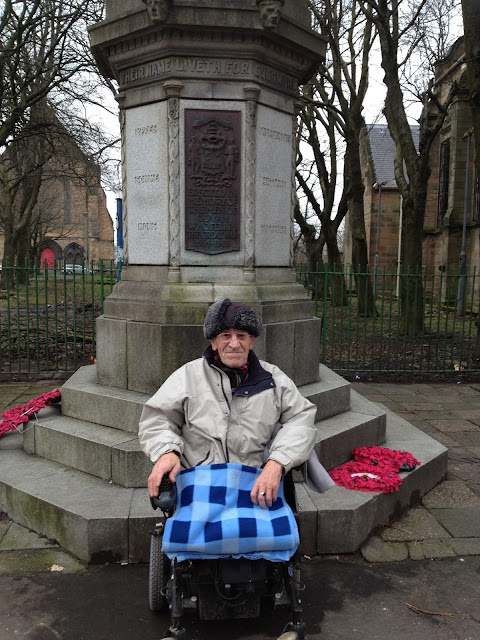 A voice calls to me from the roadside and here's the man himself, tormentor and runner over of dugs, chariot racer on the King's highway between Summertown Road and The Old Harmony Bar on the corner of Shaw Street; Govan's very own granda. He never passes by the war memorial without tipping his Russian hat, he tells me, in memory of the men of Govan who gave their lives in combat wi' the gerries. "Take ma picture if ye like. Hoy!" he shouts out with a punch of his fist as the Fire Brigade shoot past with a honk.
"You weren't fighting in that war, were ye?" I ask, sure that he's not old enough.
"Aye," he replies.
"Is that how ye lost your . . " my voice trails off but he's onto telling how he gave his grandson a thousand pounds for his birthday. Gives him that every year. Everybuddy's shocked when he dishes out a thousand pounds, but that's just his way a doin things.
Posted by Nihil Sine Labore at 23:28 No comments:

Tillie Tells A Tale Of Romance And Deceit

Today we celebrate St. Valentine's Day with a tale from Tillie. Enjoy it whilst scoffing your chocs.

One dark winter's night, my pal and I were making our way back to our tenement homes in Broomloan Road from the FP club at Bella. We were actually still pupils there, but we were allowed to go and join in the games in the gym and swim in the pool.

As we hurried along the street, we were aware of two shadowy figures following us. We sped up and so did they. When we walked slowly, they hung back. Actually, we had a good idea who they were; two boys from the year above us, and we did not wish to engage them in conversation.

We hurried past the stately detached villas of Ibroxholm Oval and just then an idea came to me. My pal and I were walking arm in arm and suddenly, I forcibly guided her down the driveway of an imposing home, saying in a loud-ish voice, "Hurry, Father will be waiting. We can't be late!"
Our feet crunched on the gravel and we crept round the back of the house, giggling quietly as we peered out. Back at the gate, the two boys stood, gingerly looking in but too scared to make any advance down such a posh drive.

About a week later, I was sitting in the front room of my first floor tenement, when I heard a chap at the front door. I answered it and was very surprised to see one of the boys who'd followed us standing in the close.
He looked me up and down for a moment and then said scathingly, "Oh, so this is where you live then. M-hm." Nods his head. "Right round the corner from where a murder was committed."
Then he turned on his heel and walked smartly down the stairs.
Posted by Nihil Sine Labore at 17:30 No comments: 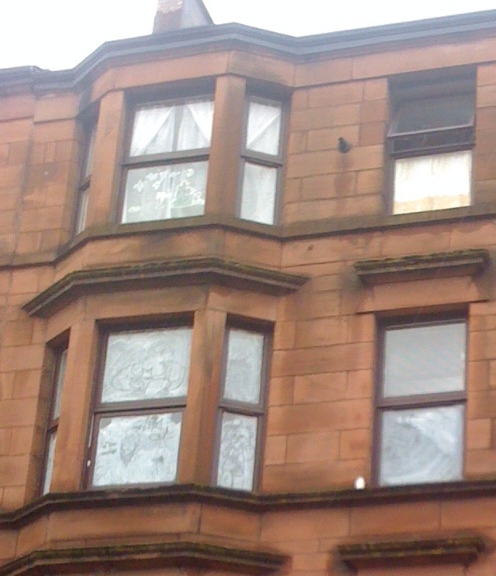 Lady Govan was always quite posh and was first in her class at school to have a colour telly. The family also had a refrigerator, Frigidaire, with a toty freezer compartment at the top, in which sat a metal ice cube tray affording LG and her pals deliciously cold bottles of water on summer picnics.
Today I catch sight of a bottle of milk out on a Govan tenement window ledge. This instantly brings back to memory my best teenage friend. With no fridge in her kitchen, the glass milk bottles stood out on the window ledge or in a basin of cold water to keep them fresh. Cheese sat on a larder shelf under a dish. Vegetables and fruit were bought and eaten every day, so no need for refrigeration. Ice cream was bought off the van in the evening; a cone, a single nougat, an oyster, or a tub - with a splash of raspberry. Ginger bottles stayed cool on the stone floor of a dark cupboard.
﻿
Posted by Nihil Sine Labore at 18:51 4 comments: