What's It To You? 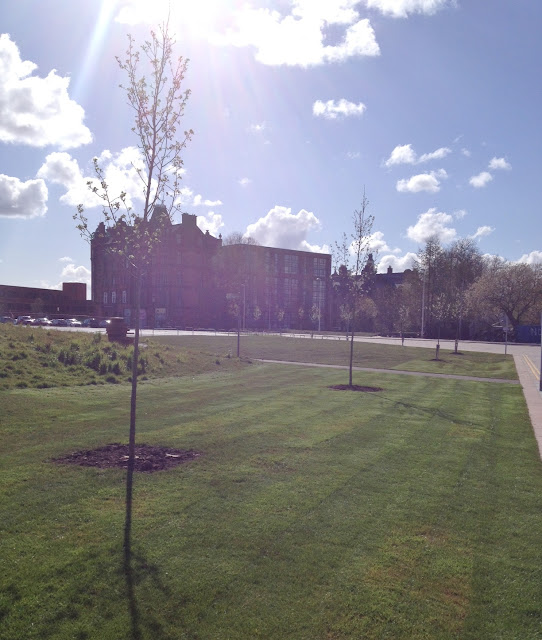 Another picture book edition, with photos taken of the newly landscaped Water Row on our leisurely walk this warm, sunny afternoon.
Can't say it's not nice; lovely stonework, the magnificent river, the old ferry mechanism cleared of weeds and exposed to view, the grand city of Glasgow upstream, and best of all an amazing smell of newly cut grass which takes both me and Wee Raberta right back to sitting by the open window of a classroom. And, memories and nostalgia for times past are what may form our opinion of Water Row 2013. So very different to industrial Water Row 1963, but that in turn was so different to pastoral Water Row 1663. And what if you were from Water Row 1463, or 1163? You're always going to be sorry to see change. Anyway, just got to get on with it and enjoy what we've got. 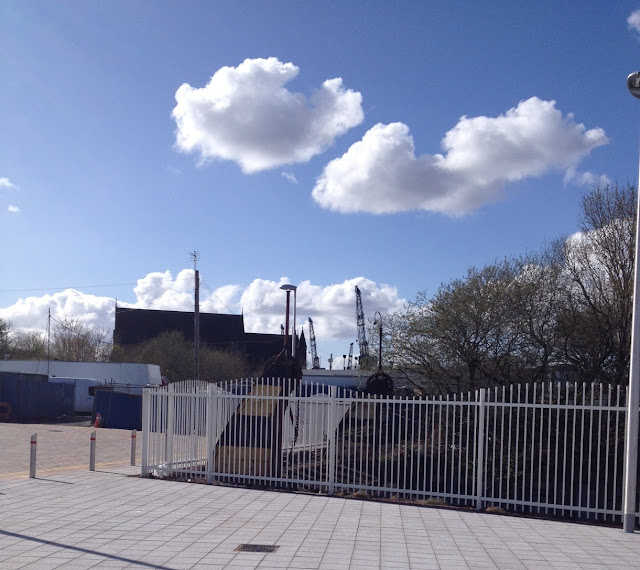 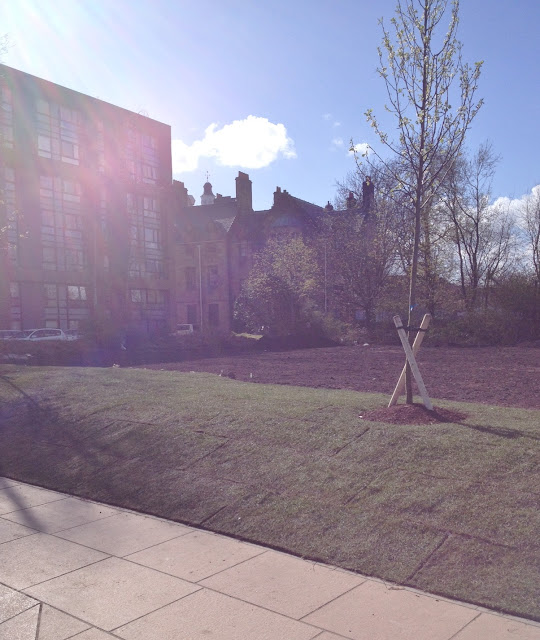 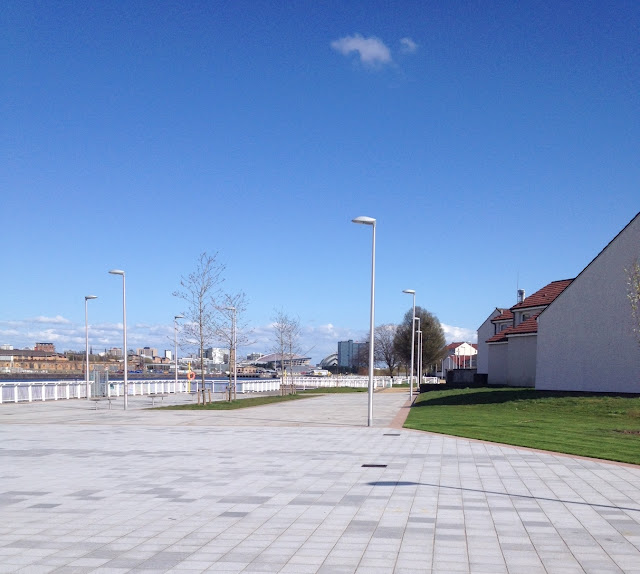 And the wind blows erratically along the Clyde, lifting and dipping, chasing leaves and tired weeds along the dry docks, rippling the river to little peaks. My hair is blown north, south, east and west, across my face and clear again as I cycle into a fair headwind.

A bright day, though bursts of melancholy pierce the gusty breeze. Derelict and dejected dry docks, lit by sun and shaded by billowing clouds, lie empty and forlorn. Berthed at the new museum, flags on the Tall Ship stream merrily in the air and a dinghy bobs on the water.
The weans are out playing, one boy on a bike with three others chasing him for a shot and a big sister lingering dreamily in the background. One broken toothed rascal races with me, sharp eyed and savvy, "Can Ah get your bike?" "Naw." "How no? C'n Ah?" then spinning and chasing after his pedalling pal again before picking up a long trunk of plastic piping and whirring it round and round his head.
Posted by Nihil Sine Labore at 22:37 1 comment:

A Walk In The Park 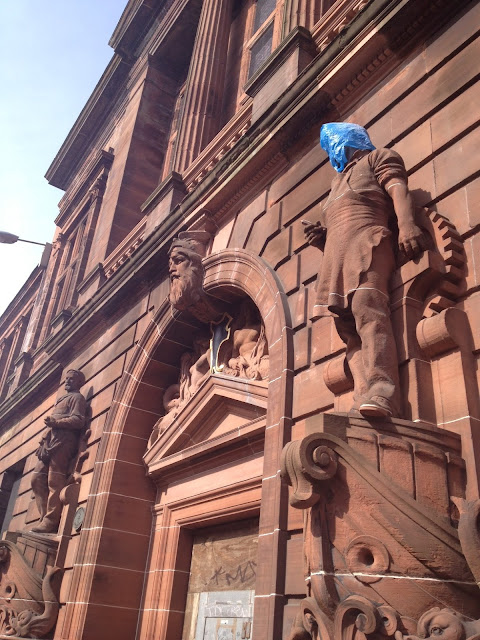 A splash of sunshine and warmer temperatures tempts us out of doors for a bit of recreation at Elder Park. It's not quite warm enough for a saunter, so we press forward on the sunny south side of Govan Road. At Fairfields, the honourable shipwright has been suffocated with a blue plastic bag, a strangely sinister version of the Duke of Wellington's traffic cone hat, up the town. 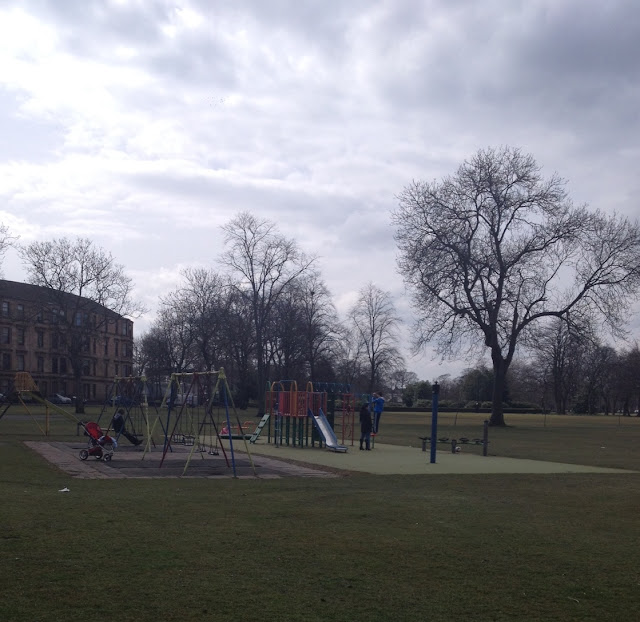 There are a few little blondie children playing on the chute. Their mothers sit close by, chatting in Polish and snapping at the kids when a disagreement breaks out. The Govan weans sit astride the roundabout, spinning it round, rocking it up and down as it goes. Two guys are pushing a curly, specky wean in a swing. "Don't go that high," says one in a nasal whine, "That's a' ah wid need. Him 'i fa'. Ah canny huv that oan ma conscience man." 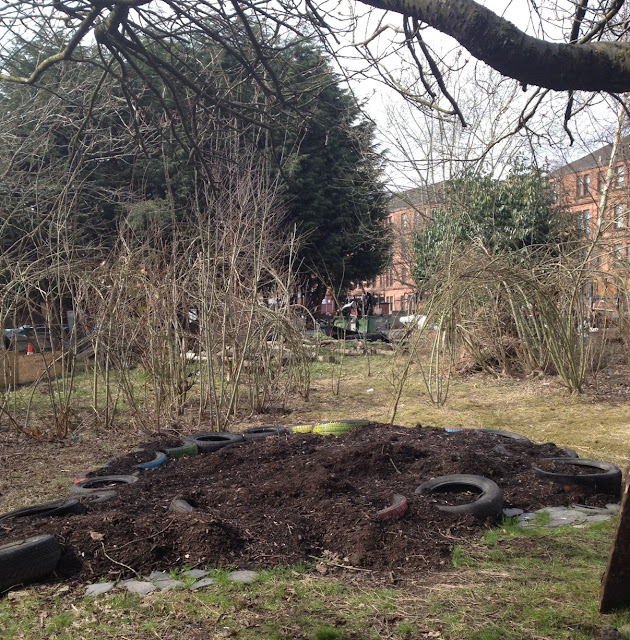 At the community garden, by the Farmhouse, we hear voices, an English man's and some squealy children. We peer through the fence and see them building a treehouse. 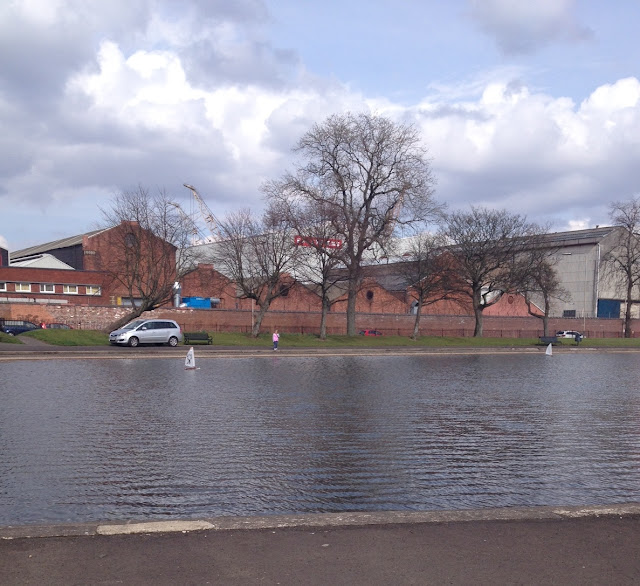 There are two boats out on the pond today, gently blowing from one side t'other. The sun is warm, so maybe this is a good day to verify our Govan Baby's status by dooking him in the Elder Park pond. Splash! 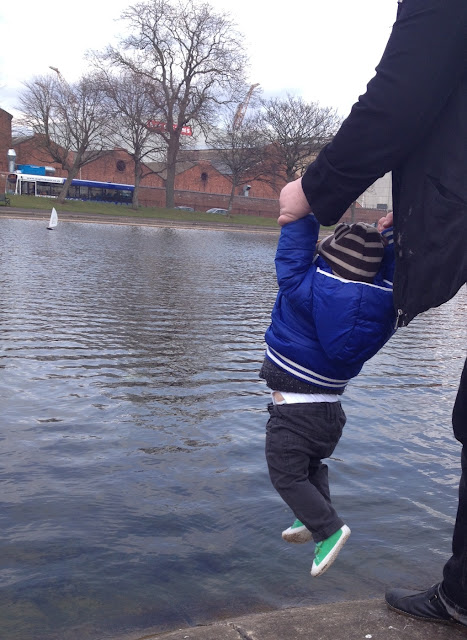 The park gates require a bit of attention. I believe Fairfields is being attended to. 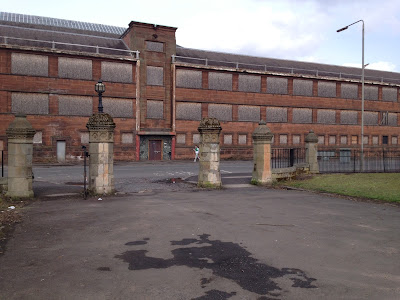 Ancient Order Of The Sable Brush 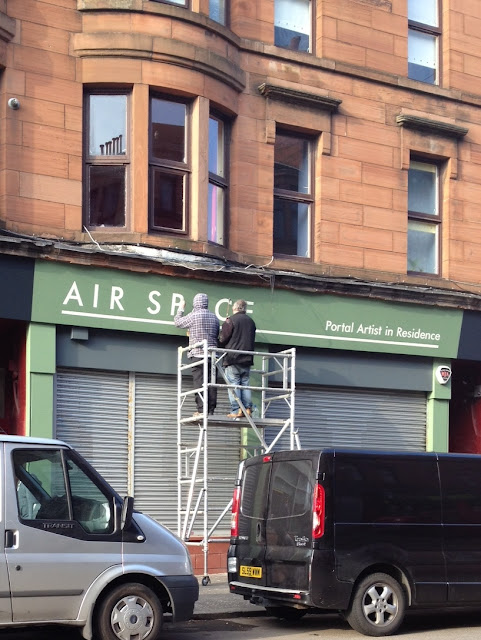 As the granddaughter of a Govan signwriter, I think it's great to turn the corner of Howat Street onto Govan Road and see a shop's signage being hand-painted in the traditional manner. Dunno if it's stencils or the real thing, but whichever is waaayyy better than vinyl and plastic. 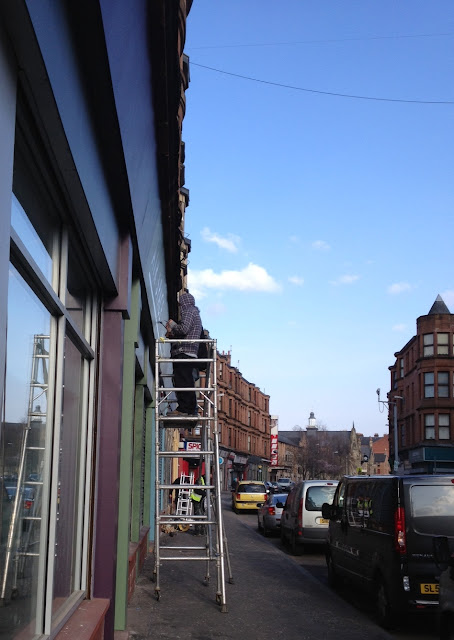 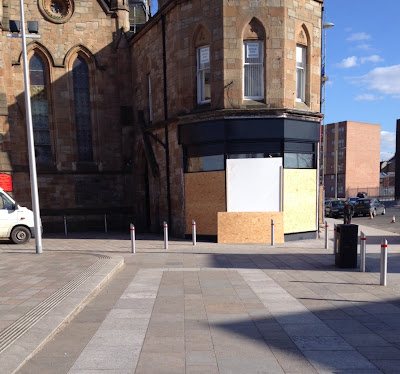 Aaaaawwww, whit? . . . This bodes ill for the gentrification of Govan Cross.
Oh dear. 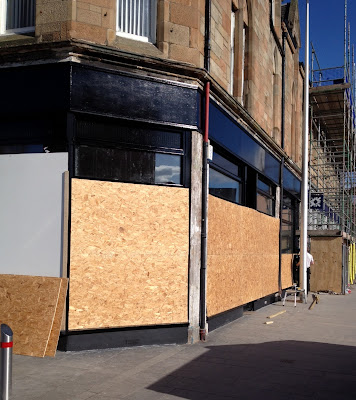 Not seen one of the neighbours for a while? Sometimes that's a blessing and you don't question it too much. This time last year, wee T. was a wee pest. In and out at all hours. Can ah use your phone, can ye pick up a coupla messages, d'ye mind giein us a lift roon the doctors.
Then all of a sudden, all went quiet. He disappeared. I didn't ask anyone about him cos, as I harshly said, he was a pain.
As time passed, I thought - now and again - that I should ask if anyone else had seen him, but it never crossed my mind at the right moment.
Today, though, I sees Joe with swarthy Boab of the Badlands. They're deep in conversation on the path through the Riverside, Joe with his thin supermarket bags stuffed with bread and tins.
"Hi Joe," says I, in passing and he nods and then I suddenly think of wee T. "Hey, by the way, have you ever seen wee T. for ages?"
He stops his chat, "D'ye know, naw. Ah've no seen him for an age. When wis the last time? Right enough, it's a good while. Done a coupla guys for money when he tried to haud up asdas. Ma pal got taken for eighty quid. Had'm tied t' a cherr."
"Just been wondering," I says "cos he's done a disappearing act."
"Aye, he has that. It's like he's disappeared aff the planet."
Black Boab joins in. "Who's that?" And Joe recounts again how his mate got done for money by wee T. "Some folk ye jist don't dae that tae."
"Aw, Ah know him - weird lookin wee guy. Like a hobbit?" says Boab.
We both nod.
"Dunno whit's happened but canny say Ah'm that bothered" Joe continues, "Ah don't think ah've seen him for, whit, three month?"
"Three month!" I gasp. "more like over a year since I laid eyes on'm."
"Maybes," says Joe and goes into a long story about how wee T. had conned a lot of people.
"Wee tealeaf," says Boab.
"Just kept meaning to ask." I say again and Joe pats me on the shoulder. "Good neighbour award, heh heh."
Posted by Nihil Sine Labore at 23:48 No comments: