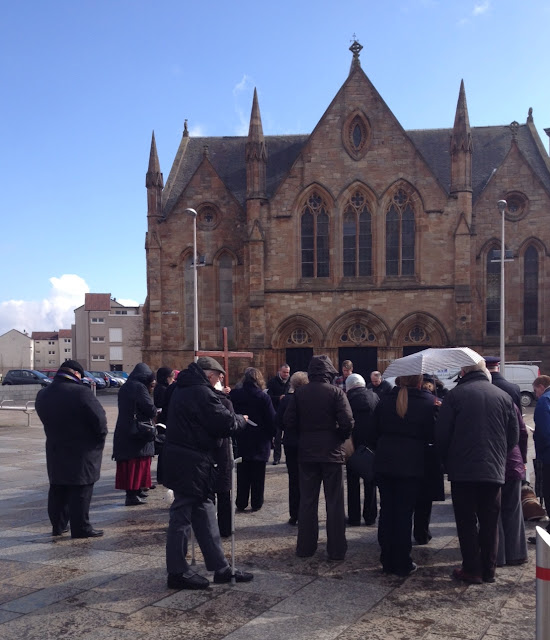 A bit of Easter cheer today after a chilly couple of weeks. The wind has been so harsh that it's been a thought to go over the door. The run up to Easter's been filled with colds and flu, coughing and sniffing, sore throats and sore ears. A bit of a respite on this Good Friday, as we see a glimmer of sun and the air feels a wee bit warmer.
I usually catch this church group as they wend their way from Cockburn's Funeral Service to Govan X, but today I see them outside Govan New where they sing a hymn and listen to the minister before dispersing. 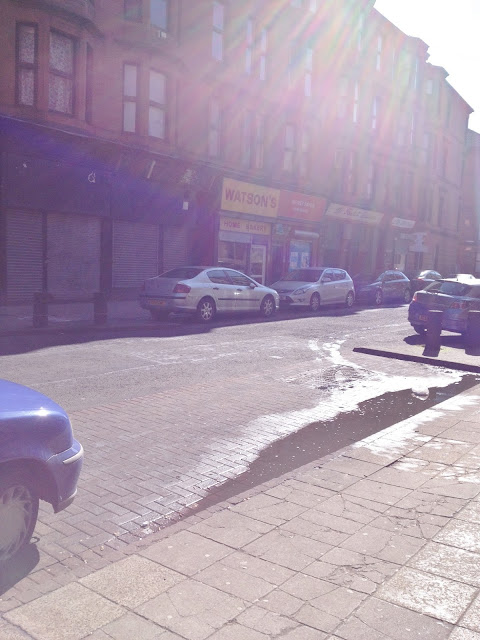 At Shaw Street, I snap a sun-filled street with two important shops open for business. I was recently chastised - rightly - for neglecting to mention Watsons in the five year anniversary post. So, here's a few enchanting pics. Btw, whose idea was it to lay those slabs on the ground? They are an eyesore and not half as nice as the tarmac as was laid in times past, smooth and cushiony - great for riding a bike, going on rollerskates, bouncing a ball. 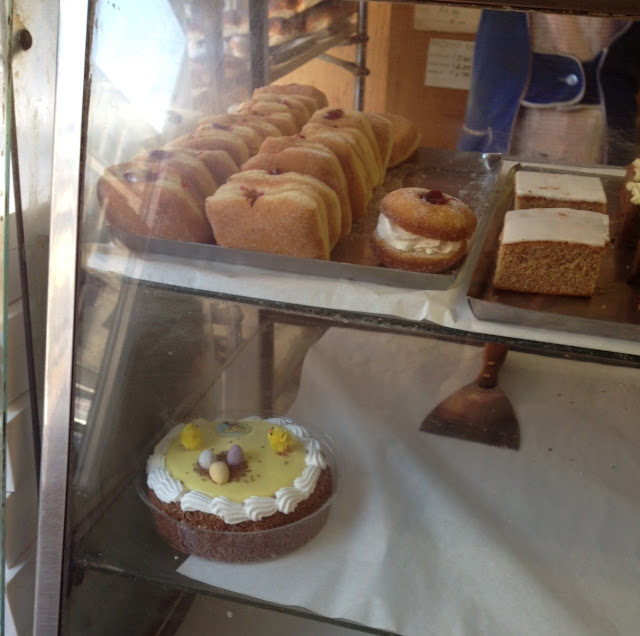 Into Watsons in the hope of getting a few Easter treats, but I've left it a bit late. It's about quarter to eleven and a lot of stuff's away. There are Easter cakes though, with little eggs and chicks and the man in front of me asks the price. Jean says they're three pounds and he buys one and when it's my turn, so do I. 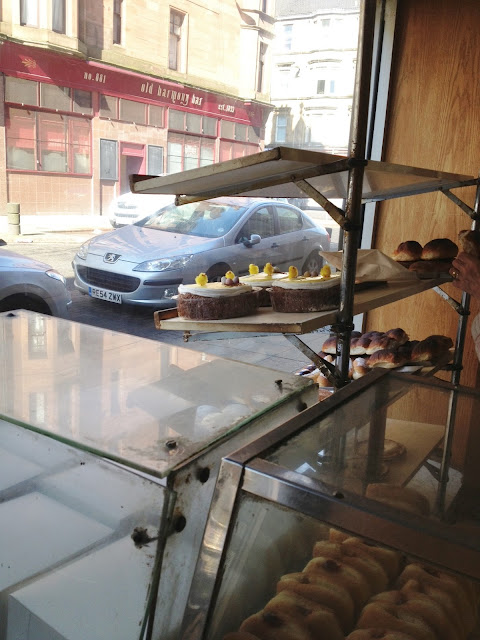 Jean takes one off the shelf in the window and makes up a white cake box, puts it inside and fastens it closed with an elastic band. There's still plenty of baked goods on display, worthy of a snap. See the three cream cookies on the top shelf above the chocolate icing buns? I buy them - and a coconut icing bun which I eat before I get home. haha. 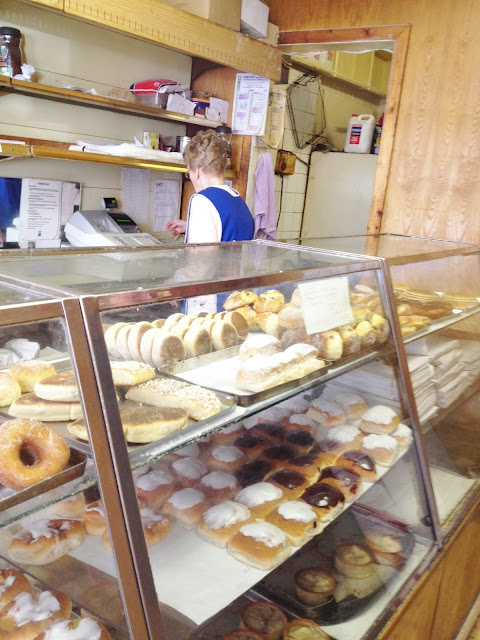 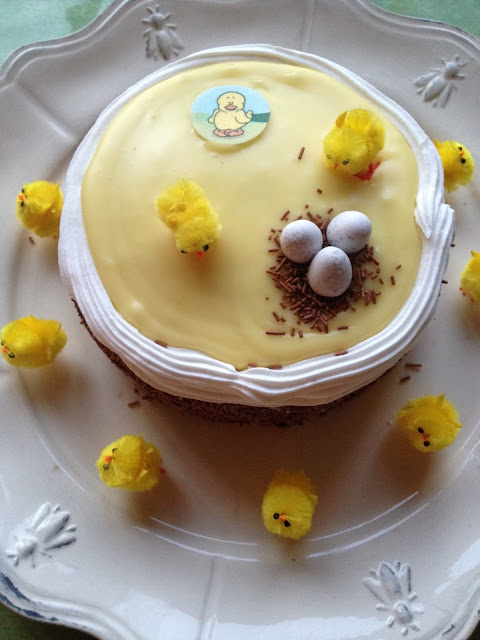 The Easter cake is delicious. Yes, the yellow fondant icing is the same as you get on a pineapple souffle. There's a mess of sponge and cream inside, yum. Only crit is the piped cream around the circumference, which is actually hard sugar stuff. I chip it off and cast it aside as I feel I've already had too much of a sugar rush. Wheeeeee! Happy Easter Govanites everywhere! 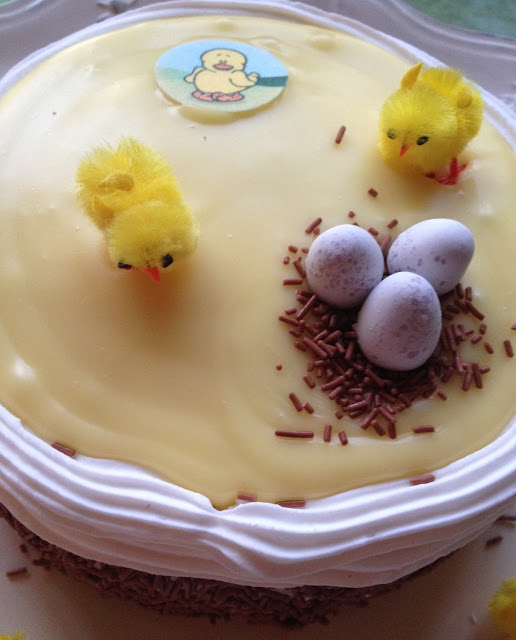 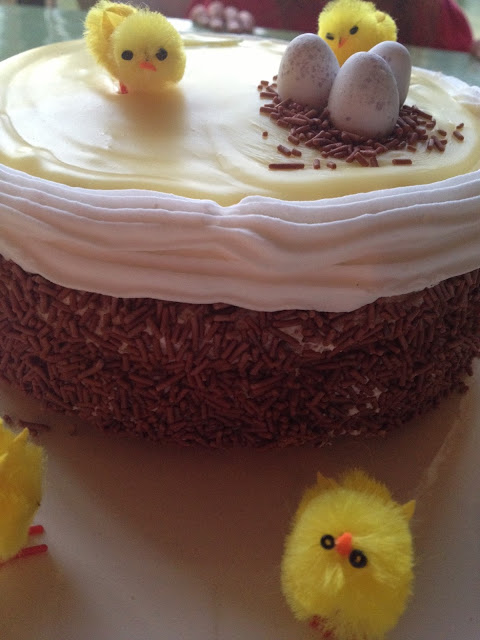 To hang with my diet, I need to get some of these goodies :-)