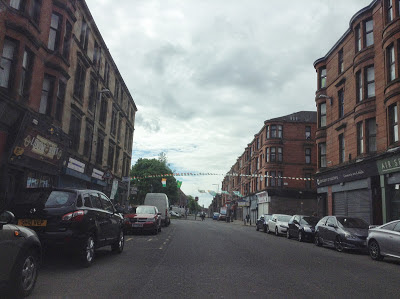 Well, some folks are happy. 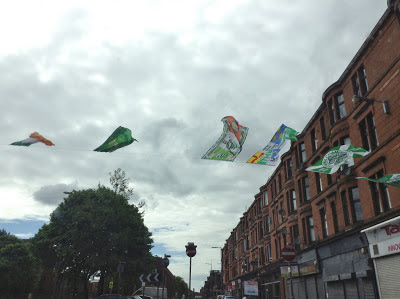 Posted by Nihil Sine Labore at 21:23 No comments: 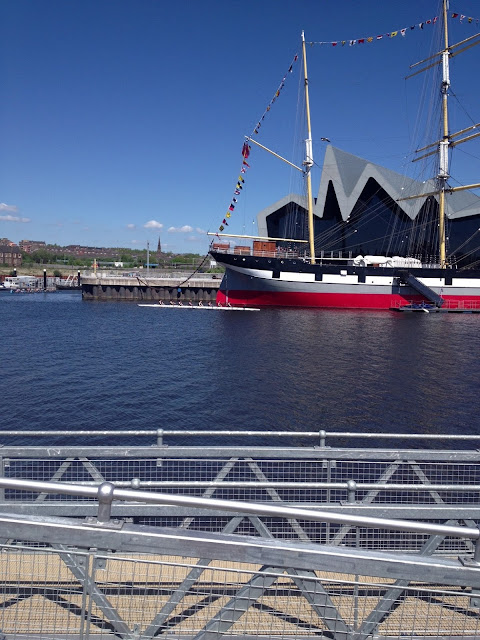 #SBR13. Edinburgh beat Glasgow, apparently. We had a picnic in the sun, in the shade of HM Queen Elizabeth and Prince Philip. Well, the trees flourishing in their honour, I should say,
Our grub is rolls on ham n cheese n salad, McCoy's crisps; assorted packets of Salt & Vinegar, Cheese and Ready Salted, bananas, chocolate biscuits. Me and Hoi Polloi have bikes, the babies are in their chariots, my ma goes for a wander at the Govan Market and gets the lowdown on Dysons from a stallholder.
As the boats cross the finishing line, the winning team cry out a lusty three cheers for the losers. Ma da joins in with a few, "Jolly good, old sports!" from the bank.
He's soon joined by an aunty and two great aunties who've come to cheer their rowing star.
"Kieeeee-ran! Kieeeeee-ran!" shouts Aunty, but it seems Kieran, floating in boat below, cannot hear as he remains head down.
"Kieeeeeeeeeeeee-rrrrraaaaan! He canny hear us. He's in the Glesga uni team," she tells us, "he's fae Mosspark." 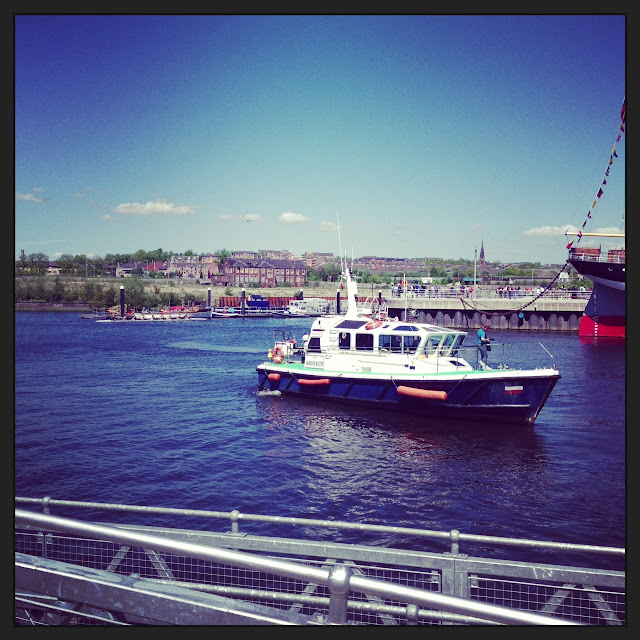 Posted by Nihil Sine Labore at 21:22 No comments:

Two Nights In A Row

An hour after the school bell dismisses the weans, I am fast approaching a pair walking through the Riverside scheme.  One is a girl of ten, with a tangly ponytail and sequinned hairband set at the top of her forehead. She is wearing a tight cream t-shirt, encrusted with sparkles and tight cream leggings with fancy patent leather slippers set off with bows. The other is a boy of seven, ginger haired and freckly faced, not changed yet out of the school polo shirt and carrying a coupla ginger bottles.
They are accompanied by an elderly gent, old school, with a collar and tie and a bunnet on his head. He's only just taller than the girl and is peering over at her through black rimmed spectacles and saying in a hoarse whispering voice,
"That's the other wan died I telt you aboot. What'sisname? Aiden?"
and the girl's leaning over the wee boy into the man's face and saying, "Aye, Ah heard it."
"Aye, I told you aboot it," he's saying as I make up on them, balanced by my two heavy bags, one in each hand.
"It was drugs, one night after another."
You can hardly make out his wee, gravelly voice.
"Yous remember that and yous've not to take them."
A woman is walking towards them as I overtake and she says, nodding her head, "That's right, two nights in a row."
"See that," the old voice whispers, "Two of them, one after the other. Drugs." 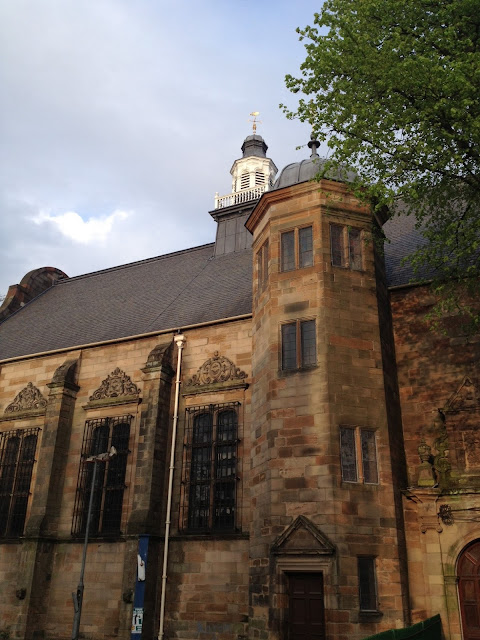 Yesterday was a day of dark, overcast warmth but today the heat is broken by a gusting wind which brings a chill to the streets. By evening, it's calmed a bit and me and the Govan baby take a saunter. The weather vane atop the P.I. gleams gold against a dappled sky. Three smokers stand languidly at the door of Brechin's, cars hum along the Govan Road and we turn off into Govan Old.

Spring 2013 has been delayed by consistently cold weather, but in the confines of the graveyard we are enveloped in Govan's greening. Fresh and vibrant, buds are bursting into new leaf green. Cherry pink petals flutter in drifts across the mossy graves. 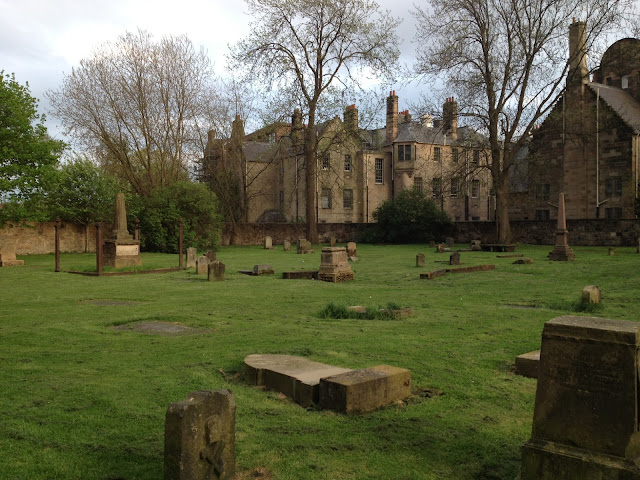 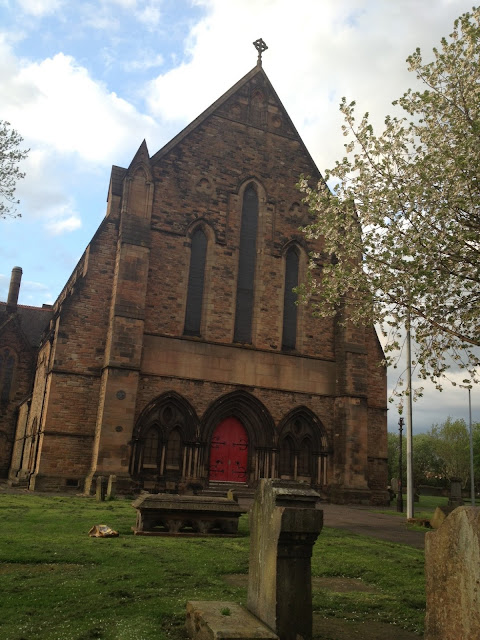 A woman is standing at the front of the close, "Could'je gie us a haun' wi a hingmy; it's too heavy fur us." Slight and wan, with tangled hair of dirty fair, she has an almost pleading look in her eyes.

"Sure, it's fine," I say and follow her into the close and up to the top flat. This close is narrow and dirty, smells of greasy dinners and stewed tea. All the way up she's talking, telling about the state of the house and how she can't get anything fixed in it and how she's going to find another place, but just got to clear some things first. "Ah've flung some stuff oot a'ready, but Ah want riddathis n Ah cannae lift it masel'."
It's a sideboard. We could lift an end each, it's not too heavy, just made out of kid-on wood, the veneer stripping off in places, chips out of it and handles of gilded plastic hanging askew.
She goes off to get a key from the bedroom and I glance around the livingroom. Various layers of wallpaper are on show, patterns floral, patterns striped, some areas stripped right back to the wall, some bubbled up by damp.
"Ah've been asking to get us a new place but they're no bothered," she says as she comes into the room again, "See that," pointing to the door, "That wis him. Done in ma hale hoose n Ah cannae get them tae fix anythin." The door is gouged and scraped and a boot size hole has been kicked almost right through.
"Ma pal done this for me," she says, picking up a framed decoupage picture of a bunny holding three balloons aloft. "She done it in Cornton Vale. She died; good pal, good friend." I hold the picture and admire it.
"Is somebody taking yer stuff away?" I ask as we struggle down the last flight.
"Aye, got it arranged," she replies and out we go into the sunlight and drop the furniture onto the kerb, right by a bundle of bedding that she'd taken down previously. The stench of it rises up as we talk; pale grey duvet, sheets and a blanket wrapped around a thin z-bed mattress. The stink is overpowering as we stand in the midst of it, me wishing her well with her move, her telling me not to worry, she'll get it all sorted out.
Posted by Nihil Sine Labore at 23:38 No comments:

We're huddled into Greggs, trying to keep out of the cold, gusty rain. The queue is lunchbreakers, lining up for hot sausage rolls, bridies, steak bakes and soups. Everyone's wearing their jackets on this not so fine May day and, yeah, if we're honest, there's a wee bit of quiet grumpiness in the air, annoyance at the return to cool temperatures after one lovely day on Tuesday.
There's a sudden scuffle at the open doorway as a young guy pushes in, nudging a woman out of the way with his shoulder, and slipping sideways into the middle of the shop. He reaches between two shoppers to lift a ready-made sandwich and a bottle of orange juice from the chill cabinet. Lifts them with one hand, sandwich tucked into the palm and bottle between thumb and finger. Then, he nimbly swivels round and pushes past the first person and the second and then finds his way barred. A very tall, well built man has stepped sideways into his path. The boy slips to his side but the man mirrors his move. The boy dodges to the other side, and the man blocks him again. The man speaks, quietly. "Put it back."
The guy is a skinny wraith, his miserable, pale face juts out of a black hooded top. He pushes again, but this is a big, tall man, middle aged with the stature of the polis of yesteryear.
"Did you no hear me? . . . Pit it back."
Seems he didn't hear, cos now the boy makes a determined effort to force his way past.
"You're no getting outta here till you put that back," and the man takes the sandwich and the bottle out of the boy's hand. The goods are given up easily, but the boy yelps in protest, "Ah've no hid nothin tae eat," as he falls out of the open doorway and skulks at the window, looking at the cakes on display.
We resume quietly queueing and the man holds onto the sandwich and the drink till his place in the queue reaches the chill and he places the items back on the shelves.
Posted by Nihil Sine Labore at 23:38 No comments: