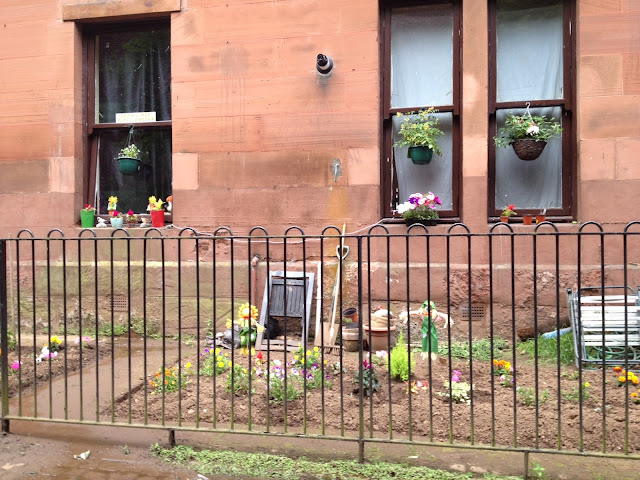 Days of golden sunshine beam upon Govan's dusty streets. Even the deep, red canyons of Luath Street and Taransay Street catch a gritty gleam and the heat of the day boils in the skies above and sinks slowly down to the cool, shadowy floor.

"Eddie's Wee Plot & Garden" is a fine horticultural display, irrigated and tended with loving care.
Down the street, one man pulls a hose through a ground floor window and shouts to an unseen person indoors, "Hook it up, hook it up. Turn i' oan noo. Turn it." There's a heap of broken glass on the road and he crunches through it in his flip-flops.
A maiden breezes round the corner, broad and husky with a mop of frizzy curls and rude, red cheeks. She stretches out an arm of rolling flesh and cries to an upstairs open window, "Yous comin' tae Keiran's barbecue? Haw!"﻿ 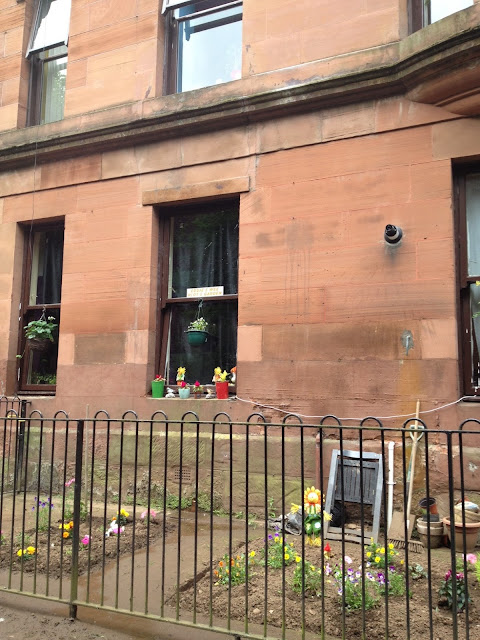 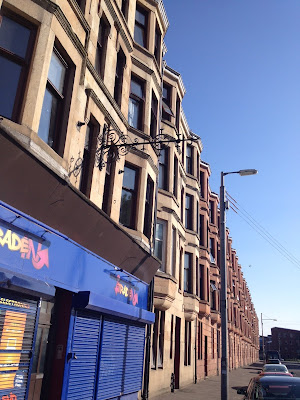 A band of half a dozen 50 year olds dodge behind and in front of the billboards on Govan Road. They are dressed in summery attire; white baggy shorts below the knee, coloured net vest tops and trainers. Cool shades and chunky gold chains lend Miami gangster style to these old kids on the block as they throw back their heads and casually swig from their bottles. 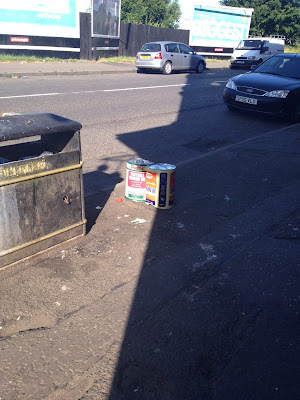 Posted by Nihil Sine Labore at 23:43 No comments: 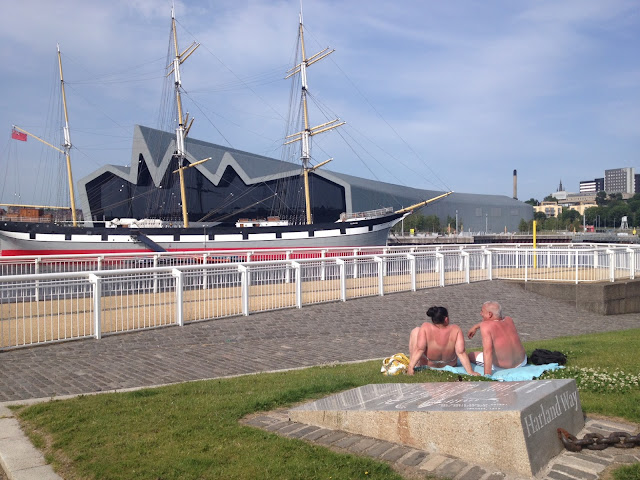 Blazing sun or lashing rain seems to be the two weather options for Fair Friday and 2013 has favoured us with a continuing sunny spell.
Down on the Costa Clyde a pair of sun worshippers have spread their blanket overlooking the award winning Transport Museum, and cast aff their clathes with gay abandon.
"Słońce jest cudowne," she is saying, which translates as summat like "Ratsunspyoormajicbyraway".

Posted by Nihil Sine Labore at 19:51 No comments:

"We're havin' a heatwaaaave, a tropical heatwaaave, the temp'rature's risin', it isn't surprisin', we're havin' a heatwave," so the backcourt chorus girls would sing at the start of another summer show.  A full season of sell-out performances would be on offer as long as the schools were off and the sun was shining.

It is roasting today and here we are, sitting in the sun and reminiscing over our days as stars of the backcourt stage. Curtains and sheets were hung over the clothesline and performers would queue up to sing their hearts out or shimmy and shake to an eager wee audience, who'd respond in turn with a rousing cheer or a hissing boo.

Hollywood was always top of the bill, even from movies that had come out decades ago. Most shows started with "There's no business like showbusiness," with full cast of singers and dancers, Busby Berkeley style. Then on with soloists, duets, and ensembles, who'd practised long and hard together and sometimes fell out - even onstage. Up tempo was the order of the day and any long, slow ballads were met with jeers and yawns, as were poems.

By the late 60s/early 70s, Oliver! was a standard and produced enthusiastic renditions of "I'd Do Anything" and "Gotta Pick A Pocket or Two". These were fully choreographed with Cockney accents galore (which also came in handy for Mary Poppins numbers, such as "Supercalifragilisticexpialidocious") and which couldn't have sounded any more phoney than Dick van Dyke's.

Tillie recalls extravagant costumes being fashioned from crepe paper for shows out the back in the 1940s. Tiller Girl style bows in the hair and on shoes, sashes around the waist and even capes. Bridal gowns of white satin and lace and bridesmaids dresses of every hue were luxurious additions to the wardrobe. Donations from aunties of stilleto heels and fancy jewellery showered us with showbiz glamour.

Songs from the movies were top of the bill, including "Happy Days Are Here Again!" and a few artistes specialised in scenes from Singing In the Rain and the songs of Al Jolson.  The Highland Fling also made an appearance, as did the Sword Dance, with a couple of walking sticks for the swords.

The shows were free, although there was sometimes an impresario who'd demand payment of the audience. They didn't last long as there was always another show starting up at the next close or so.
Adults sitting out in the sun would watch, help with the curtains, give a hand with the costume making, sometimes you'd get a mammy who'd join in for a wee minute with a dance or a song.

I've been looking out for open air concerts this heatwave, but haven't managed to see one yet. Come on, let's get the show on the road!

A deep, noisy belch resonates in the toiletries aisle of our fave Govan X shopping centre cheap shop.
I can't help it, I look round with a start, to stare right at a wee wumman who is bending over to pick up a face cream.

"Oh! Pardon me!" she exclaims, "That's that salad roll fae that new cafe ower the road."
Heh heh, she chuckles as she continues shopping, her wee man standing by her side, holding the basket with a look of long suffering.
Posted by Nihil Sine Labore at 21:52 No comments: