Taxman's Out To Seize Your Pennies

The weans is aff for the October week and the weather is dismal. At the shops, they are traipsing round after weary adults, keeping up incessant whines. In Iceland, I can hear - but not see - an altercation taking place a few aisles along from me. A young boy's voice asks, "Can Ah get . ." followed by an item of food, say jelly, or soup, or a packet of chocolate digestives and the response is a very loud and harsh cuss word and snarl. This is repeated several times.
At first you don't notice it, but as it goes on and on, I become interested in seeing the owners of the voices. I cut across the shop and by the cupasoups, I see a granny - trendy n chubby - wearing her hair in a high pony tail and pulling a shopping trolley. Her overly-curvy pins are clad in leggings, decorated with little, glittery skulls and her bag has a matching sequinned skull clasp.
Her tormentor is a tracksuited teen, just. He is the master of a constant stream of requests. He lifts packet after packet and tin after tin. "Can Ah get," and the only reply he ever gets is negative and peppered with expletives.

Out the front, next to the Job Centre lies Hector the Inspector of HMRC. His owner has formed him from an old jaiket, trousers and his own trainers, all stuffed with plastic bags. The wee ginger entrepreneur is about the same age as the Iceland greetinface, but this guy's very cheery indeed.
"Scuse me, could you spare some change? Penny for the guy," and he smiles as he takes the coins from people's hands and says politely, "Thank you and you have a nice day now." 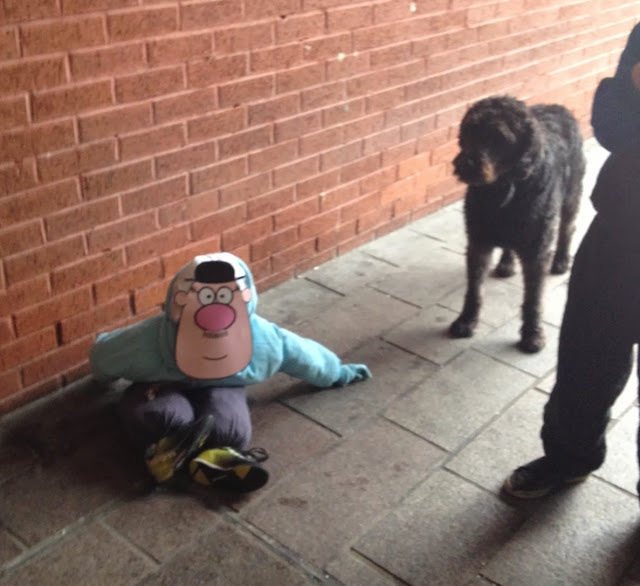 One of the labradoodles gazes at this worthy candidate for Bonfire Night;
Hector the Inspector of HMRC 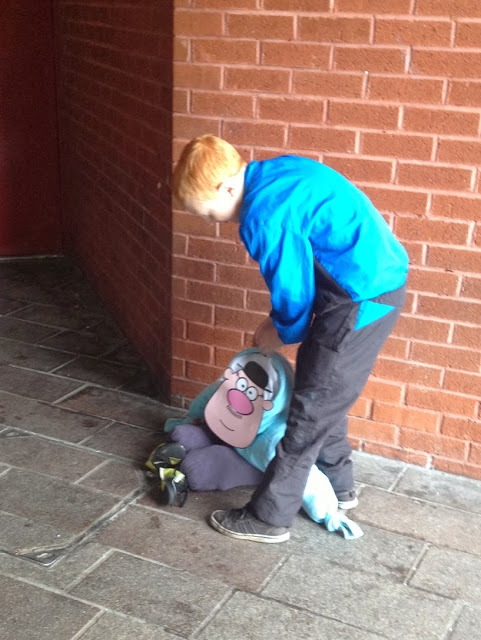