Over The Rainbow, Skies Are Grey 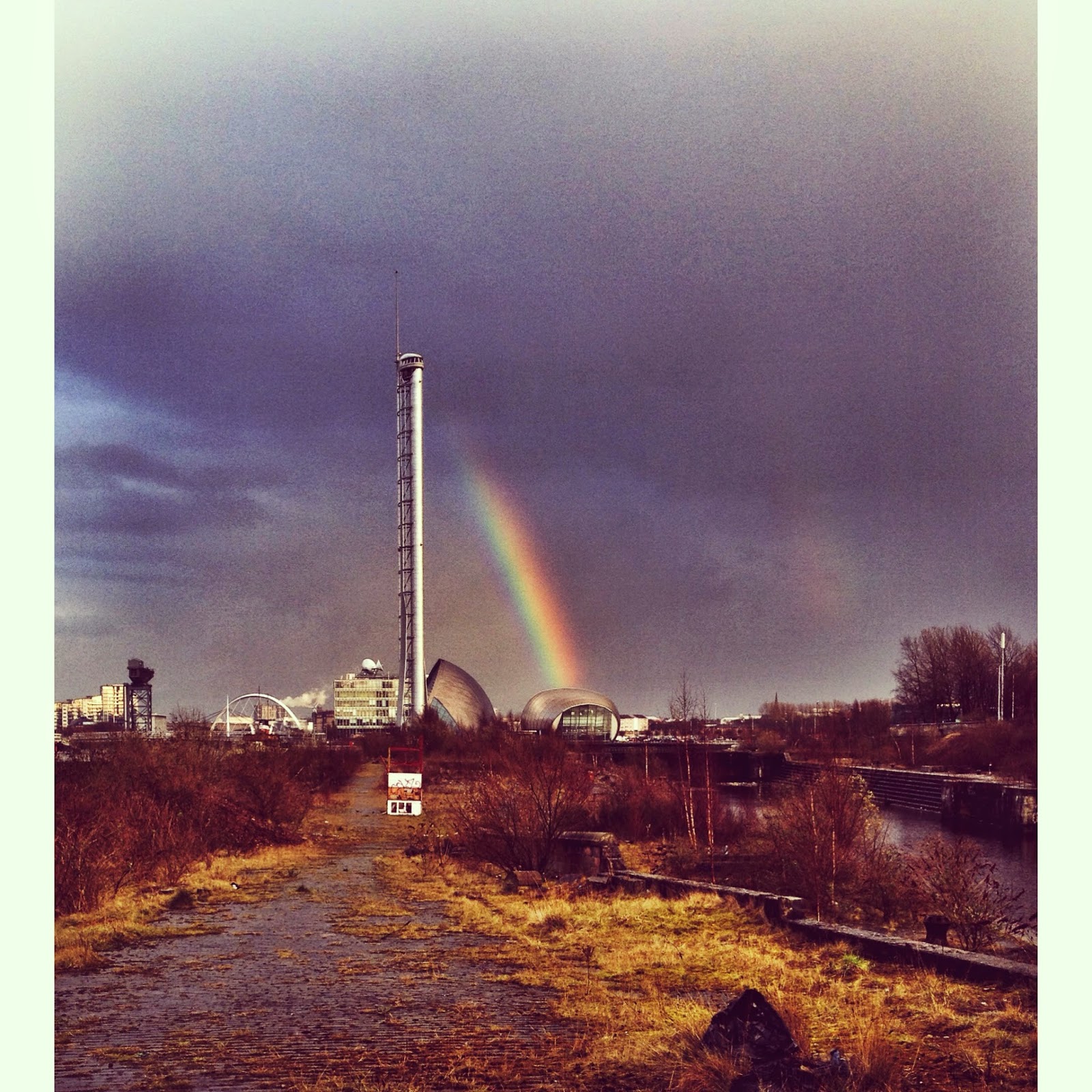 A startling blaze of colour in a stormy sky over Glesga toon; the view from Stag Street, overlooking the graving docks.
Nat fae Howat Street says this is getting cleared for fancy houses which brings to mind the story of Peev who was talking posh at school one day.
"Dae you live in a boathoose?" asks wee Gadge.
"Me? Where would you put a boathoose in Ibrox?" she snaps before realising he thinks she's so fancy that her family must have bought their house - a bought hoose - instead of renting.
Posted by Nihil Sine Labore at 20:43 1 comment:

Sharp As A Two Edged Sword

Pat catches us up on the Govan Road.
"No bad the day."
I nod and we keep walking.

"Yesterday, I was like, yes! Gets on the shirt, nae jaiket, doon the sterrs, oot n right back in again tae get ma coat oan."
I laugh, "Too right. Cannot trust sun at this time of year."

Years ago, Pat had two ornamental sabres which he kept stored in the attic above his top storey flat. When he moved to his current house, he forgot to take them. He went back the next day and asked the new tenant for access to get a coupla things he forgot.
"Aw mate, that stuff," says the resident of Pat's old house, "Didnae know whose that wuz. Just flung it in the Clyde," and he sweeps his arm over the direction of the river.
Pat stares at him, a steady stare.
"Thought it wiz junk," says the guy, with a long steady stare back.
,
"Wind would cut ye like a sabre," muses Pat.
"You're never gonnae forget that, are ye," says I as we hurry along.
Posted by Nihil Sine Labore at 23:01 No comments: 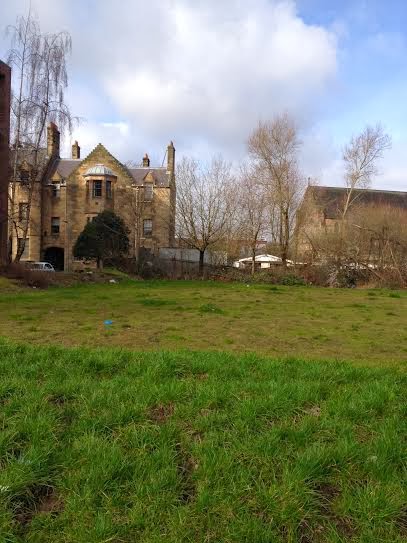 Up above the tenement chimneys, the blue sky glows and beckons us outside into the warm air of Spring. We are drawn down to the streets where our neighbours carry out their morning business with smiling cheer.
"Lovely mornin'," the window cleaner calls out as he sets his ladder against the shop window and breaks into a warbling whistle, his chamois swirling in a bucket of water.
Aul' Jimmy comes out of Watsons with two pies in a paper poke and saunters across to the side door of the Harmony Bar.
It's a task not to say hello to everyone you pass on the way to Govan Cross; let's remember, this is 21st century life and people are a lot more stand offish than they used to be. In spite of this, there seems to be a current of good humour wafting through the air.
Down Water Row, a man is scrubbing a table outside the door of his newly refurbished shop, out on the pavement, enjoying the sun.
At the taxi rank, drivers are outside their cabs, sharing stories and soaking up a few rays.
Walking briskly towards me is a couple of chaps; a wee guy, and a wee'er one. They are dressed down in saggy joggys, down at sole sannies and jerkins. The wee'est one has the extra long smile from corner of mouth to ear, and is saying to the other as they pass me, "Take it fae me, it's the best drink ye'll ever savour ootside the bookies."
Across from the P.I., Govan's green wilderness germinates in today's golden springtime.
Posted by Nihil Sine Labore at 23:12 5 comments:

Shelter From The Storm

Today's weather can't decide whether it's late winter or early spring. You have to walk fast to keep warm, although the sun is shining in a new blue sky, so I hurry down Copland Road, along broken, wet pavements with my scarf tucked warmly round my collar. Above me, the sky rapidly darkens and a stinging sweep of hailstones nips my face. A fierce wind surges and I look quickly for a place to take cover. I see a hand wave me towards the shelter of a close and skip quickly in. A man and a woman wait in the doorway and are in conversation.
"Mon in," he says, "mental oot there."
Horizontal sheets of ice drive past us as we look out.
"It's the apocalypse," she laughs. "Aye, so . . "
He takes up the story from where I interrupted, "So Ah'm thinkin about becomin a Muslim. It's a thing a started thinkin about a while ago. It was when Ah was incarcerated and workin on a farm. Ah just felt it was a good thing and Ah know Ah'd have t' grow a beard n that, but that's something Ah can dae."

The close has a wooden door; it's open and she's leaning against it, and he has his back to the opposite wall, leaning against the green tiles. I feel caught in a private and personal moment and keep looking out to the street. The downpour continues, just rain now, but very heavy drops splattering on the pavement.

There is silence and then she sniffs a bit and says, "Ah'm sure you can dae it. Ah know you can grow a beard."
"Ah had one before," he says and she says, "Aye, I remember you with it."
Another period of silence and the rain begins to lessen and the clouds lift.
I turn around to them, "Think Ah'll chance it," I say.
He nods his head, his arms are crossed and his face is peaceful and smilingly benign.
She remains slumped against the door, and whispers, "Good luck."
Posted by Nihil Sine Labore at 23:28 No comments: