Night creeps into Govan early on this Hallowe'en. Do the shadows in the close seem darker and stranger? Is that footsteps you hear as you walk calmly but oh so quickly up the stairs? An over anxious rat-a-tat-tat on the letterbox gains admission to the safety of a Hallowe'en soiree; dooking for apples, nuts and sweeties in bowls, and eerie lanterns set around the room - pumpkins now replacing tumshies cos howking out tumshies is too much like hard work.
By flickering candlelight, a favourite terrifying tale is recalled and we draw in closer together to listen.
The story's setting isn't spooky; school holidays in the blistering summer of 1976.
Diva's mum and dad go on their first foreign holiday and leave their son and daughter alone with a strict warning there's to be nae perties.
Diva, with her pale skin and red hair, finds the sun doesn't agree with her and invites some friends to a house party in the heat of the day. There's crisps and ginger from the shop, ice cream from the van when it comes round. All the windows are wide open above the street but no air blows through the two rooms and kitchen.
From the press in the bedroom, Diva brings out a Ouija board and sets it on the table. The friends gather round and press their fingers lightly to the glass. No one's quite sure what to do, so there's a lot of laughter, some of it nervous.
In the cool of the evening, the friends cross under the river on the subway and walk about Kelvingrove Park and down Byres Road before returning home.
On the second day, Diva is taking this seriously. Just one pal turns up to sit in the heavy atmosphere of a shady kitchen. It's easier to control the laughter when just two sit at the board and after a few false starts they begin to feel as though the glass is moving on its own, speedily dragging their fingers from point to point. They can scarcely look at each other before a tremendous boom sounds in the bedroom and both jump to their feet in terror and run to the outside door, falling over each other to get out and down the stairs, jumping two and three at a time till they stand in fear in the middle of the street.
Sure it was the wardrobe falling over with a crash, they wait for Diva's brother to come home to re-enter the house, by which time, another half a dozen pals have mustered and they scale the staircase together to inspect the damage done by the poltergeists.
Jackie throws open the bedroom door, the ceiling is high with a single pendant light hanging from the centre. The bed is covered in a pink candlewick, with pattern of green leaves and yellow flowers, smoothed out and neatly tucked under the pillows. Room for one plain wooden bedside table and the wardrobe against the wall. Yes, there it stands, unmoved. Jackie, with the girls trailing behind, checks every corner of the house but there's no evidence of anything that could have caused the unearthly crash.
On the third day, there's a big attendance at the unhallowed gathering. Diva struggles to conjure up the same intensity with so many crowding round the table. A couple get bored fairly quickly and depart, one girl feels frightened and persuades another to get her down the stairs. Just five left and fingers on the glass. Diva asks the question - who was it that made the noise yesterday? Was it a message? Was there something to . . . before she finishes speaking in her strangely high, breathy voice, they are assailed by an ear-splitting racket; clattering and clanging of pots and kettles, banging of cupboard doors and slamming of drawers, cascading metal cutlery and shattering plates resounds through the door and bounces off the walls. With screams and yells, the girls leap up and out of the front door, diving downstairs at a pelt and standing quivering in the street. The safest place they can think of is Elder Park where the sun smiles down on picnics and play.
By teatime, they gather again at the closemouth to await Jackie's return from work. He just shakes his head at them and alights the stairs with a swagger and a smirk and a line of lassies following him up. He emerges from the kitchen with the immortal words, "Ye never washed ma cornflakes bowl. Whit else is new?" Everything stands untouched and unmoved from when he last saw it at breakfast time.

So what was it? What was the noise and the cause of it? All these years on, and Diva testifies it was true. Now, on this Hallowe'en night, how do we get back downstairs without a scream!?!
Posted by Nihil Sine Labore at 23:33 No comments: 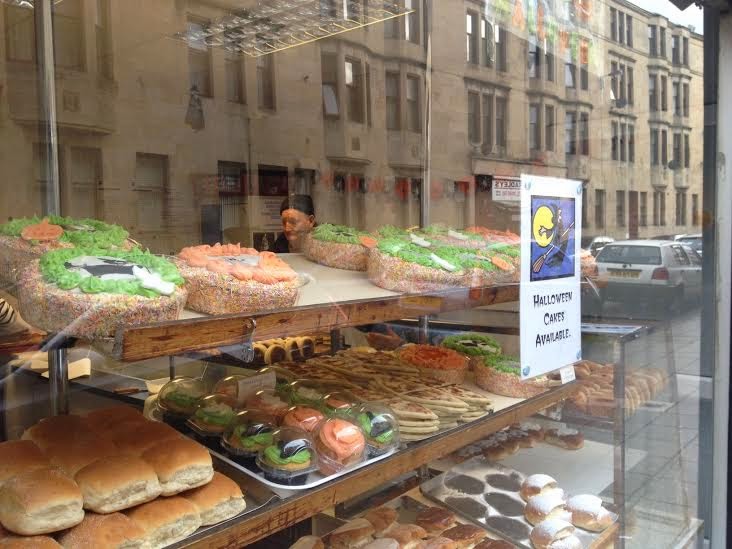 Happy Hallowe'en as they say nowadays. A strange salutation I always think, but can't deny being happy that Watson's Bakery is still open for business and thriving in 2014. New front door and smart wall boards this year and the same delicious rolls, teabreads and cakes. Yes, I did buy a coconut icing bun from the second shelf. 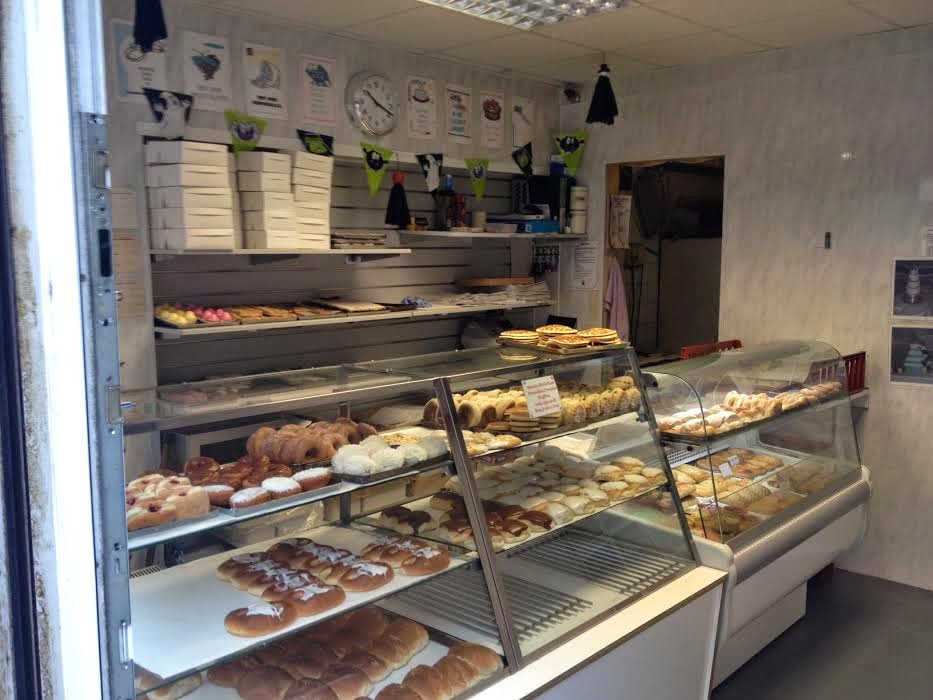 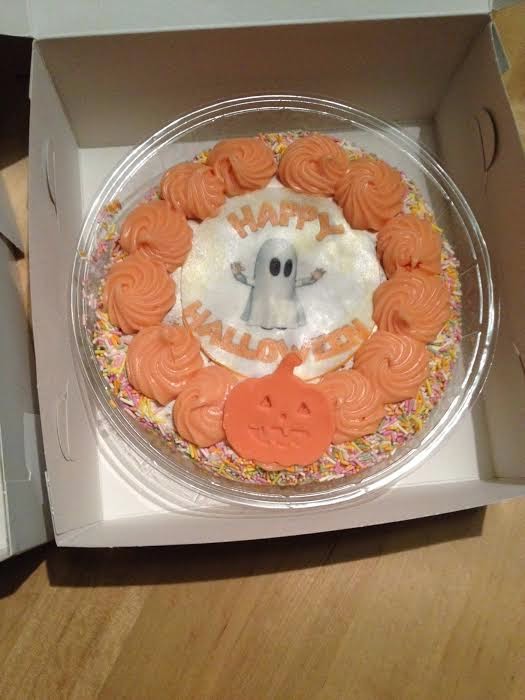 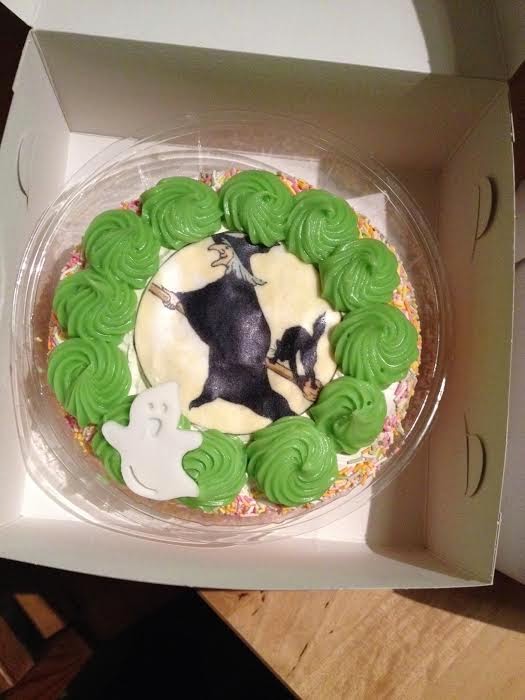 Richards strikes me as pretty ghastly in ghostly grey. I thought for a while that it was just an undercoat, but turns out this is the finished décor. Hellish Hallowe'en. 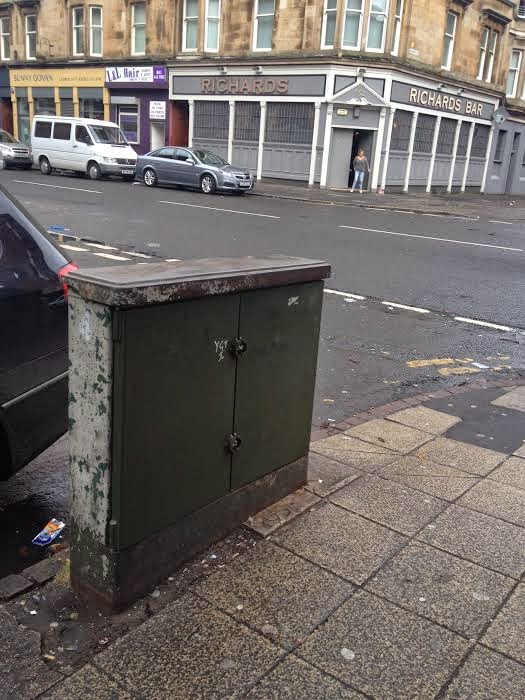 Posted by Nihil Sine Labore at 16:57 No comments:

It's Good To Talk

Techmanology. Sometimes it's just soooo wearying. You can never get away fae people nowadays; constantly on the end of the line, just wanting to talk, just reminding you about this and that, just checking you're still coming, you're still remembering, you're still getting that thing they asked you to get them. Oh, and another thing they've just remembered they forgot to tell you.This poor guy in the household aisle in Home Bargains is stuck on the mobile. I'm perusing the mops and buckets, cleaning cloths and dishtowels and gradually his dejected voice enters my consciousness and eventually I turn round and note his bowed head, hands hanging down, feeble knees. The one sided conversation goes, "Aye, Ah said, in Home Bargains . . Ah'm tryin to hurry up. Uh-huh . . ok Ah will. If you go off the phone Ah'll hurry quicker."I make my selection and walk briskly round to the stationery aisle to look for inkies. Hmm, he's wandered round here too from the other end.
"Ah don't see it . . . Ah do know what you're talking about but there's nothing like it here. Look, Ah'm here and Ah'm lookin and there's none of them here." He sighs deeply. I actually take a moment to stare at him and feel a bit of annoyance well up - but wait, is it really his fault. Just a victim of the moby.
"Ok, Ah'll try the printers on Govan Road. No, Ah told you Ah hadnae been there yet . . . ok ok. Ah'm goin there now. Ah did tell you. Look, you hang up and I'll be back a lot quicker. Right, ok then, just hang up. . . What?" Exasperation sets in. Voice is raised. "Do you want me to go for that before the printers or later on?"
Man alive. I am outta here.
Posted by Nihil Sine Labore at 22:19 No comments:

Lovely to welcome guest blogger, Majj, who like every exile, wends her way to Watson's on a trip home.
Back up from the big smoke. It's just a quick visit. Feels good to be back in sunny Govan, which incidentally is not so sunny, more windy and grey. But these are minor details in the scheme of things.
Before I go to visit my sister and the Govan baby, I pop into the Magpie's Nest for a rifle around. Everyone always seems to pick up a bargain in there, but as I wander around I think that word must have got out. There's not much to be had and I slope out feeling a sense of deep disappointment whilst realising my expectations had been probably been set too high.
Walking up the road I pass by the shops selling Eastern European foods and African foods. It's getting to be like London! I step inside to take a look at what's for sale, but get a few odd stares and puzzled looks as I walk up and down the aisle. Maybe I'm not their usual customer. Just a few tins and packets of coconut milks and hair oils on the shelves, chest freezers of chicken nebs and tilapia fish. Can't see anything very appealing anyway, so slope out, a little disappointed.
It would be rude of me to go to the sister's without something, so drop into Watson's, of course. I'm greeted with a dry but friendly, "Hullo hen." A wee wifey comes in behind me and starts a lively conversation with the shop lady. I get included in it - or maybe I just include myself and we all end up shaking our heads and rolling our eyes to the heavens!
Just as I'm leaving, cakes in their little white box, the wifey says warmly, "Ah like yer hair hen...is that a champagney colour?"
Pleased with myself, I thank them probably more enthusiastically than I need to, take my cakes and leave, feeling fulfilled.
Posted by Nihil Sine Labore at 21:18 No comments:

Some people just can't help playing to an audience, even if one isn't there, well, unless two pals and me leaning against the pawn shop window counts.
The star of the show is tall and slim, hair pulled into a high ponytail which she swings from side to side as she performs. She is fashionable and smart, pristine white tracksuit with pink stripe down the outside leg with matching trainers. Her parka jacket is pulled tight at her waist and she rests her hand on her designer pram, occasionally rocking it as she holds court.

"He's moved in noo," she's saying, "It's a great wee flat, plenty room and a shared kitchen so it's quite good. You've got company if ye wantit"
The audience nods, aw, that's good. Aye.
The girl leans back and swishes her hair, casts her eyes up to the canopy of the Govan Cross shops and back down, then looks left and right to check who's on the street.
"No bad, the other wans in it. He's gettin oan fine wi them."
Aw, that's good.
"He says to me he's just tellin them he's got hepatitis n Ah think they'll a' be fine aboot it."
Och well, that's good.
Posted by Nihil Sine Labore at 20:57 No comments: