"Nice jaiket," croaks a weel kent voice. We glance round, "Oxfam special?"
Ma da nods, "Lookin' dapper yerself, Mr M. Ye'll be getting down to yer last million."
"Aye, D., yer right, got t'look efter yersel'. Ye never know when Death's gaunae take ye," and he shakes his head woefully, "Aaw, aaw, aaw. An' would ye take a look at this place. Think they're diggin' for ile. Don't know how mony bodies have fell doon they pits on the Govan Road noo."
And Mr M. goes on to complain about the new Southern General and the road re-directings and the road re-layings that have been underway for months now.
Never one for gloom, ma da shrugs it off with a laugh, but Mr M. calls him to attention with a solemn "Here! Ah wis at J.D.'s funeral a week past. Wisnae gaunae go, but Ah did."
He shifts his feet, and folds his arms across his double breasted suit jacket, purple silk tie with narrow stripe.
"It's who yer gaunae see therr," he whines in a pained tone, holding ma da in a sombre glare."That's the trouble wi funerals, therr's some o' them at it ye'd rather see in the boax."
Ma da gives a wry smile, "Ach."
"An it wis in the Chaipel." he goes on with further shaking of his head, and with a sideways glance and the flicker of a grin, the octogenarian chortles darkly, "Three times roon wi the boax they wur. Been better jist chergin an entrance fee an be done wi it."
Posted by Nihil Sine Labore at 22:44 No comments: 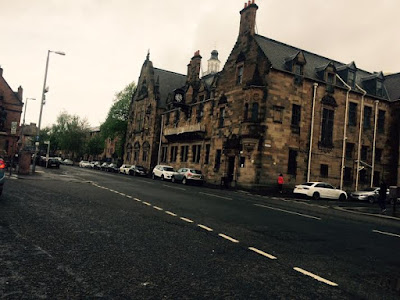 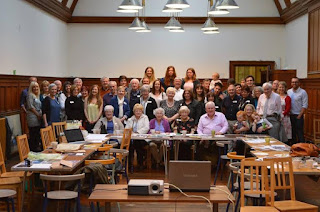 Clan Gathering in Govan today for our kith and kin.
The Billiard Room at the P.I. is a fine setting for our party. Tea, sandwiches, and a variety of cakes keep us going as we pore over photographs, fill in the family tree, catch up and remember times past.
Posted by Nihil Sine Labore at 23:37 No comments:

Tillie Tells A Tale: Remembering VE Day In Govan, 70 Years To The Day

Another favourite story from Tillie, of a night never to be forgotten.

Some people said idea the of the war ending soon was wishful thinking.
I'd heard my parents talking about it and some people on the wireless said it too. But, life went on for me as usual, just going to school and playing outside.

One night, I retired to my bed and fell into a sound sleep when I was suddenly awakened by a loud knocking on the outside door. I jumped out of bed and, as in those days no one was afraid of being attacked, I opened it wide and was delighted to see my mother's younger sister, Auntie Tillie, on the doorstep. Thinking nothing of the late hour of her visit, I led her into our kitchen where she paced in front of the smouldering fire, asking if my parents were in bed.

Just at that, my mummy appeared looking dazed and sleepy.
"What are you doing out of bed?" she asked and then noticing her sister standing at the kitchen door, she turned with a note of fear in her voice, “What’s wrong Tillie, do you have bad news for me?” Auntie Tillie smiled reassuringly as she replied, “No Peggy, it’s all good news. We've heard on the wireless that the War is over for certain. Isn't it wonderful?”
My daddy appeared with a pullover and outdoor trousers over his pyjamas.
In the kitchen we sipped cups of tea and Auntie Tillie chattered about the marvellous celebrations going on in the streets. She opened the blackout blinds, "Come on out Peggy," Auntie Tillie begged, "There's dancing, singing, people have even built bonfires in the road!"
My mummy looked doubtful. "I'd like to Tillie, but I've got the baby," she said, nodding at my daddy who was not one for babysitting.
"Alright Peggy, but let me take Wee Tillie with me, to let her see what is going on. Let her come. She'll love it!"
The answer was no to start with, but my constant pleading and the excitement and joy of the news, as well as my daddy's relief that he wasn't getting left holding the baby, meant that I finally got to go.
My daddy got me ready, putting on my coat and hat and at that, Auntie Tillie and Wee Tillie went out into the night to see the great jubilations of the Scottish people, celebrating the end of a dreadful period of the World at War.

On Broomloan Road, crowds of people joined hands, pulling round and round in big circles, singing wartime favourites like "Run Rabbit Run” and “We'll Meet Again”. Bonfires lit the darkness, and in fine Govan tradition, wooden chairs, tables, chests of drawers and even a wardrobe were being dragged out to feed the flames.
We wandered down to the Govan Fire station, which was at the gusset where Orkney Street joined Broomloan Road. Here, we were amazed to see the American Swing Park had been invaded by adults who had broken the padlocks on the swings which were normally locked up at night. This park got its name for the very popular American swings in it. These swings were a long seat accommodating about eight children seated astride, each holding onto a metal handle fastened across the seat. When we played on them, two big boys would stand at each end holding onto the long metal poles while they worked the swings up to great heights.
Tonight the grownups were back in their second childhoods, swinging, sliding, running and yelling. Everyone was exuberant and the air was buzzing with excitement and sheer joy. No wonder, after six long years of war, bombings, misery from shortage of food and most important of all, deprivation and worry about their sons, husbands and brothers at the front, not to mention the ones whom they would never again see in this world.

I watched the scenes with wonderment, but deep inside I kept thinking about my Uncle Neddy who had managed to survive, and the daddy of one of my friends who was missing in battle.
The other thing on my mind was the sweetie coupons which I imagined were going to be abolished tomorrow. However I was in my teens before that came about.
Posted by Nihil Sine Labore at 23:10 2 comments: