Give Us This Day, Our Daily Bread

Long Friday queue in the Royal Bank of Scotland, now RBS, the bank that likes to say yes.
The premises at Govan Cross are tatty and in need of a lick of paint to say the least.
Along at Water Row, The Bank of Scotland has had a minor makeover and a couple of spruce ups over the time that the Royal has remained the same.
Staff are just as friendly in both banks though and put up with the all sorts of Govan nonsense with great long suffering.

And in today's queue, long suffering is required by the girl standing next to me as we slowly shuffle along to the tellers.
Phone buzzes and she answers. "Aye, the bank. Naw, no yet." Silence. Still with the phone at her ear, she casts her eyes ceilingwards then looks down and repeats, "Naw, no yet."
Another silence while she listens with a frown to a faint voice on the end of the line.
"Well, Ah don't know what ye want for yer dinner. Jist tell us and Ah'll get it."
Silence and we move forward.
"Well, whit dae ye feel like? ... How dae Ah know? , , , Ah don't know what ye want . . . Ah can go anywhere. Aye, Ah can go into Icelands. Ah can go anywhere."

The girl sighs and gently rubs her long, masacaraed eyelashes. "It's ma turn nearly," she says in a low voice, "Phone us back."
Posted by Nihil Sine Labore at 18:26 No comments: 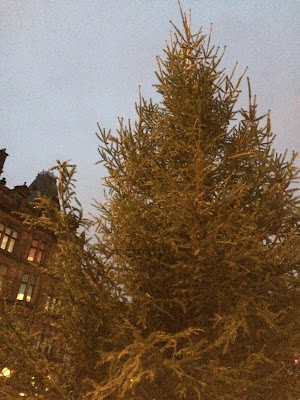 In spite of a series of winter storms, from Abigail to Frank, the Govan Christmas tree has remained standing, well into January and after everyone has taken their tree down. Glasgow city council no doubt hoping it would've been blown into the Clyde and saved them the bother.
Posted by Nihil Sine Labore at 22:19 No comments: